Kenya has been readmitted to the World Rally Championship following the inclusion of Safari Rally in the WRC 2020 calendar.

This comes as good news to Kenyans as WRC Safari Rally Project CEO Phineas Kimathi had last week said that the country needed to be patient to know her fate.

The other two new entrants to return to the world stage include Rally New-Zealand and the season-closing Rally Japan.

Monte Carlo Rally will open the season as is tradition.

“I am glad to see the results of our expansion strategy, with emblematic events such as Kenya and Japan coming back to the WRC calendar next year, alongside New Zealand replacing Australia, while long-standing, iconic European events provide a great balance and preserve the DNA of the sport.

“Following the integration of Chile last year, the 2020 calendar also expands our presence on both the Asian and African continents.

“With the strong interest of many countries to host a WRC round, we had more high-quality candidates than the number of slots available in the calendar, which demonstrates the robust health and popularity of the championship,” Matton said.

He concluded: “Thanks to the new calendar strategy that was put in place following the World Motor Sport Council in March 2019, we are able to announce the WRC schedule earlier than in recent years and in the future we aim to be in a position to publish it in March.”

On his part President Uhuru Kenyatta reminded Kenyans how in 2013 the Government promised to return Safari Rally back to the iconic championship.

“Before my Administration assumed office in 2013, I made a promise to the people of Kenya, to return the Safari Rally back to the International Automobile Federation World Rally Championship family.  This process has taken us seven years.

“It is my pleasure today to announce to the people of Kenya and Africa that this process has been concluded and the Safari Rally has been included in the International Automobile Federation World Rally Championship 2020 Calendar, marking the return of the World Rally Championship to Kenya and Africa, after 18 years of waiting,” President Uhuru pointed out.

The Head of State further thanked President of the International Automobile Federation, Jean Todt, the World Rally Championship Promoter Oliver Ciesla, the Chairman of the Kenya Motorsports Federation, Kimathi and the Directors and Technical teams, for working with the Ministry of Sports to deliver the event that forms part of Kenya’s heritage.

The 2020 calendar is confirmed as follows: 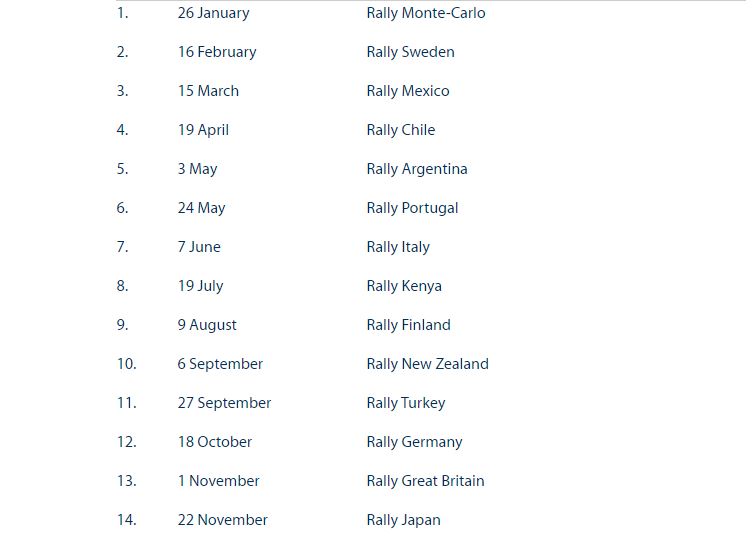 The Safari Rally as it is known today was first held in Kenya in 1953 to commemorate the coronation of Her Royal Majesty Queen Elizabeth II.
It started as the East African Safari Rally traversing the three East African countries of Kenya, Uganda and Tanzania.

Ian Duncan, Patrick Njiru, Jonathan Moi, Vic Preston Jnr, Frank Tundo are some of the local names that used to give to give the big European boys a run for their money.