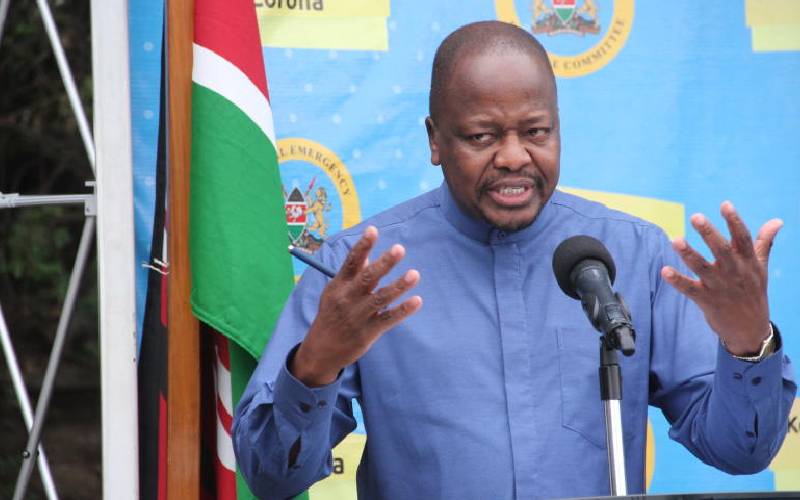 Some 181 people have tested positive for coronavirus in Kenya today after 2,131 samples were tested.
The national tally now stands at 8,067, Health CS Mutahi Kagwe (pictured) said in a statement.
In the new confirmed cases, 179 are Kenyans. The youngest is a four-month-old infant while the oldest is 79 years.

SEE ALSO: Nurses in Zimbabwe arrested as they protest over pay

The highest positive cases were reported in Nairobi (134), followed by Kiambu (19), Mombasa (nine), Kajiado (six), Machakos (six), Lamu (three), Murang’a (two), Uasin Gishu (one) and Kirinyaga (one).
Some 127 patients were discharged, pushing the number of recoveries to 2,414.
However, the death tally now stands at 164 after four more people died.
This came as President Uhuru Kenyatta lifted the lockdown on Nairobi, Mombasa and Mandera.
On April 6, he ordered the first of such containment measures by restricting movement in and out of Nairobi, Mombasa, Kwale and Kilifi counties and imposed a dusk-to-dawn curfew for all but essential service providers.

The efficacy of the restrictions has, however, been dulled by the steep rise in the number of Covid-19 infections in recent weeks.
In the week ending yesterday, July 5, the country had been recording an average of 216 new cases daily.
Today the President announced that movement in and out of Nairobi, Mombasa and Mandera counties will be lifted on Tuesday at 4am in a move expected to avert plunging the struggling economy deeper into turmoil.
The nationwide curfew will, however,  be extended for a further 30 days.
“By reopening (the three counties), we must be cognisant of the fact that we are much more at risk when the restrictions were in place. We must exercise cautious optimism,” President Uhuru told the nation in a televised address from Harambee House, Nairobi.

He said there shall be no movement of public service vehicles into and outside of areas previously under lockdown without the required clearance of the public health and transport departments.
Concerns over the capacity of hospitals in Nairobi to take in more Covid-19 patients are rising amid reports the sick are being turned away from the facilities.
A work colleague to one of the patients who tested positive for the virus on Thursday painted a grim picture of what is happening to newly-diagnosed cases in the city.
She said when her colleague tested positive, his contacts were shared with the Ministry of Health so that he could be picked up and taken to an isolation facility.
“Ministry officials called but they could not get space for him at the Kenyatta National Hospital, Mbagathi Hospital or even Kenyatta University Hospital. He was told all the facilities were full,” she said.

Despite having a severe headache and chest pains, the sick man was told to go back home as health officials worked to get him space into the overwhelmed system. By Sunday evening, he was still waiting for instructions on how his condition would be managed, even as the situation worsened.
Government spokesman Cyrus Oguna has in the past said they were working with medics to ensure patients who had been admitted to hospitals but were not seriously ill, are discharged for home-based care to free up space for others who are seriously sick.
The Ministry of Health has denied knowledge of anyone turned away from hospital, saying there were still beds available in Nairobi, and that they would do an audit to establish the number of unoccupied beds.