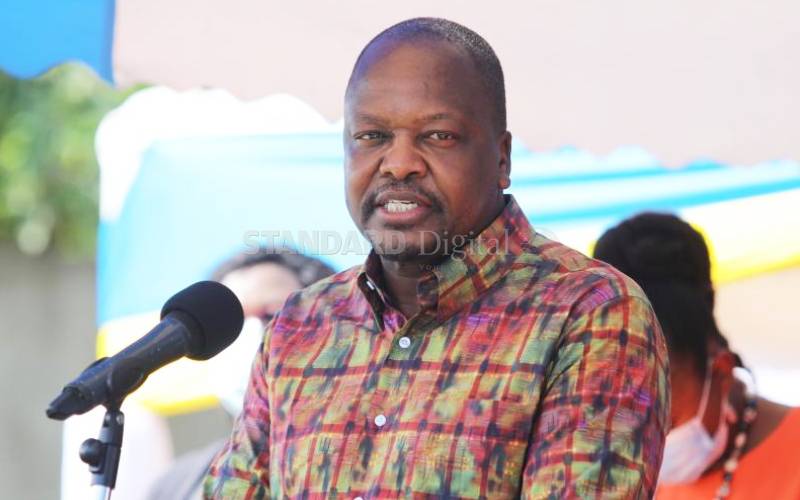 Some 379 people have tested positive for coronavirus in Kenya in the past 24 hours.
In a statement to newsrooms on Sunday, Health CS Mutahi Kagwe (pictured) said out of the 7,050 samples tested, 376 Kenyans tested positive with an age range of two years old to 97 years old. The other three were foreigners.
Further, 49 patients were discharged, bringing the total number of recoveries to 2,881.

The national infections tally now stands at 10,105.
Nairobi led with the highest infections recorded in the last 24 hours with 209 cases followed by Kiambu (49), Busia (38), Migori (19) and Kajiado (12).
At the beginning of the pandemic in the country, Nairobi and Mombasa always led with the new infections. At some point, Governor Hassan Joho read the riot act to residents whom he said were flouting guidelines set in place by the Health ministry to curb virus spread.
Mvita residents, especially, were warned against violating the regulations.
In the latest report, Mombasa only recorded 16, but nine of them were from Mvita.

The case in Kibra was slightly different, where 52 people tested positive for coronavirus.
The guidelines on hygiene, hand washing and physical distancing have been criticised as residents questioned how practical they are in the slum areas.
The houses are built in close proximity and clean running water is a luxury many do not experience.
One more patient succumbed to Covid-19, pushing the national death tally to 185.
Vulnerable healthworkers

Meanwhile, medics have come out to express their fears of contracting coronavirus after the death of one of them, as they accused the Government of being unresponsive to their pleas.
Led by the Kenya Medical Practitioners and Dentists Board, the medics said healthcare workers were not assured of their safety as they battle the disease on the frontline.
They lamented that even after President Uhuru Kenyatta directed for an insurance and allowances to be provided for them during the onset of the disease in the country, nothing has been done so far.
KMPDU Secretary General Chibanzi Mwachonda said the death of Dr Doreen Lugaliki had demoralised medics as there is no clear framework on how healthcare workers would be treated after being exposed to the virus.
The Government has set aside a 100-bed capacity ward at Kenyatta National Hospital specifically to treat medics infected by the SARS-CoV-2 virus.
“Health is a shared responsibility between the national and county governments. Yes, we have a facility at KNH, but what about the counties?” asked Dr Mwachonda.
Mwachonda said at the moment, medics are afraid for their lives and the lives of their dependants.