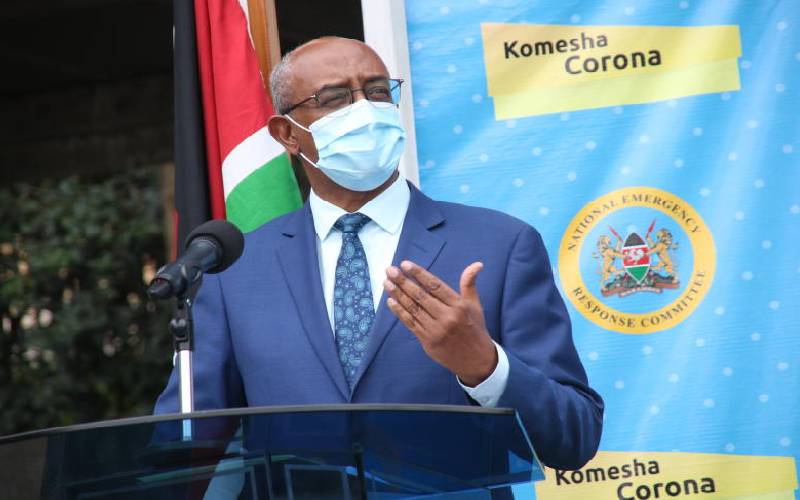 Kenya has recorded another 90 cases in the last 24 hours bringing the country’s tally to 3,305, Health CAS Rashid Aman has announced.

Speaking during the daily update on the Covid-19 situation in the country at Nairobi’s KICC Building, Aman (pictured) said the ministry tested 2,419 samples raising the country’s tally of samples tested to 108,666.
Aman said four more patients succumbed to the disease bringing the total number of fatalities to 96.

Of the new cases, 62 are male while 28 are female with the youngest age being 14 and the oldest youngest 80.

All the new cases are Kenyans.

Of the new cases, Nairobi County has 36 followed by Mombasa with 34 as Busia recorded 12, Uasin Gishu (3) while Kilifi, Meru, Turkana, Kisumu, Garissa counties have one case each.

In Busia County, all the 12 cases are from Malaba border point.

One case in Garissa is from Garissa Township, Kisumu case is from Kisumu Central.

On a positive note, Aman announced that 72 patients were discharged from hospital bringing the number of recoveries to 1164.

“It is good news every time we see many recoveries he said. It is an in and out process so the more we discharge the more we will be able to admit others in case our numbers rise,” he said.

“We have said before that to contain the spread of the virus, we have to wear masks, keep the social distance and wash our hands,” he said.

The CAS said the high number of positive cases being recorded in the past few days is as a result of the rising sample size.

Aman said the briefing was done at KICC to launch a blood donation campaign in preparation for World Blood Donor Day to be celebrated on June 14.

He said the exercise is key because Kenya needs to collect enough blood for its use has faced challenges in the past.

He thanked firms who have partnered with Kenya National Blood Transfusion Services in the campaign to donate blood to save lives of other Kenyans.

He said Kenyans have expressed their willingness to donate blood through social media and other avenues.
Aman encouraged many Kenyans to come out in their large numbers to participate in the exercise to save the lives of others.