President Uhuru Kenyatta wound up his Kisumu tour signing off with an expensive joke that will live in the memory of many Kenyans. A joke which could end up being referenced in the political circles as a sign of his love affair with the region that overwhelmingly voted for his rival-turned-ally Raila Odinga in 2017 General Election.

While addressing the charged crowd alongside ODM leader Raila Odinga, among other local leaders; Uhuru said he could consider having another wife in the county if his wife permits him.

“I was telling Raila that I was wondering if First Lady Margaret could allow me to have another wife here to tend to my needs whenever I am here. So that I can make trips knowing where I will eat, or what do you think?” he posed, jokingly.

The leaders and the crowd burst into laughter as Kisumu Senator Fred Outa ticked the air in applause.

The Head of State jetted in Kisumu on Wednesday ahead of a packed day on Thursday. He was to be accompanied by Mr Odinga in inspecting the projects initiated in the county.

The President toured the city to launch Kisumu Port, Uhuru Business Park, Jomo Kenyatta Stadium and renovation of Jaramogi Oginga Odinga Sports Ground. The Uhuru Business Park which is named after him is a Sh350 million market that will be used to settle traders earlier displaced during the construction of the port.

Apart from the daylong inspection of the projects, the leaders took the message of the Building Bridges Initiative to the locals, urging them to support the constitutional amendments raised in the report.

“Please support the BBI report so that we unite Kenya,” Uhuru said while addressing the crowd at Jomo Kenyatta Sports Ground.

Uhuru then fronted an argument that some of the issues raised in the BBI report did not warrant being subjected to a referendum. He added that the report will benefit the youth, women and other social groups of the society.

Raila also joined him in championing for the support of the BBI.

“We were in Kisii County yesterday. The constituents promised overwhelming support for the BBI and they said they want Nyanza region to speak with one voice. I am urging Kisumu to be the first county to lead the charge. Are you ready,” he asked the crowd. 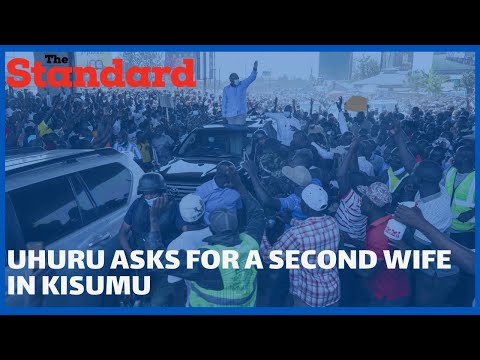