Cheetahs are set to roam in India for the first time since they were declared officially extinct in 1952.

A group of eight cats arrived from Namibia on the occasion of Prime Minister Narendra Modi’s birthday on Saturday.

They will undergo a month-long quarantine before being released in a national park in central India.

Cheetahs formerly shared jungles with other big cats like lions and tigers but disappeared 70 years ago.

They are the world’s fastest land animals, capable of reaching speeds of 70 miles (113km) an hour.

This is the first time a large carnivore is being moved from one continent to another and being reintroduced in the wild.

At least 20 cheetahs are coming to India from South Africa and Namibia, home to more than a third of the world’s 7,000 cheetahs.

The first batch of eight – five females and three males, aged between two and six years – arrived from Windhoek in Namibia to the Indian city of Gwalior on Saturday.

Wildlife experts, veterinary doctors and three biologists accompanied the animals as they made the transcontinental journey in a modified passenger Boeing 747 plane.

From Gwalior, the cheetahs were transferred by helicopter to Kuno National Park in Madhya Pradesh state, where they were released by a delegation led by Mr Modi.

Spread over a 289-square-mile area, the Kuno National Park is a sprawling sanctuary with prey like antelope and wild boars for the wild cats.

An electrified enclosure, with 10 compartments ranging in size, has been built for the animals to quarantine before being released in the wild.

Each cheetah will be given a dedicated team of volunteers, which will monitor it and keep tabs on the animal’s movement. Satellite radio collars have been put on each cheetah for their geolocation updates.

Experts say that a combination of hunting, habitat loss and food scarcity had led to the cheetah’s disappearance in India.

Studies show that at least 200 cheetahs were killed in India, largely by sheep and goat herders, during the colonial period.

Some of them were eliminated through bounty hunting because the cats would enter villages and kill livestock. The cheetah is the only large mammal to become extinct in the country since its independence from British rule. 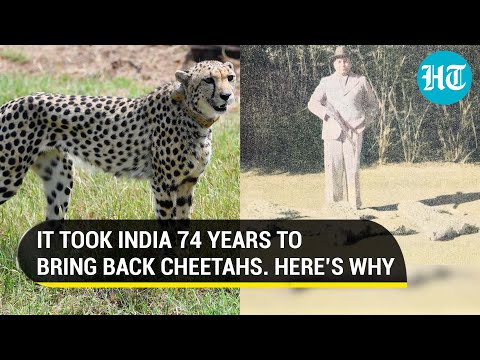 India has been making efforts to reintroduce cheetahs since the 1950s. An effort in the 1970s from Iran was unsuccessful after the Shah of Iran was deposed and the negotiations stopped.

Proponents of the project say that the reintroduction of cheetahs will build up local economies and help restore ecosystems that support the big cats.

But some worry that relocation of animals is always fraught with risks and releasing the cheetahs into a park might put them in harm’s way.

Cheetahs are delicate animals who avoid conflict, and are targeted by competing predators. And the Kuno park has a sizeable leopard population which could kill cheetah cubs.

There is also a possibility that the cheetahs can stray outside the boundaries and get killed by people or other animals.

However, officials say the fears are unfounded as cheetahs are highly adaptable animals, and claim that the shortlisted site has been fully examined for habitat, prey and potential for man-animal conflict.

The first cheetah in the world to be bred in captivity was in India during the rule of Mughal emperor Jahangir.

Much later, research suggested the number of cheetahs had dropped to a couple of hundred by the 19th Century – and the cat was reportedly sighted for the last time in India 70 years ago.