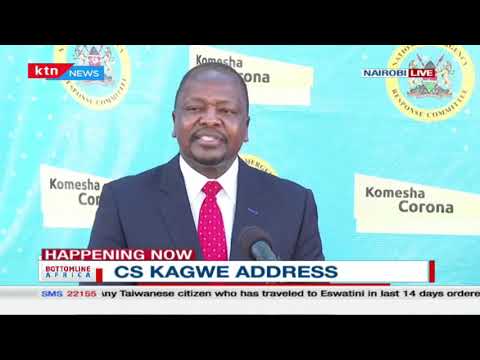 Health Cabinet Secretary Mutahi Kagwe has urged parents who are infected with the coronavirus to shield their children so as to reduce cases in schools.

This is after he confirmed that one student had tested positive for the disease on Wednesday.

The Ministry believes that the students contracted the virus while at home since the father is in isolation.

“I ask parents who are infected to keep children at home so that health workers can carry out tests on them to ensure they do not report to school while sick,” Kagwe said.

The CS further confirmed that some 123 more people have tested positive for the coronavirus today, from a 4, 948 sample size conducted in the last 24 hours.

Kagwe announced that the country’s cases are now 98, 555.

A total of 1,102,595 samples have so far been tested since the first case was confirmed in Kenya last year.

Wednesday’s cases attracted one hundred and eleven Kenyans and 12 foreigners.

As per the Covid statistics in Kenya, the CS said that the disease is more prevalent in men more than women, as 74 and 49 tested positive respectively.

Additionally, 412 patients have recovered from the disease.

“Three hundred and seventy eight were under the home-based care while thirty four were discharged from various hospitals,” he added.

Kagwe (pictured) expressed optimism in getting the Covid-19 vaccine in the country as early as February.

“We have engaged various institutions leading vaccines expected in Kenya in February. We are not using one type of vaccine. There is no mandatory vaccination and the first group to get the vaccine will be health workers, police and teachers,” Kagwe said.

The CS also lauded efforts to maintain the positivity rate but urged Kenyans to continue observing the Health ministry guidelines, considering most people are returning to towns from the holidays.