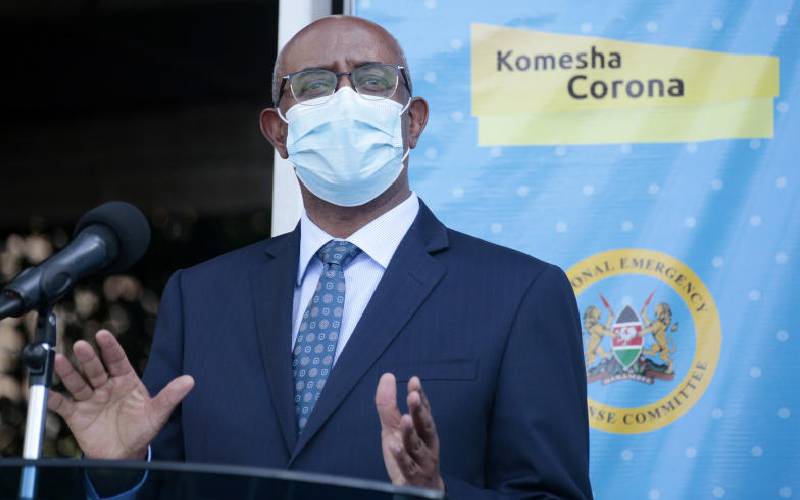 Kenya has recorded another 72 Covid-19 new positive cases in the last 24 hours raising the country’s national tally to 2,093, Health CAS Rashid Aman has announced.
Aman (pictured) said Kenya has so far tested 82,946 samples after the ministry tested 2892 in the last 24 hours.
Nairobi has 39 cases, Busia 13, Mombasa (eight), Kajiado (four), Migori (three) while Garissa (two) and Kiambu have two cases each with Kisumu, recording one case.

SEE ALSO: Let us create a country all of us can be proud of

In Nairobi, Kibra 16, Embakasi South (8), Westland (five), Ruaraka (five), Langata (two), Embakasi West, Starehe and Dagoretti North have one case each.
In Mombasa, Mvita, Changamwe and Kisauni have two cases each while Likoni and Nyali have one each.
In Kajiado, three cases are from Namanga border point while one case has been reported in Kitengela.
For Migori County, Aman said that all the three new cases are from Isebania border point.
In Garissa County, the two are from Garisa town while Kiambu, the two new cases were found in Githunguri.

SEE ALSO: Kemri runs out of reagents amid protests by returnees

The single case in Kisumu County is from Kisumu Central.
In Gender distribution, Aman said 50 of the new cases are male while 22 are female aged between 11 and 73.
On a positive note, 17 patients have been discharged bringing the total number of recoveries to 490.
“We appreciate our health workers for doing a good job, it is through their efforts that we have saved many lives,” he said.
On a sad note, the CAS said that two patients died of the coronavirus diseases bring the number of fatalities to 71.

Aman urged truck drivers to observe the protocol put in place to avoid congestion at entry and exit of border points.
“Truck drivers have to test 48 hours before departing for the journey and can only leave after having the Covid-19 negative certificate in hand,” he said.