The new ship from upmarket Azamara is a small (684 passengers), a classic vessel that has been given a swish, stylish makeover, a world of earthy shades, warm greys and browns, like aged timber, with touches of olive green.

As befits Azamara Onward’s style, the ship was christened at the quayside in Monte Carlo on May 2, with the first official cruise departing the following day. A multi-million-pound revamp created the feel of Azamara’s other three ships ready for a summer of Mediterranean voyages.

Azamara Onward has an unassumingly elegant feel, whether in the restaurants or in the bars (where most drinks are included in the fare) as well as the accommodation, divided between staterooms and suites.

This is cruising without the fuss of much bigger ships, for people who appreciate the finer things in life but like a cruise for what it is, rather than searching for a frenetic resort experience. The pace of life is relaxed, and due to the ship’s modest size, it can get into smaller ports – on our pre-inaugural trip, it docked right by the Old Port in the heart of Marseille rather than the terminal used by most cruise ships a couple of miles away.

Your stateroom or suite

Our room had a modest balcony with a table and comfy chairs, a TV with UK news channels (and Sky Sports News), a kingsize bed, a sofa, a desk and a decent wardrobe space. The shower room wasn’t large but nicely appointed with flooring designed to look like floorboards. There was a fridge but no coffee or tea maker. There are some rooms without a balcony and a few without windows.

There are several levels of suites with Club Ocean suites opening onto big balconies at the front of the ship while the top-ranking Club World suites sit at the back. There are also two Spa Suites. Suite guests get unlimited access to the speciality restaurants (there’s a charge for stateroom guests). Suite accommodation comes with wifi while for stateroom guests it costs $19.95 a day – around £110 for a seven-night cruise

The main restaurant is Discoveries, ship-wide, with lots of dark wood and chandeliers. The menu includes a choice of half a dozen starters and main courses, with plenty of seafood. There’s also a list of always-available dishes, including prawn cocktail, Caesar salad, salmon and New York strip steak and fries plus daily world cuisine specials such as the Taste of the Mediterranean Day featuring swordfish with tabbouleh, Greek lamb chops and fig almond olive oil cake.

Windows Café (with its suntrap rear veranda) is a buffet by day with fulsome breakfast options, from egg and bacon to world dishes including chickpea fritters, taking in fruit, meats and cheese. At lunch a range of options includes veggie curries. Just outside the door is The Patio, a deck grill with burgers, chicken and lamb skewers and plenty of salads – eat at the shady tables around the pool or in Windows.

After dark Windows becomes an a la carte restaurant with daily themes such as French, Italian and Mediterranean; our dinner on the veranda under a golden sunset was a delight.

There are two extra-charge restaurants, Aqualina (Italian) and Prime C (steakhouse,) either side of ship at the rear. Cost is $30 for the food unless you’re in a suite, in which case it’s free. At the far end of Aqualina is a chef’s table, each offering a seven-course tasting menu, $95. 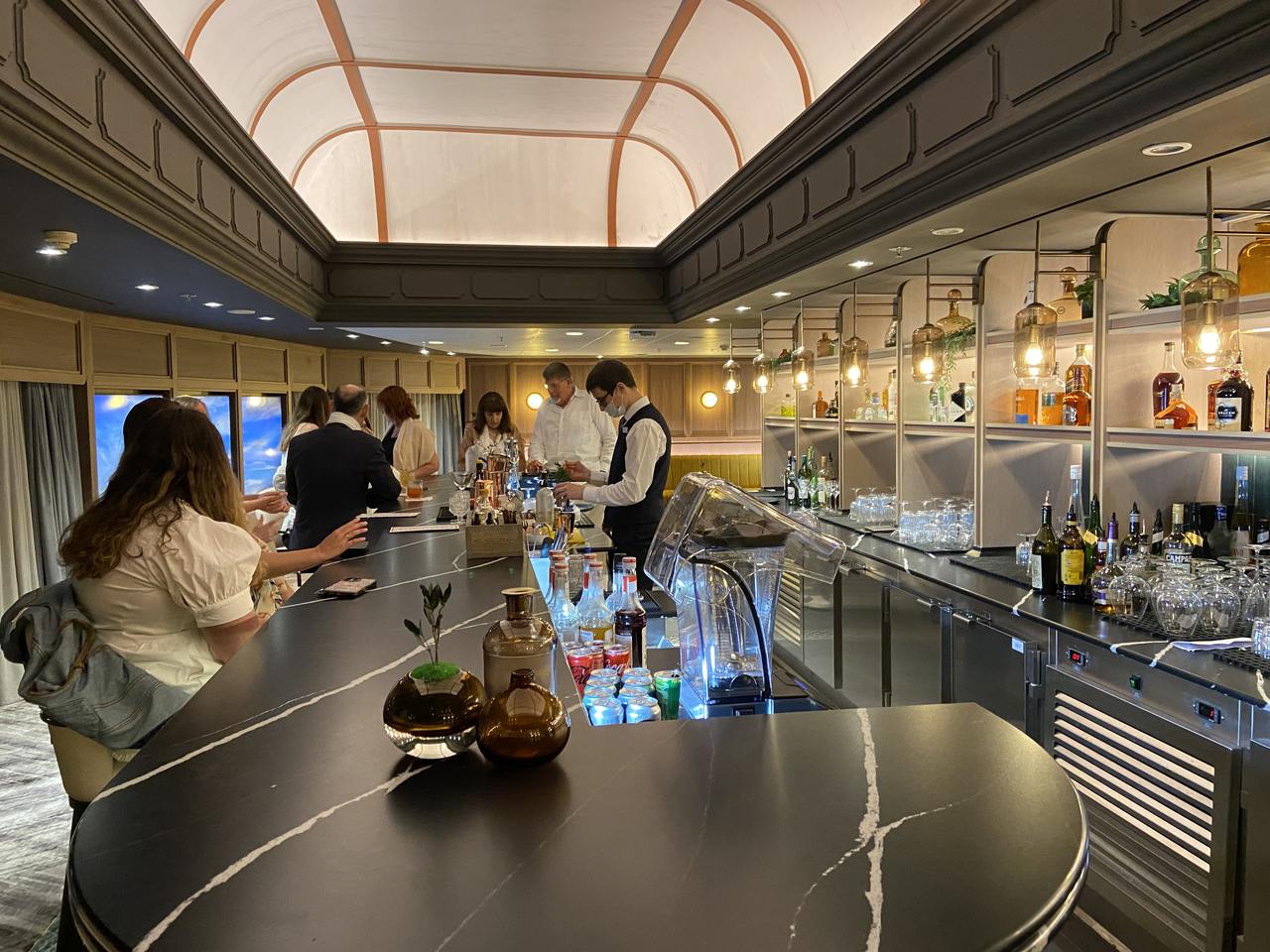 Between the two is the small, sophisticated Atlas Bar, cocktails only, from a select list (such as Heart of Azamara: vodka, strawberry puree, lime juice, passionfruit nectar, Galliano and absinthe), each $17.95. Small plates such as smoked lobster carpaccio are also available to buy.

The main bar is The Living Room, a large lounge where the evenings can become lively.

The Den is a quieter bar with a nightly pianist.

The main deck has a small pool and a couple of hot tubs surrounded by sun loungers. The Sanctum spa has a steam room, sauna and rooms for treatments including massage (a 50-minute Swedish massage is $149) and acupuncture. There’s a decent glass-walled gym, free to all, with free spin and yoga classes. The outdoor thalasso pool and deck is free, but limited to suite guests and those booking a treatment. The upper deck has a walking/jogging track. The Drawing Room is a comfy space to retire to with books and games to borrow. In each port there is a selection of excursions, often sampling the best an area has to offer – such as our wine tasting and lunch at the boutique Buranco vineyard just in from the Italian coast.

The ship doesn’t overwhelm with live acts. There’s no theatre but shows take place in the Cabaret Lounge. A team of singers and dancers put on easy-going shows – we saw the Groove Tonight disco party and other new shows include Club Crooner (Sinatra and more) and Amped Up (70s rock).

‘AzAmazing Events’ are promised to feature local acts on days with late departures. The Filipino band East Pearl play sharp rock and pop favourites on deck as the sun goes down and in The Living Room later in the evening. Other musicians play in various places and then The Living Room turns into a late night club.

Azamara Onward holds a spectacular White Night deck party, with guests urged to wear white, on all cruises of a week or more. We were docked in Monte Carlo with its breathtaking backdrop while the pool deck was filled with banners, flags and white-clothed tables. The Onward Orchestra were playing as we were plied with fizz in a cocktail party atmosphere. Then we were urged to find seats and head for the buffet – but what a buffet. There was a big barbecue element with chicken, steaks and even piles of lobster tails cooked on real Weber charcoal grills. Apart from plenty of lobster I had a delicate version of bouillabaisse, the French seafood broth, as well as a heap of moules mariniere and there was much more, the party going on well after dark.

Azamara has for a while offered AzAmazing Evenings, celebrations of local food and culture, and with Azamara Onward debuted an AzAmazing Day. In pastel-hued Porto Venere on the Italian Cinque Terra coast Azamara all but took over the town, with the help and enthusiasm of the locals.

On the quayside, from early morning, a glamorous pianist played as waiters served free pizza, cake, bread and cheese along with sparkling wine – and the most wonderful espresso and cappuccinos. Below the church on its harbour-entrance hill an opera singer performed, in a tiny square in a tinier backstreet, a saxophone trio played curious jazz and elsewhere an accordion/double bass duo played something splendid that sounded like classical music from another planet.

Azamara Onward is spending the summer in the Mediterranean then heading to the Caribbean for the winter. A seven-night France Intensive Voyage from Barcelona to Monte Carlo, departing October 29, 2022, and calling at Marseille, Nice, Sete, Portes-Vendres and Corsica, starts at £828pp, cruise only, including drinks.

A smartly unassuming ship where the level of refurbishment has taken things to a new level while not disguising the fact that this is a vessel nearly a quarter of a century old. But that’s part of the attraction, a ship that feels like a real ship. Service is excellent and the food is top-notch – and with drinks included there’s little need to buy a package unless you crave vintage wines or craft gin.

Why You Should Never, Ever Drain Your Pasta In The Sink

Why Reheated Coffee Tastes So Bad, And What To Do Instead