The Directorate of Criminal Investigations (DCI) on Thursday said they had commenced investigations after two men were captured on CCTV robbing a pedestrian in Kilimani in Nairobi.

The chilling early morning robbery shows a well-clad man being robbed at gunpoint by two thugs, one wielding a gun and the other a knife.

The man, who was walking on the sidewalk carrying a black backpack, was ambushed by two men who could not easily be identified as they wore hoodies and masks.

The video clip was circulated on social media calling for enhanced security in the area before being picked up by DCI who acknowledged receipt.

“Detectives based at Kilimani are in receipt of this footage and have commenced investigations to bring the culprits to book. Thank you for sharing this,” DCI said.

When contacted on the phone by Nairobi News, Kilimani Sub-county Police Commander (SCPC) Lucas Ogara said that the victim was yet to report the incident, but added that they had started investigations.

The victim did not resist

In the clip, the victim did not resist and stayed calm as the two robbers took his bag and went through his pockets.

One of the thugs still hit him on his face with the gun as the other holds a knife to his chest. 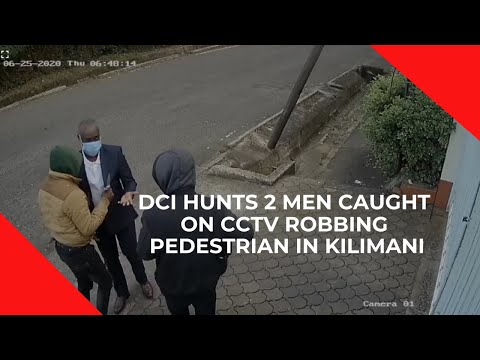 Philip Ndolo, the Nairobi County police boss, said that since cases of civilians being attacked each morning were on the rise, officers have been deployed to deal with the situation.

“The cases have been reported several times, and for that matter, we decided to send several police officers to deal with the situation,” Mr Ndolo said.

The officers managed to recover several mobile phones that the duo had stolen from members of the public and a homemade gun.

Since the outbreak of the Covid-19 pandemic in the country most Kenyans have been undertaking several forms of exercising which include early morning jogging.