The Israeli military launched another series of air raids on the Gaza Strip early on Monday, hours after Israel’s caretaker Prime Minister Benjamin Netanyahu said the attacks on the Palestinian enclave would rage on.

Explosions rocked Gaza City from north to south in a bombardment that was heavier, wider and lasted longer than the air raids that killed at least 42 Palestinians and wounded dozens more on Sunday.

One Palestinian was reported injured.

At least 192 people, including 58 children and 34 women, have been killed in the Gaza Strip since the latest violence began a week ago.

Earlier, Hamas, the group that governs the Gaza Strip, fired rockets towards the Israeli cities of Ashkelon and Beersheba. Israel has reported 10 dead, including two children.

The UN Security Council met on Sunday to discuss the violence but failed to agree on even a joint statement of concern.

China said it was the United States that obstructed the council from speaking “with one voice”.

Here are the latest updates:

Members of the Bosniak government have criticised Israeli Prime Minister Benjamin Netanyahu for including Bosnia as one of the countries supporting Israel’s bombardment of Gaza.

“My message to Prime Minister Netanyahu is that Bosnia and Herzegovina does not and cannot support the killings of innocent civilians in Gaza by Israeli military forces,” said member of the country’s presidency Sefik Dzaferovic.

“Bosnia and Herzegovina only supports peace and efforts to reach a just solution for Palestine and Israel. No violence leads to lasting peace and stability. On the contrary. We call for and support an immediate end to attacks in which innocent people are killed,” she said on social media.

The Israeli military says it has carried out air raids destroying 15 kilometres (nine miles) of Hamas tunnels in the Gaza Strip and the homes of nine alleged Hamas commanders. 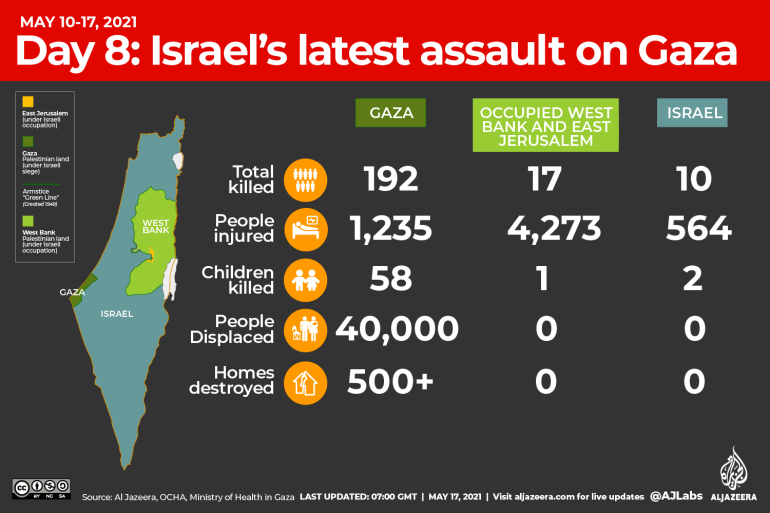 Almost three children in Gaza have been injured every hour since violence flared on Monday, according to Save the Children.

In the last week, at least 58 children in the enclave territory and two children in southern Israel have been killed. More than a thousand people in Gaza, including 366 children, have also been injured.

“How many more families need to lose loved ones before the international community takes action? Where can children run to when airstrikes rain down on their homes?” said Jason Lee, Save the Children’s Palestine country director.

“Families in Gaza, and our staff, are telling us that they are at breaking point – they are living in hell with nowhere to seek refuge and seemingly no end in sight,” said Lee. 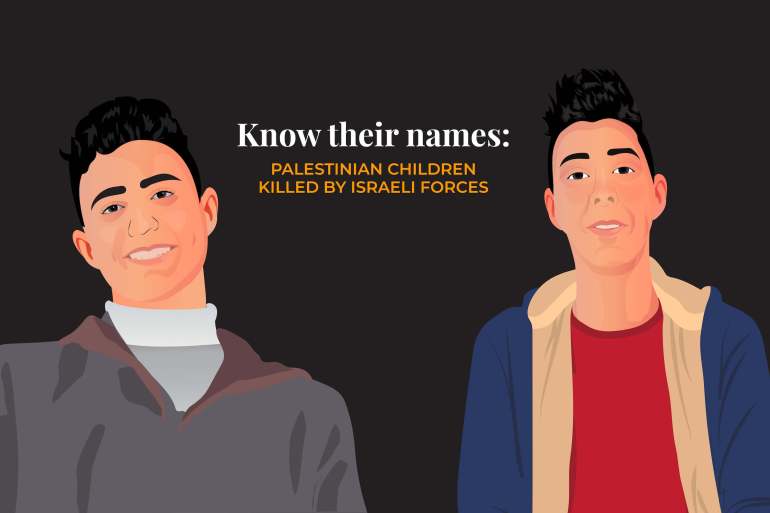 Following a meeting between the two diplomats, Qureshi “categorically” condemned the Israeli army “continuous and indiscriminate attacks” that have resulted in nearly 200 victims in the besieged Gaza Strip and the occupied West Bank.

The Gaza Electricity Distribution Company says there were power cuts in “large areas” of Gaza City after Israeli attacks damaged a line feeding electricity from the only power plant to southern areas of the city.

In a Facebook post, the company said its crews were trying to repair the line, adding that it had been repaired more than once in the week since the bombardment began.

Canadian Prime Minister Justin Trudeau condemned what he called “despicable rhetoric and violence” after pro-Israeli and pro-Palestinian protesters clashed during demonstrations in Montreal.

“Everyone has the right to assemble peacefully and express themselves freely in Canada,” he said in a tweet. “But we cannot and will not tolerate antisemitism, Islamophobia, or hate of any kind.”

Everyone has the right to assemble peacefully and express themselves freely in Canada – but we cannot and will not tolerate antisemitism, Islamophobia, or hate of any kind. We strongly condemn the despicable rhetoric and violence we saw on display in some protests this weekend.

Earlier in Montreal, police in riot gear had used tear gas to disperse crowds after fighting broke out between pro-Israel and pro-Palestinian protesters in a central city square.

Today’s protest for Palestine in #Montreal made me proud yall- pic.twitter.com/4lF0w9ewTp

There were no other reports of injuries, and the Associated Press news agency said there was little information on the extent of damage inflicted on the Gaza Strip early on Monday.

“It appears that the scale of the fire of the Palestinian fighting group is linked to the strength of the Israeli fire,” he added.

Israel’s latest air bombardment of the Gaza Strip was “heavier, on a wider area and lasting longer” than the raids 24 hours earlier that killed at least 42 Palestinians.

Al Jazeera’s Safwat al-Kahlout, reporting from Gaza, said there has barely been “one hour of peace” and that Israeli drones were “hovering overhead, controlling the skies”.

US President Joe Biden says his administration is in touch with Palestinians and Israelis to work towards a sustained calm.

“We also believe Palestinians and Israelis equally deserve to live in safety and security and enjoy equal measure of freedom, prosperity and democracy,” he said in a pre-taped video aired at an event on Sunday marking the Muslim Eid holiday.

“My administration is going to continue to engage Palestinians and Israelis and other regional partners to work toward sustained calm.”