A statement from Capitol Hill said Waruguru was now willing to work with Mr. Odinga and President Uhuru Kenyatta on critical national issues, including constitutional reforms and ensuring the unity of the nation and fighting the coronavirus.

“At this moment in our history, it is critical that we approach our search for solutions not as members of this or that party or tribe but as Kenyans. The President needs support and the country requires unity,” Mr. Odinga said.

He further commended the MP for being ‘courageous and strong’ and welcomed what he termed as her commitment.

The ODM leader emphasised the need for leaders to work together particularly because of the difficulties the country is going through with COVID-19 and the attendant economic meltdown.

He also challenged the MP to bring on board more of her colleagues to embrace the Building Bridges Initiative (BBI) which according to him ‘is a good reform agenda for the country’ and further appealed particularly to women leaders to take a leading role in helping Kenyans fight COVID-19.

In a rare show of camaraderie, Waruguru—who is known to have been a fierce critic of the Uhuru-Raila handshake–was all smiles as she stood next to the former Prime Minister for a photo session after the talks. 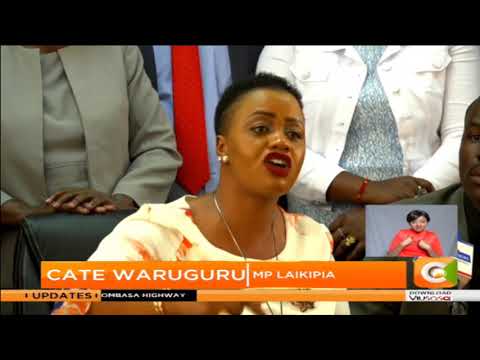 In March last year, Catherine Waruguru was part of legislators who accused Mr. Odinga of instigating a plan to impeach DP Ruto.

The MPs further lashed out at Siaya Senator James Orengo accusing him of being Mr. Odinga’s gun for hire.

They even dared Mr. Odinga and his allies to present a motion of impeachment while eluding confidence that it would not see the light of day.

While rubbishing corruption allegations against DP Ruto, Waruguru noted that there had been no arrests and she further threatened to ‘expose’ the former PM.

He accused them of turning their backs on him after running on his wave to clinch their parliamentary seats.

An irate President Kenyatta further threatened to crush them politically for allegedly sabotaging his legacy agenda.

At the time, the Kenyatta succession scramble had split the Jubilee Party into two: Tanga Tanga which is allied to DP Ruto and Kieleweke that claimed to insulate Kenyatta’s legacy term from early campaigns.

“Mr. President, how are we able to continue together if we shout at each other in public? We continue fighting Jubilee in-house party issues instead of sorting them out in private…also make sure that Raila and his affiliates don’t take advantage of the handshake to continue divisive politics in Jubilee…how can you say we handshake person A, and lock out B?” Waruguru said in response to Uhuru’s sentiments.