The government is on the spot for applying double standards in the enforcement of Covid-19 prevention protocols, giving preferential treatment to particular politicians and well-connected individuals.

This was evident in Health Cabinet Secretary Mutahi Kagwe’s backyard in Mukurweini, Nyeri County where more than 400 people were allowed to attend the funeral of a retired teacher on Friday.

The government set out regulations banning all social gatherings specifically limiting the number of mourners attending a funeral to 15 close relatives.

However, for this particular funeral, a crowd of more than 400 locals from the Kihate area were allowed to gather at Mutwewathi Primary School grounds right under the watch of police, leaders and even senior ministry of health officials.

Health Ministry Director General Patrick Amoth led a delegation from the ministry to represent CS Kagwe who was also expected to attend the ceremony.

A contingent of police officers from the National Police Service and the Kenya Forest Service had been posted at the venue to beef up security.

About 20 ushers had been posted at the entrance to screen mourners and hand out face masks to locals, many of whom showed up without.

Hired goons were also later deployed with apparent instructions to separate the crowd from journalists and bar the press from accessing the school grounds.

Journalists from the Daily Nation, Joseph Kanyi, and NTV’s Melita Ole Tenges and Charles Muriithi were roughed up by the rowdy youth backed up by a gun-toting KFS officer for recording proceedings of the funeral.

They were demanding that the scribes delete all recording and photos they had taken.

“We are here to observe just how the government is enforcing its own directives. It is sad to see police officers harass journalists for doing their job,” Mr Tenges said.

The funeral went on uninterrupted and leaders present allowed to give speeches, including Dr Amoth.

Ironically, this comes barely a week after a widower was forced to spend a night at Tigania Police station with his wife’s body after relatives were barred from proceeding to their home for burial.

Charles Mwenda was forced to proceed for his wife’s burial at Kianjai in Meru County alone after a night of horror in the police station.

A similar incident was witnessed in Mathira, Nyeri County where Konyu Ward MCA Eric Wamumbi was forced to cut short his tribute to his deceased wife by police. 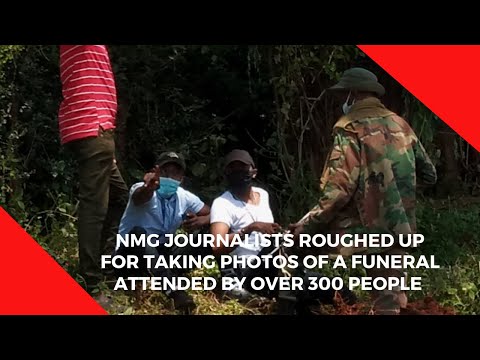 Police were deployed to ensure a limited number of mourners attended and the time for the funeral limited to 45 minutes.

“I am saddened that the police have no respect for the church and no feelings towards a family that had lost a loved one. It is very sad as to how low we have gone,” Mathira MP Rigathi Gachagua said during Mr Wamumbi’s wife’s funeral.