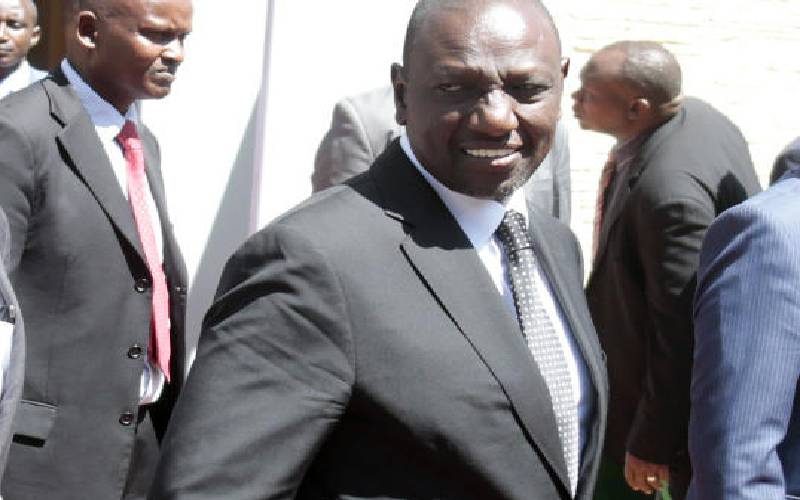 Last week’s dawn rituals involving Deputy President William Ruto (pictured)  by Talai elders continue to cause ripples in the Rift Valley, with critics terming the ceremony insignificant.
The raging debate has divided Talai elders into two factions, with one group backing the cultural rites and the other questioning the procedure.
Stephen Sugut, a Talai elder, termed the event a “fake ceremony”, saying intricate procedures of the clan’s culture were not followed.

Sugut said Talai elders were not consulted ahead of the ceremony as asserted by Talai Council of Elders’ chairperson retired Reverend Canon James Baasi.
“Among the Talai, there is a family mandated with administering blessings, and it was not consulted,” Mr Sugut said.
He said the clan’s coronation ceremonies are not presided over by pastors, but by chosen elders from Koitalel arap Samoei’s lineage, a procedure he says was not adhered to.
“I don’t oppose Ruto’s coronation but the procedures should have been followed. It should have been done during daytime as it has been our tradition,” he said.
But Baasi said the five sub-clans mandated to install and bless Kalenjin leaders consulted and agreed to bestow blessings on the DP to lead the community at the national platform.

Installing himself
He said Talai clans drawn from Kericho, Bomet, Uasin Gishu and Nandi counties have been meeting for the last three months after the death of former President Daniel arap Moi on February 4 to deliberate on who to be bestow blessings to lead the community.
“Moi was the legitimate community leader and he possessed instruments of power until his death. We waited for three months while planning to appoint his successor. Ruto is now the third Kalenjin leader after Koitalel and Moi,” he said.
The DP was crowned the community’s spokesman in 2006 in two ceremonies held in Eldama Ravine and Eldoret and organised by former Eldama Ravine MP Musa Sirma.
Sirma, who has since shifted allegiance to Kanu Chairman Gideon Moi, said he regrets organising the coronation for Ruto.

“Ruto can’t purport to be re-installing himself every time. I am shocked with the desperation with which the DP is operating,” he said.
David Chepsiror, a Nandi elder from Uasin Gishu, accused the elders who administered the oath of “commercialising community blessings”.
Chepsiror said coronations have been overtaken by events, since most people including politicians have embraced Christianity and other faiths.
“Ruto was given blessings in 2006 and that should have been enough,” he said.
But the DP’s political allies led by Soy MP Caleb Kositany told off critics, saying cultural procedures were adhered to during the event.

“Why are people talking so much about the ceremony if it was not significant? Those who know our culture understand that no other person will be crowned after the recent ceremony,” Kositany said on phone.
Kapseret MP Oscar Sudi said Ruto was summoned by the Talai elders, and he had to attend the ceremony.