This year, the record-breaker feels Spurs could lift at least one title, having acquired the services of “The Special One” Jose Mourinho.

The Ministry in collaboration with the Ministry of Sports is targeting to fully exploit the untapped sports industry; sports tourism (sports following and fame of sports personalities) to achieve their aim of reviving the economy as the world continues to grapple with the coronavirus pandemic.

Speaking to Standard Sports, 36-year-old Kipchoge had a feeling this year would be Tottenham’s year:

I understand you are a big fan of Tottenham?

Kipchoge: The Spurs. We call ourselves The Spurs, big rivals of Arsenal. I don’t think they will still be our rivals because we are doing good now.

Spurs are doing well under Jose Mourinho. They have an EFL Cup final against Manchester City. Do you think this is the year for the Spurs?

Kipchoge: Absolutely! We are going to win it.

You have just invited Kenenisa Bekele to Kenya, have you considered inviting Jose Mourinho to come enjoy and sample the wildlife in Kenya?

Kipchoge: I will invite Mourinho, Harry Kane and the whole Tottenham team to come and experience the beautiful scenery of our city. It’s the only National park within a city. After that we fly them to Amboseli, Diani, to see how beautiful Kenya is.

How did you become a Tottenham Hotspurs fan? Why not Manchester United or Arsenal?

Kipchoge: I think I’m the only football fan in Kenya who has stepped into their stadium. I have visited their academy three times, the stadium to times and have seen Tottenham play. Tottenham have the best stadium today.

You could be winning the league this year with Jose Mourinho. Do you think Arsenal fans should find somewhere to hide?

Kipchoge: *Chuckles* We really don’t know. I think they will hide somewhere, let them hide…we will carry our heads high as we head to winning the cup. I will travel and watch the EFL Cup final and cheer my team.

Kipchoge: Let us focus, stay where we are, let us keep our own concentration and we will win this league.

Tottenham scored six goals against Manchester United at Old Trafford earlier in the season… are you still ‘gloating’ about that?

Kipchoge: Manchester United are always good on the internet. But a reminder is we beat them 6-1 at their home.

Are you preparing to send a New Year gift to Mourinho?

Kipchoge: I will not pre-empt what I will be sending, but I will send a gift.

The tourism industry, which was targeting to generate Sh189 billion in 2020/21 Sh22 billion more than what they collected in 2019, is among th worst-hit sector by the pandemic, losing Sh80 billion between February and June 2020.

In August last year, Kipchoge’s spent a weekend at Maasai Mara to witness the Wildebeest Migration.

Kenya Tourism Board CEO Betty Radier said that the Board is actively exploring additional marketing options for the destination with sports tourism featuring prominently among the available avenues.

“We are increasingly using both local and global sporting events, as well as renowned sports personalities, to raise Kenya’s profile as a top tourism destination. By virtue of the eyeballs, both entities are able to attract, they make for favourable avenues through which a country can profile its destination and convert the same to actual tourist footfall into the country.”

She added: “By virtue of athletes such as Eliud Kipchoge participating in top sporting events, the world is able to associate him with the destination, and in turn, the country benefits by showcasing its attractions to the global audience; in turn translating to an increase in number of visitors from around the world.” 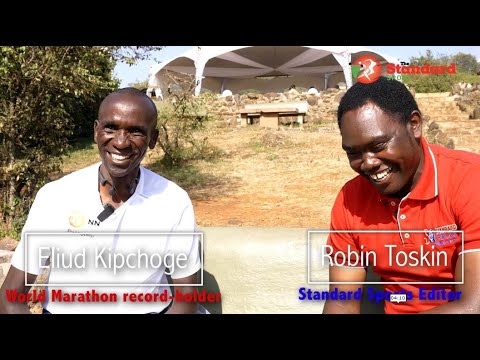