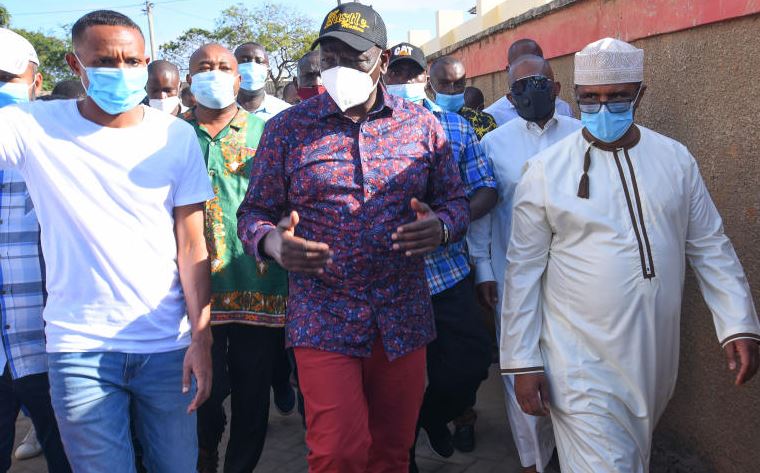 Deputy President William Ruto hinted, for the first time, that he may consider vying for the presidency on a different political outfit after admitting that Jubilee was fast slipping through his fingers.

Outfoxed in both the government and the party, and frustrated by the turn of events in the Jubilee dream but determined to go for it, Ruto (pictured centre) will likely hang on for now but bolt out at the opportune moment.

But before that, he may oppose the constitutional changes that his boss, President Uhuru Kenyatta, and ODM leader Raila Odinga are championing.

In a television interview on Thursday night, Ruto fell short of saying he had given up on Jubilee and President Kenyatta’s government. In the past, he always downplayed the rift at the top, describing the differences in the party as part of internal democracy and showing up at State events in unity shows.

And hours after comparing his party to Kanu of the ‘1990s that could not condone dissent and saying he was yet to be persuaded that the Constitution required to be amended, Ruto hit the road once again after months of political hiatus, touring Mombasa.

In Mombasa, he expressed his confidence in youth supporting his presidential bid.

“I have confidence in the youths and believe we shall be together till the end of this journey,” said Ruto while issuing free National Hospital Insurance Fund (NHIF) cards to 500 elderly people in Nyali Constituency.

His Coast team, led by former Mombasa Senator Hassan Omar, said they will give their all to ‘Project Ruto’.

“It is time that we take Ruto and put him at the helm where we can achieve the same goals as a nation,” said Omar.

Back to the TV interview, Ruto blamed “brokers, charlatans and con men” for wedging an ever widening rift in Jubilee Party, naming party Vice Chairman David Murathe as the leader of the group.

“Unfortunately they have hijacked and are now running the party in fiat. Their words have become the party position. Admittedly there is a problem in the party, and it is mind boggling that we have not had any serious party meeting to discuss what should happen and all that,” he said.

He said the group had no clue what the party stood for as they had only been appointed on caretaker basis.
Come what may, Ruto said, he will be on the ballot in 2022, even if the party he founded does not hand him the ticket.

“Some are saying we will not field a candidate. We will bring back the party in which every community will belong,” he said.

Before that, Ruto said, he will try to make sense of what is left of Jubilee. This is because he stands to lose the most as a founder member of the party if it disintegrates. He said he worked flat out to assemble the Jubilee edifice, convincing parties to fold.

“I believe there is still a chance to salvage Jubilee. We have invested a lot in the party. Hopefully, we will cross that river when we get there. If it will become hopeless and the Jubilee is completely hijacked by these brokers, then ‘kuvunjika kwa mwiko sio mwisho wa kupika, kupika ni lazima.”

In a quick rejoinder, Murathe yesterday said Ruto should just leave the party and stop threatening them about his exit.

“What is he waiting for? Let him take a walk. We are not bothered, after all he is the one that started derailing the president with his incessant 2022 election politics, he should take a walk,” said Murathe.

He said there was no way Ruto can win back their trust.

“Had he been patient, President Kenyatta would have led his campaigns in 2022. Now his restlessness has spoiled for him. We started seeing him from afar and noted that he did not have an iota of patience,” said Murathe.

In his regrets, Ruto said he had been running a huge party, URP, with 75 MPs when he folded it to form Jubilee.

“The mistake Kanu made is that they found themselves with more people outside when they started kicking everyone out, it will be tragic if we lose on the ideals. The biggest loser will be President Kenyatta and me.”

From his line of argument, Ruto’s first excuse to bolt out of Jubilee could be the Building Bridges Initiative (BBI).

In the interview, he said he had no clue as to what the process was all about, daring them to bring it on. He said there were better things to worry Kenyans at the moment than changing the Constitution.

“First I do not know what is to be amended. The push is being done by leaders, the people at this moment are concerned with jobs, livelihoods, food, children, coronavirus and there is no end in sight,” said the DP.

Lawyer Dunstan Omari said this was the right time for Ruto to bolt out of Jubilee and that his indication as alluded to in the interview had helped separate him from Uhuru.

“If he leaves now, he will have run away from the baggage of the Government, leaving Uhuru and Raila with the stench,” said Omari.

Political analyst Mutahi Ngunyi, however, said whatever moves Ruto makes, his presidency would only be a reality with the Gema support.

“Unfortunately the Gema nation don’t vote for individuals but for their interest and those following him now will ditch him at some time. He better looks elsewhere, but again without the Gema votes he will still get no far,” said Prof Ngunyi.

Yesterday, Raila’s ODM accused Ruto of dragging it into the internal affairs of Jubilee and want him to stop.
ODM Secretary General Edwin Sifuna called on Ruto to stop using the party to fight proxy wars in Jubilee.

Karua, Gachagua to get additional security after running mate nominations