Having recently moved on top prospects such as Erling Haaland (Borussia Dortmund), Dayot Upamecano (Bayern Munich), Dominik Szoboszlai, Naby Keita and Amadou Haidara (all RB Leipzig) to the Bundesliga, as well as Patson Daka (Leicester) and Sadio Mane (Southampton) to the Premier League, FC Salzburg’s turnover of talent seems to be endless.

The Austrian club, who have a partnership under the Red Bull umbrella with German side Leipzig, have made over €430 million from these exits since 2014-15, according to Transfermarkt. And when you consider that Noah Okafor’s €11.2m move from FC Basel in 2020 is their record incoming transfer, you can see how well the club is run.

Salzburg are set to face German giants Bayern on Tuesday in the second leg of their Champions League round-of-16 tie (tied at 1-1 on aggregate) and are attracting plenty of plaudits for their ability to develop such talented young players. Of the current squad, Karim Adeyemi (20), Oumar Solet (22), Chukwubuike Adamu (20), Mohamed Camara (22) and the injured Sekou Koita (22) have already made their mark, but who are the next in line to emerge from one of the most notorious talent-producing clubs in European football? 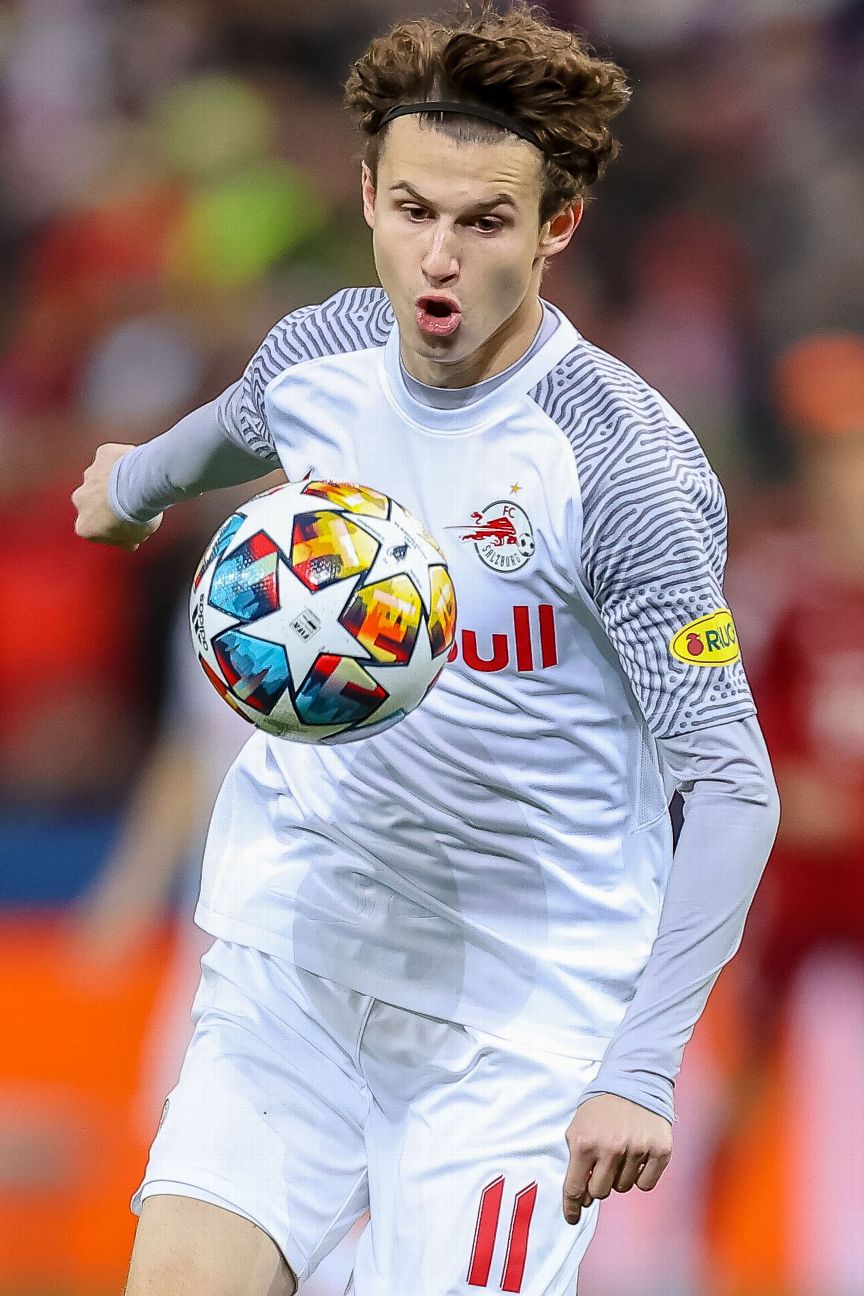 The ex-Philadelphia Union midfielder is going from strength to strength a year into his European adventure. At just 21, Aaronson is already one of the club’s top performers and was particularly impressive in the 1-1 first-leg draw against Bayern. Already a fan-favourite thanks to his enthusiastic nature, the United States international combines excellent technique with smart movement, often timing his late runs into the box to perfection in a Frank Lampard-esque fashion.

His last-minute goal against Rapid Vienna in September 2021 summed up Aaronson well: from defending a corner, he set off on a pitch-length sprint to slot home Okafor’s counterattack, which turned out to be the last kick of an energy-sapping derby. There’s little wonder that Premier League (notably Leeds United) and Bundesliga clubs have singled out the intelligent midfielder as a summer target. 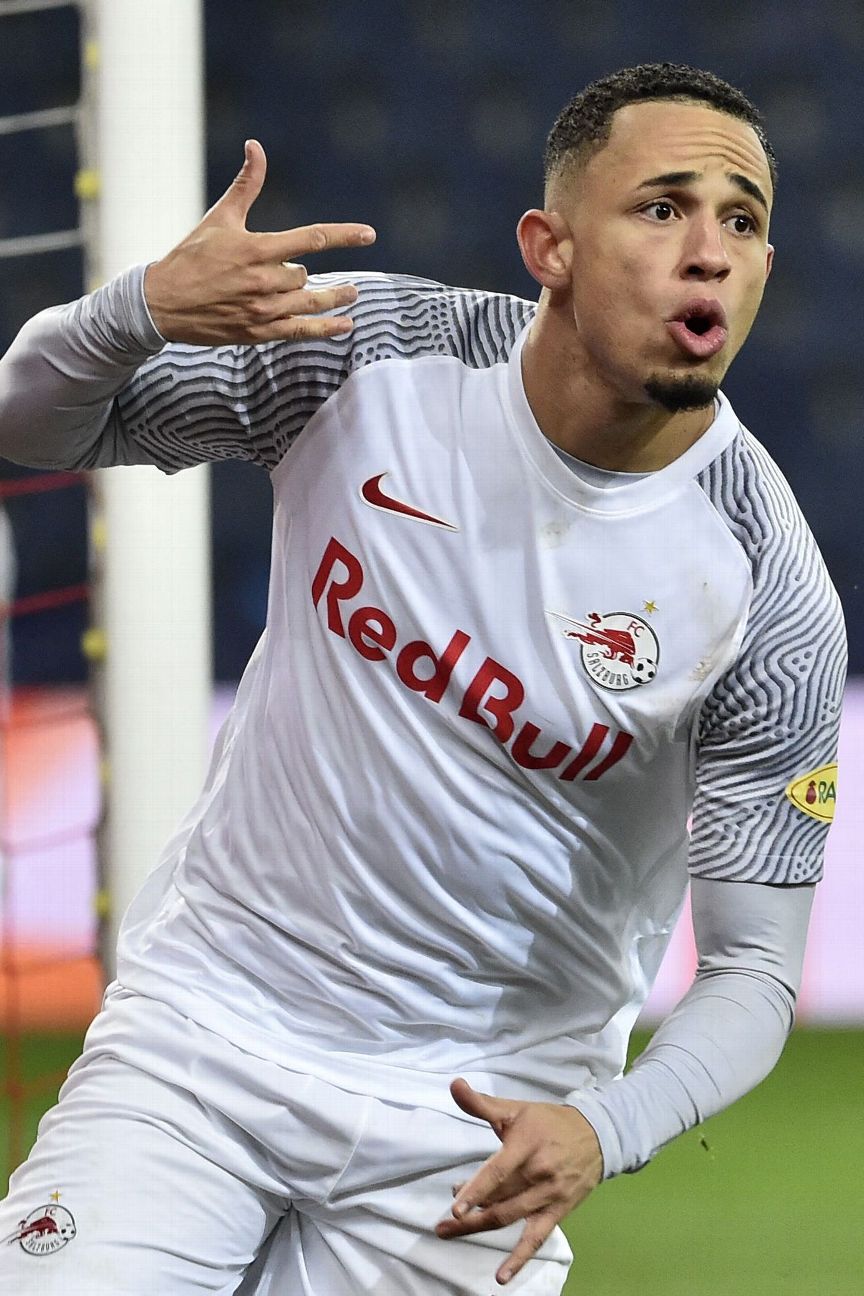 Regrettably the Switzerland international, who usually plays as a left winger or as central striker, is still out with the hamstring injury he picked up in the first fixture against Bayern. The Austrian side will miss his impact and, based on his performances over the past months, there are clear signs that the club’s record signing is developing into a more reliable presence.

Initially renowned for his breathtaking pace, directness and accelerations — especially when space opens up toward the latter stages of games — he has also added a sense of opportunism, as evidenced by his two clinical close-range finishes in the 3-1 win against Wolfsburg recently. While Okafor has occasionally been let down by his first touch and ability to spot the right pass when receiving the ball, he does look a more mature player and has bettered his decision-making this campaign. 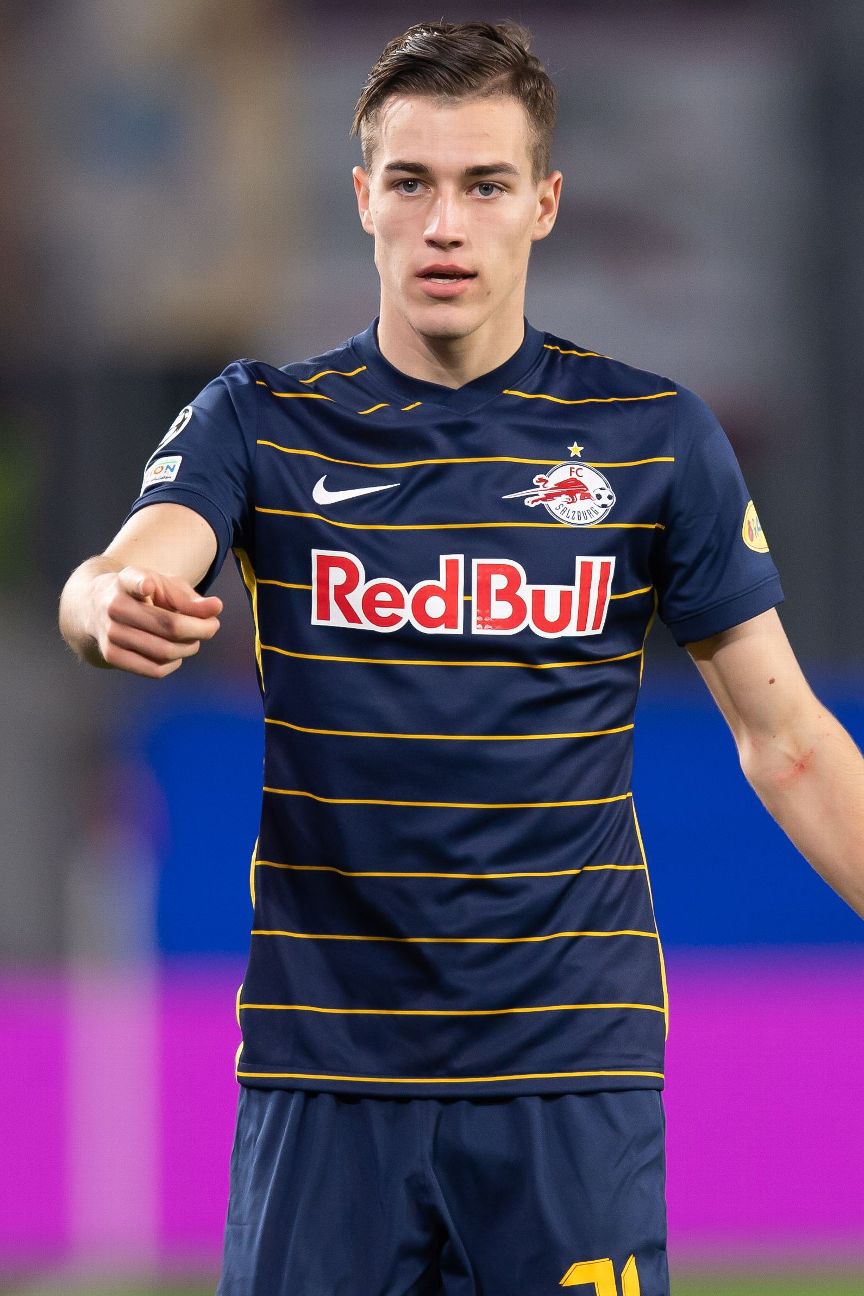 Already a full Croatia international, Susic can look back on a year of progression, with appearances coming primarily off the bench, which suggests his breakthrough could be right around the corner. Though a multifunctional midfielder who’s able to play in all roles in the midfield diamond, the 6-foot-1, technically gifted 19-year-old has mainly featured on the right in a narrow wide role which is part winger and part No. 8.

His progressive movement, dribbling and varied-but-precise range of passing might see Susic settle in a more central role, or even as a deep-lying playmaker (like his idol Luka Modric), but as yet he’s more recognised for his attacking qualities. With a fine left foot, Susic is able to drift infield to assume playmaking responsibilities or even test the goalkeeper from long range. The tactically astute teenager is also excellent without the ball and takes up clever positions to aid his teammates. 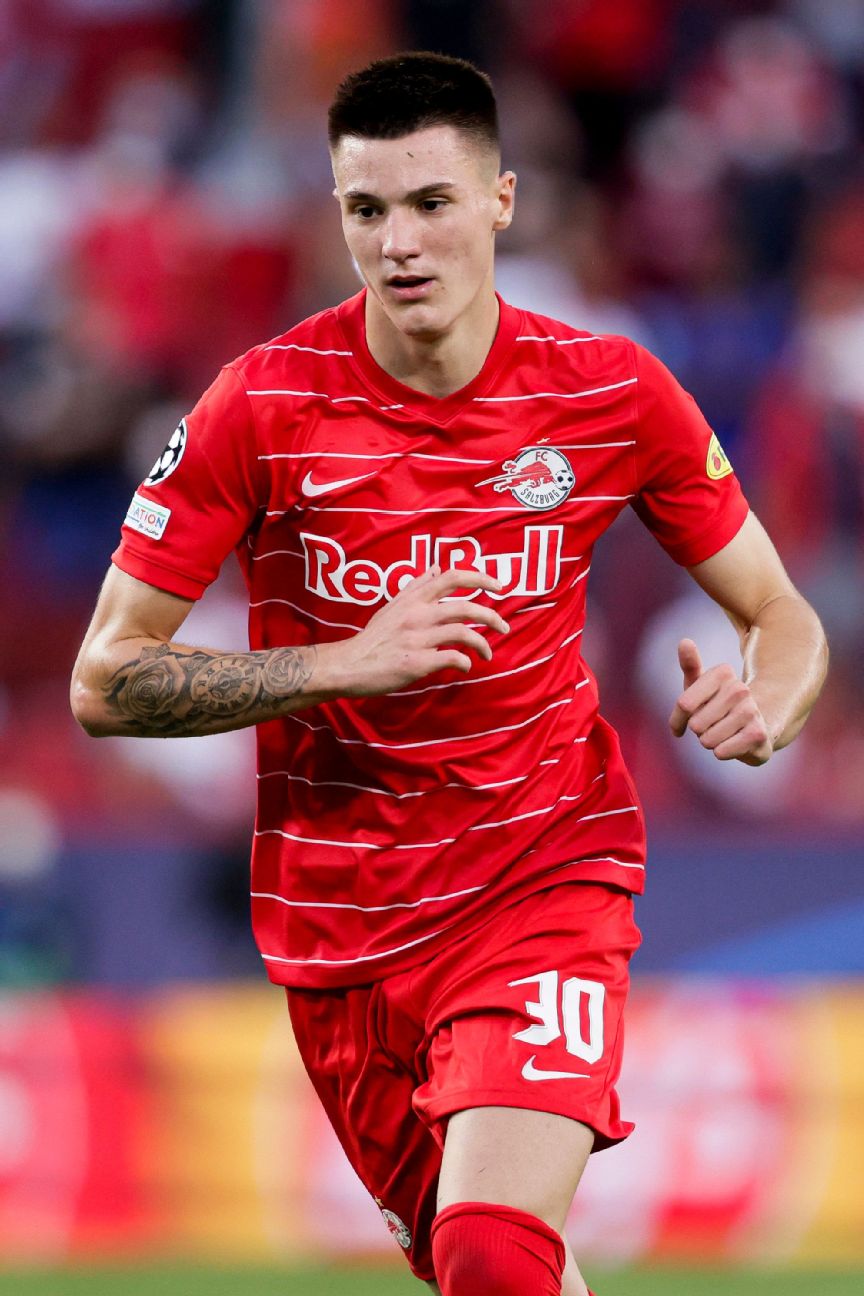 Rather inevitably, the 6-foot-4 Slovenia international striker attracted immediate comparisons to Haaland as he went on a scoring spree for Salzburg’s second team, FC Liefering, with 22 goals in 44 games in the Austrian second tier last season. But while Sesko is of a similar build to Haaland, he’s right-footed and doesn’t have the uncompromising single-mindedness (at least not yet), nor the extreme penetrative pace of the Norway international.

That said, Sesko does have many other skills that may see him turn into an interesting No. 9 at senior level: he’s got fine balance, is difficult to knock off the ball, can find his teammates well from knock-downs and flicks, is a developing finisher and also displays some nice footwork. 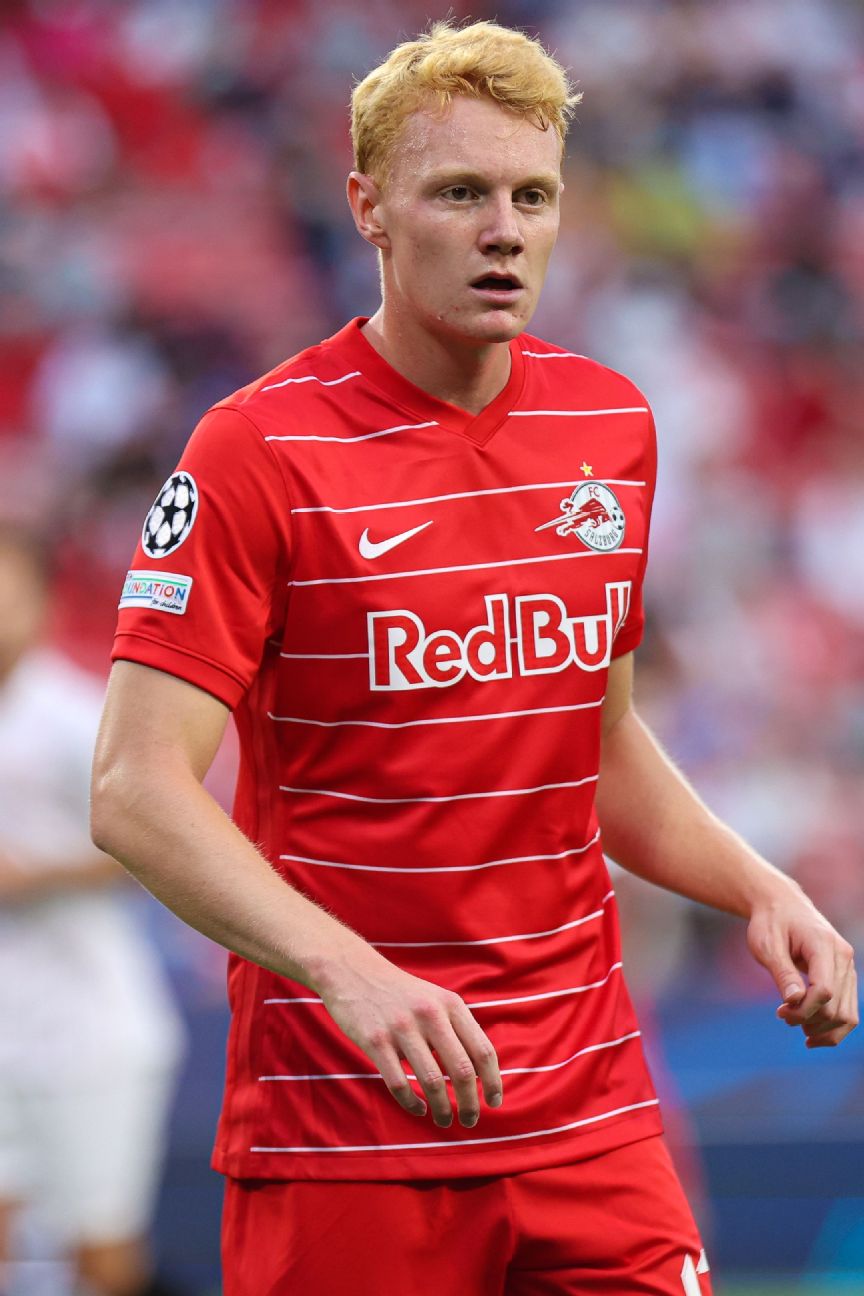 While the majority of young players grab the attention for their quality on the ball, Seiwald stands out for his exceptional work ethic, timing and off-the-ball input. Mostly deployed to the left or as a No. 6 in the midfield diamond, the Austria U21 international is among the most industrious young midfielders in top level European football.

Not only is he avid in his pressing responsibilities, but he also registers an impressive 4.4 ball recoveries and five interceptions per game this season. Add in 13 challenges and there’s little doubt that Seiwald is extremely committed and a tricky opponent to face. For all his efforts for the benefit of the team, the midfielder also progresses well with the ball at his feet — as seen against Wolfsburg in the Champions League where he found space in midfield and quickly set off with the ball before setting up Adeyemi for the opening goal.

Some other exciting FC Salzburg prospects:

Another graduate of the club’s academy in Mali, Guindo has been integrated into the first team following an excellent season with Liefering. Physically strong and with a developing understanding of the game, Guindo offers a fine balance between strong attacking skills — his left foot is as sensitive as they come — and resolute defending. The favourite to succeed 36-year-old club legend Andreas Ulmer when he retires.

Signed from Polish club Rakow in the summer for around €5m, the centre-back hasn’t featured much in the Champions League but has looked comfortable in the Austrian Bundesliga. Excellent in the air, decent on the ball and equipped with good pace, he should have a bright future.

A €5m January signing from Belgian side Club Brugge, Van der Brempt was already a full-fledged first-team player before he joined Salzburg. Powerful, determined and competitive, the Belgian is not dissimilar to Salzburg’s first-choice right-back, Rasmus Kristensen.

A left-footed attacking midfielder who is easily recognised with his long, powerful gait. Though predominantly renowned for his passing and playmaking abilities, Kjaergaard doesn’t mind mixing it in midfield with a tough tackle, intense pressing or an aerial duel. The Denmark U21 international could potentially replace Aaronson long-term if he departs.

The highly rated Croatia U21 centre-forward signed for €4m from NK Lokomotiva Zagreb last summer and may see more first-team minutes in the future. Simic, who came on for five minutes against Wolfsburg in the Champions League, boasts some of the same attributes as Sesko: he’s a classic No. 9 with excellent work-rate, strong in the air and solid finishing skills. He has primarily played for Liefering this season where he has hit 11 goals in 15 games.