Skip to content
Gossip
Residents and motorists in Githurai 44 are calling on the authorities to come to their aid to have the crucial ‘Uncle Sam’ road repaired as it is in a deplorable state.

The frustrated residents, traders and motorists are lamenting that the road that links Githurai 44 and 45 has been neglected for the last two years causing them anguish.

They say their appeals for the authorities to repair it have fallen on deaf ears, with motorists and motorcyclists being forced to use it careful while also endangering lives of pedestrians.

“So many people have been run over by drivers and boda boda operators. Young children have been hit by boda boda guys who speed off leaving them in critical condition. Some are left to live their lives in wheelchairs and crutches,” said Kevin Githinji, a resident.

“You can’t walk down the street without boda boda riders almost hitting you,” he added.

The motorists lament that they are forced to deal with expensive and constant car repairs due to damage caused on their vehicles using the dilapidated ‘Uncle Sam’ road each day.

“That road has been causing drivers headaches for more than two years now. It is the only route that we use to get passengers to and from Githurai 45. The huge pothole near Delta boutique has caused many cars to break down leading to jams, which may last up to half an hour,” said Kamau, a Tikagi Sacco matatu driver.

He added that their cries have been ignored as they continue to suffer.

“Cars sometimes fall into ditches when they try to avoid the potholes which damages the bumpers and shocks of the vehicle. We have been complaining but we’ve never gotten any feedback,” he added.

Business owners plying their trade in the area lamented that the poor state of the road has also denied them customers forcing some to shut down and relocate to better served areas.

“First of all, the road is very dusty and whenever it rains the potholes fill up with water making it hard for both pedestrians and motorists to use. The cars splash dirty water on my produce and the customers buying vegetables at times,” said Naomi Mueni, a greengrocer.

Mueni added, “This road has forced some business persons to shift to other areas. When I first came to ‘44’ about 15 years ago, the place was developing and the roads were good. The route gradually worsened to what it is today.”

They are calling for the repair of the crucial road to also safeguard their businesses.

“Business was booming back then and the area attracted a lot of traders. As we speak some are shifting to other places because the potholes make it hard for customers to use the route,” added Ephraim Asega, a hardware shop owner on the road. 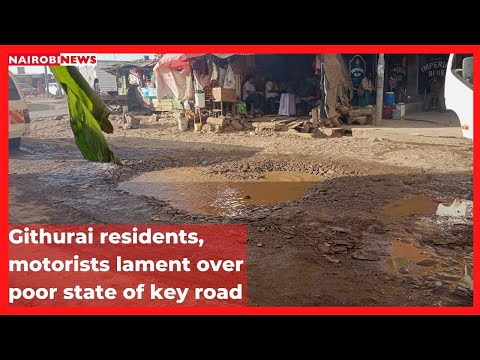