They’re beneficial for everyone, regardless of their age, values or technological “fluency.” 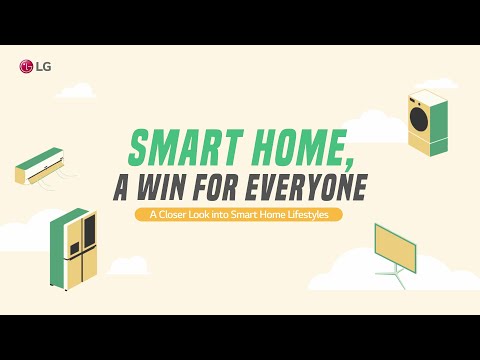 The concept of a smart home may be traditionally considered the dominion of the youth, but new research reveals that smart technologies are actually narrowing the digital divide between generations at home.

According to a Smart Home Report by LG ThinQ®, smart technology is transforming Americans’ lifestyle habits and routines across generations — with findings revealing that smart homes are considered beneficial by everyone, regardless of their age, values or technological “fluency.”

But just how is this technology disrupting and strengthening the foundations of the traditional American home? In partnership with technology leader, LG Electronics, we took a look at how the future of at-home living is looking more intelligent every day.

NO AI DEGREE? NO PROBLEM.

If the concept of artificial intelligence leaves you scratching your head, the good news is this: Research suggests that even those with very little knowledge of AI can enjoy the benefits of smart home appliances.

In fact, the Smart Home Report — that surveyed 837 US consumers — revealed that users who were less tech-savvy reported feeling even more satisfied with their intelligent appliances, when compared to those users who identified as having a high level of AI knowledge. Some of the key benefits included the ability to control devices automatically, such as your TV and refrigerator; saving money and energy via intuitive, eco-minded tech; and personalization of appliances, which allow users to adapt their home automation to their needs.

The research signals positive news for older Americans who may feel intimidated introducing AI tech at home — as it suggests that anyone can experience the seemingly endless benefits of a smart home.

Americans aged 50+ reported the highest rates of satisfaction with their smart home ― with 60% of respondents expressing they were “very satisfied” with their smart appliances, compared to 27% of 25-29 year olds.

When it came to which lifestyle groups reported the highest satisfaction with their smart home, the group that valued “high social status” was the most impressed ― with findings revealing that the smart home is incredibly useful for socially-driven people who love to show off and celebrate new tech with their friends.

What attracted people to their smart home technology also varied by generation ― with those in their twenties drawn foremost to new and advanced technology, whereas those aged over 45 considered it more important to evaluate how smart tech improved overall performance.

According to smart home users, out of all the incredible benefits afforded by AI technology, the rise of the “eco-house” was top of the list. Using routine features, smart home users of all ages can minimize energy consumption — optimizing the functions of their appliances to operate in an energy-saving manner, which is valuable for both the user and Mother Nature.

As well as creating a more sustainable way of living at home, users also enjoyed the money-saving benefits of energy-efficient appliances — proving that the smart home can become an important auxiliary means of living a wallet-friendly, eco-conscious life.

The LG ThinQ® Smart Home Report presents a leadership vision for the smart home market. For more information, be sure to read the full report and watch the video below.