Prior to ODM leader Raila Odinga’s Azimio la Umoja convention on Friday, little might have been known about Hezena Lemaletian also known as Queen of the North.

Dressed in a blue dress complete with Maasai-inspired accessories, Hezena who is the Vijana na Raila youth leader delivered an epic speech before a crowd of over 60,000 who had gathered to witness Odinga declare his fifth attempt at the presidency.

She also had the pleasure of escorting Odinga to the podium to deliver his much-awaited speech where he declared his 2022 presidential bid.

While lauding the ODM leader, the Vijana na Raila Secretary-General left the crowd excited and craving for more after her short speech.

“Your excellency, the enigma, Baba, the greatest and the most respected man in the North of the Sahara and South of the Limpopo, former Prime Minister and the fifth General, Raila Odinga and her excellency Mama Ida Odinga, all protocols observed, habari zenu?” she began her address.

Hezena went on to announce that she is looking to vie for Samburu’s Woman Representative sit in the 2022 General Elections.

She urged the youth to rally behind Mr. Odinga saying he had made a selfless struggle for a better Kenya. 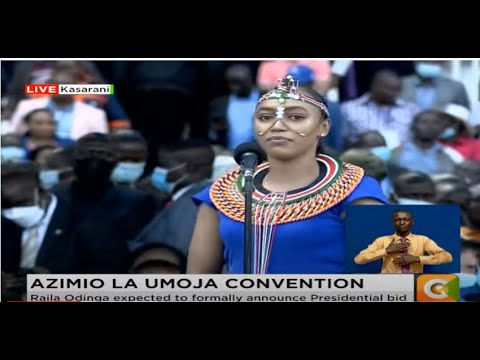