NEW ORLEANS — It’s Dec. 5 and the New Orleans Pelicans, losers of six straight games, are hosting the Phoenix Suns. Early in the first quarter Kelly Oubre Jr., streaking down the court on a fast break, gathers a pass from Ricky Rubio, takes one dribble, and rises toward the rim.

Pelicans forward Brandon Ingram doesn’t appear to have a path to stop Oubre from slamming it home, but he leaps from outside the restricted line to try and block the dunk. He’s unsuccessful.

Oubre draws Ingram’s second foul just 3:20 into the game. Ingram heads to the bench for the remainder of the quarter. Josh Hart, his teammate in New Orleans and Los Angeles, tells Ingram he should have let Oubre go, so the Pelicans’ leading scorer could stay on the court.

But Ingram wasn’t having it. He wasn’t going to let Oubre get a free dunk.

“He was like, ‘Nah, as the leader I have to go set the tone so someone else will go do that,'” Hart said. “That’s the kind of leader and person he is.”

As Ingram prepares to return to his first NBA home, Los Angeles, he does so with an uncertain future. He is playing out the final year of his rookie contract before becoming a restricted free agent this summer. Ingram was eligible for a contract extension before this season, but he and the Pelicans couldn’t come to terms.

“I just had a crazy injury,” Ingram said of the deep venous thrombosis in his shoulder that ended his season in March. “They probably never seen it before. They wanted to see how I recovered. That’s the message I got. I couldn’t do anything but respect it.”

But that doesn’t mean he wasn’t paying attention to the contract extensions signed by other members of the 2016 draft class. Philadelphia 76ers point guard Ben Simmons, picked one spot ahead of Ingram, inked a max deal worth $170 million over the next five years. Jaylen Brown, who was drafted one spot after Ingram, re-upped with the Boston Celtics for four years and $115 million. Buddy Hield, the No. 6 pick in that draft, got four years and $106 million.

That competitive spirit is paying dividends for the Pelicans, who sources say intend to re-sign Ingram this summer and view him as a fundamental building block.

The Pelicans enter Friday’s showdown with the Lakers on a four-game winning streak and have won five of six to move to 3.5 games back of the eighth spot in the Western Conference.

In the past four games, Ingram put up 25.3 points, 7.3 rebounds, 4.5 assists and 2.0 steals a game while shooting 49.3 percent overall and 54.2 percent from deep. On Christmas Day, he set an NBA Christmas record with seven 3-pointers, a career-high.

He was rewarded with the NBA’s Western Conference Player of the Week award. Ingram said “it felt good” but tried to deflect the attention, complimenting his teammates.

Those same teammates recognized his contributions.

“He’s our best player,” Lonzo Ball said. “He’s been showing it all year. He finally got the award because we finally won some games for him. Hopefully we can keep going.”

Ingram has had to step up and become the Pelicans’ best player in part because of the knee injury that sidelined No. 1 overall pick Zion Williamson, who was averaging a team-high 23.3 points in the preseason. 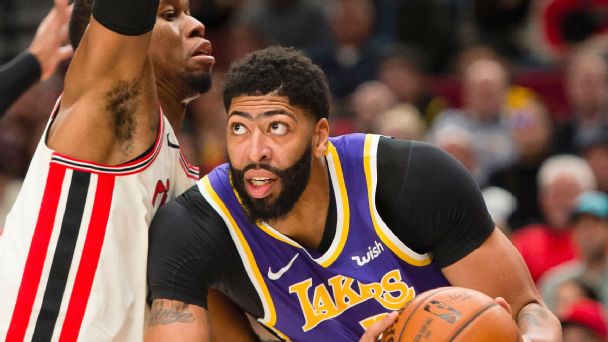 The NBA is live! Tune in here.

Williamson has yet to play this season, and in his absence, Ingram has done his best to fill the void. In just his third game in New Orleans, he scored 35 points and pulled in 15 rebounds. In his seventh game, two days after being knocked out of a game with a head injury, Ingram put up a career-high 40 against Brooklyn.

Ingram has also started to develop a role as the Pelicans’ go-to guy in the fourth quarter.

“Brandon can go get his own shot and does a good job at that,” Pelicans coach Alvin Gentry said. “He seems to hit the big shot that can kind of close out games for us.”

Still, Ingram says even after he puts up 25 or 30 points, when he looks at the film, he feels as if he could have had 40 or 42. He takes a look at drives and sometimes wishes he would have made the extra pass to a teammate on the wing to boost their confidence.

Leadership, at least the vocal kind, is not something that comes naturally to the soft-spoken Ingram. On Lakers teams that had multiple 10-year vets — including four-time MVP LeBron James a year ago — he was rarely asked to be in that position. But this year’s Pelicans team is young. There are only five players on the roster with more experience than the fourth-year forward. Only one — 11th-year guard Jrue Holiday — has played more games for the Pelicans this season.

That lack of experienced voices on the court has forced Ingram into a role he has never had, one his teammates say he’s grown into quite well.

“He gets better every year,” Ball said. “He stays in the gym. I think he’s become more of a leader. He’s talking a lot more. I’m just excited to see what he has in the future.”

Coming into the season, Ingram’s future — both in New Orleans and in the NBA — was in question. His 2018-19 season ended in early March because of the blood clots in his shoulder. Doctors assured him the issue was corrected and wouldn’t threaten his career (a similar issue resulted in Chris Bosh’s early retirement), but he remained uncertain.

“People are telling you are going to recover but you don’t actually know if you’re going to recover,” Ingram said. “There’s times when you’re at the house and you’re bored out your mind. You don’t know what to do.”

Before he was shut down, Ingram had been playing the best basketball of his career. The trade rumors that had linked him to the Pelicans were on hold until the summer, and in the six games he played after the All-Star break, Ingram averaged 27.8 points and 7.5 rebounds while shooting 57.0 percent from the field and 52.9 percent from deep.

After his season ended, Ingram trusted his doctors and physical therapists with the timeline they provided, focusing on September, when he was going to be cleared for contact. But he didn’t know where he’d be when that happened. Then, in June, those trade rumors became a reality. Anthony Davis was going to be a Laker, and Ingram, Ball and Hart were headed to New Orleans.

Ingram doesn’t remember exactly how he found out that the long-rumored trade that set his career on a new path became official. He had spoken with his agent, Jeff Schwartz, earlier in the day and was told to be on the lookout for a deal.

The first person he called was Ball. The two are locker mates inside the Smoothie King Center and shooting partners before and after practice. The next person on his call list was Hart.

That the trio was moving together allowed Ingram some level of continuity, but he was still moving to a new organization for the first time in his brief NBA career — an organization he credits with making the transition as smooth as possible.

“A big part is because it’s a different team and how welcoming the New Orleans organization has been,” Ingram said. “I think it’s a little bit easier because I’ve experienced a lot of things in this league.”

Brandon Ingram drops 34 points with five assists and six rebounds as the Pelicans defeat the Timberwolves 107-99.

Whether New Orleans will become Ingram’s long-term home remains a question for July. But for now, it’s clear he has developed a comfort level with New Orleans.

While Hart and Ball insist Ingram could fit in anywhere, they’ve noticed how much more at home he feels in New Orleans.

“In L.A. he was never really out, he wasn’t in the scene,” Hart said. “He was always at the crib chilling. If you wanted to kick with B, you just pull up to his crib and kick it. Eat some food. Play video games. That kind of thing.”

Monday through Friday, host Mina Kimes brings you an inside look at the most interesting stories at ESPN, as told by the top reporters and insiders on the planet. Listen

The change in scenery seems to have benefited the fourth-year forward, who is posting career-high numbers across the board. He leads the Pelicans in scoring (25.3 PPG) and rebounding (7.0 RPG) and is shooting 40.9% from beyond the arc.

Because of the timing of the trade and his rehab, Ingram said he hasn’t really had time to explore everything New Orleans has to offer — including the city’s famous cuisine. During the regular season, Ingram relies on a personal chef to cook for him, which has limited his opportunities to enjoy New Orleans’ dining options.

Ingram is very much a creature of habit. His daily routine on off days consists of practicing in the morning, eating at the facility, going home to take a nap and maybe slipping back out to the facility at night for some extra shots. Until the offseason, he says he’ll stick to that routine, which is working.

“Individually, yeah, I want to be the best version of me. But I want to make everyone else feel comfortable on the floor where they can go out there and they are just playing their game. That’s when I’m the happiest, when every guy on the floor is just being that.”