I never went to prom. Wanna know what I did on prom night instead? My father gave my cousin $50 so she could take me to Red Lobster. While my classmates were dancing the night away and making memories, I was chowing down on Cheddar Bay biscuits and the admiral’s feast.

Prom wasn’t the only teen experience I missed out on. I also never went to school dances and didn’t go on my first date until I was 18.

Between money being super tight and being an introverted child, I never experienced the typical moments most of the other kids around me had. One experience in particular that I missed was summer camp. My summers were spent with a slightly older cousin babysitting me until I was old enough to stay at home by myself while my mom worked.

I always wanted to at least give summer camp a shot. In addition to it no being an option because of money, I also wonder if my parents knew their introverted, only child would have a tough time. But that’s the exact reason I wish I would have gone. Not just for the sake of going to camp, but for the opportunity to push myself out of my comfort zone instead of being allowed to stay in my isolated bubble.

Between money being super tight and being an introverted child, I never experienced the typical moments most of the other kids around me had.

Last year I started noticing adult summer camps popping up and I was intrigued. Intrigued enough that I finally bit the bullet and decided it was time to go myself.

I brought my extroverted friend Karleen along and we hopped on the bus from Manhattan bound for Club Getaway in Kent, Connecticut, for the weekend.

While heading there, I was automatically transported back to one of my childhood memories I hated. The bus. It’s a simple motorized vehicle, but childhood Patrice associated it with “Where-do-I-sit? Will-anyone-sit-with-me?” anxiety. I would typically sit in the front of the bus next to one of the teachers, but this time I grabbed a seat in the middle of the bus and waited for Karleen to show up. It was a pretty chill 90-minute drive with a bunch of other 20 and 30 somethings ready for camp.

Since childhood I’ve had a habit of always scoping out any space I’m in to see if there’s anyone else who’s alone. Because maybe that person can be my buddy or at least provide some quick exchange convos to make the time go by faster. But on the bus, it looked like everyone was a part of a group ― including folks comprising a bachelorette party.

Karleen was certainly the buffer for me; otherwise, I would have sat on the bus in silence or just pretended to be asleep. We chatted with a few other campers, about half of whom were return visitors. As expected, everyone was friendly enough but also as expected, they tended to interact with the group they came with. Though Karleen was my wing woman, I immediately started to feel a bit of anxiety and that I would need her as my social crutch.

The first night consisted of a welcome dinner followed by a bit of dancing. One thing about adult summer camp that was immediately, undeniably different from kiddie camp was the alcohol. While wine came with dinner, I also purchased the Cheers package ― which meant unlimited drinks throughout the weekend.

At summer camp, I had a chance to do all of the things I missed out on as a child in a single weekend.

The next full day would really challenge me in ways that brought all of my childhood fears and hangups to the surface.

First thing in the morning Karleen and I decided to try the ropes course and ziplining. As an adult I’ve had amazing opportunities to travel and experience adventure, but that didn’t happen until I was in my late 20s, so I’d always be around colleagues who talked about hiking, backpacking, kayaking and all those fun things that I never did as a kid or young adult. But here at summer camp, I had a chance to do all of those things in a single weekend.

During lunch, a counselor announced it was almost time for color wars. Umm, color wars? Telling a black woman who’s surrounded by a sea of non-black people that “color wars” is starting had me immediately confused. I quickly Googled what was going on and apparently it was some game with teams being divided up by color ― something I never learned as a child.

My friend happily joined the white team, but my introvert meter was running low. I took a break to head to the manmade lake, grabbed a beer and relaxed in the sun. Had I experienced color wars or any forced activity as a kid, I’m sure it would have been unpleasant. I would have felt compelled to participate by a counselor who was urging me to be more outgoing, and I would have hated every moment of it. But as an adult, I was fully aware of what my limitations were. Adult me is totally fine with tapping out when I feel like it.

And besides, I had a dance to prepare for. Every Saturday, the camp has a theme dance and this one was 007. I kept it pretty simple with a slinky black dress with a low cut neckline but it was the process of getting dressed that had flashbacks of what I assumed high school dances were like. Asking your friend what she’s wearing (so you’re not over or underdressed), talking about the guy who’s eying you and getting the once over from your girl who absolutely approves of your look or gives you the suggestion to go with another shoe option. 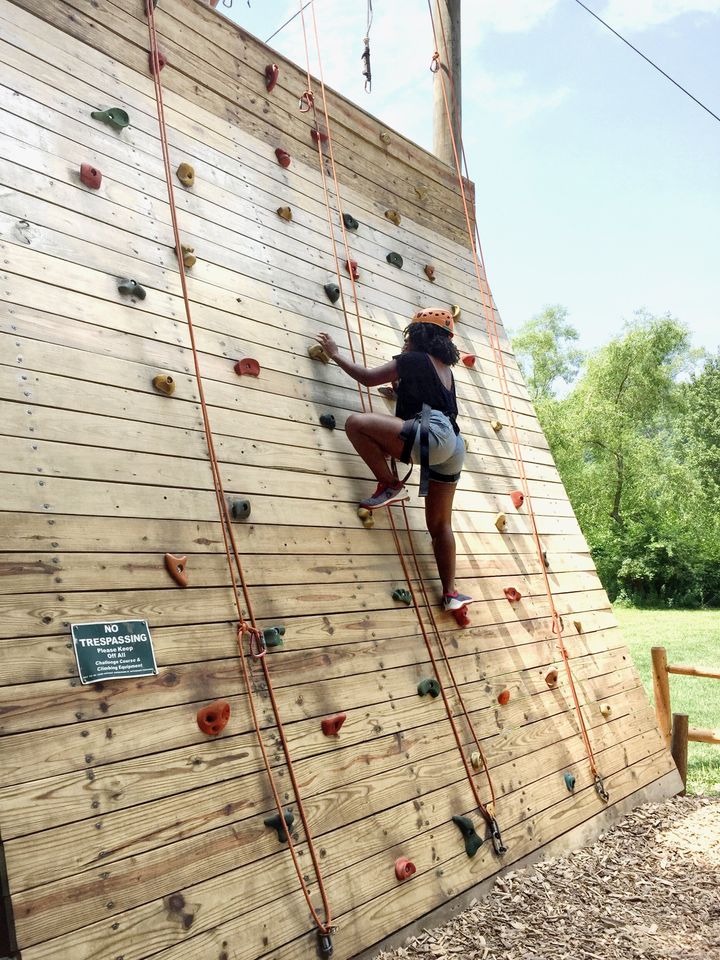 On our final morning I tried a trapeze activity that seemed too cool to pass up. I didn’t participate in any physical activities as a kid because I had two left feet and was hyperaware of being laughed at. But hey, what was the big deal this time around?

I climbed up the ladder and while I thought my upper body strength would easily swing me from one bar to the next, I flopped. Badly. I fell face first on the massive airbag. There was no denying it was funny but I was saved from being flat out embarrassed by two nearby women who offered encouragement and a, “Girl, we fell just like you did.”

I’m sure if this was 20 years before, there would have been laughs and all kinds of embarrassment. But as an adult, especially one who lives in New York, I’ve come to realize most people are so wrapped up in their own world and issues that they’re hardly paying you enough attention to laugh.

Later that afternoon we loaded into the bus and it was time to head back to life. I texted a few friends back home about how I loved adult summer camp, but I couldn’t help thinking it would have been uncomfortable for young or teenage me.

I do wish my parents would have at least enrolled me in a weekend sleepaway camp so I could step out of my comfort zone a bit. I think because I was such an easy child intellectually (straight As, maybe one B), my emotional health, where I was clearly stunted, wasn’t tended to. Being encouraged to stretch myself emotionally would have absolutely benefitted my development, compared to growing into a young adult who was afraid to talk to new people or try something new.

Rewinding to what I wish my parents would have done is impossible, but I was happy to have chosen my own experience that led to some slight anxiety-inducing moments but overall left me wanting to return.

There was the adventure of ziplining, color wars and rock climbing, but more than anything, I found my groove of going at my own pace to embrace what felt right, breathing through difficulty and tapping out when it was necessary.

So now when I tell people about that time I had a blast at summer camp, I won’t be rehashing a childhood experience but one that happened to 30-year-old me.

To plan your travel itinerary to any place in the globe please visit http://bit.ly/2ZM1DVg