Emuhaya Member of Parliament Omboko Milemba is the most performing legislator in the National Assembly for the 2019/2020 period, Infotrak study has revealed.

According to the research study, titled “Countytrak Elected Leaders Popularity Index”, Milemba, who doubles up as the chairperson of Kenya Union of Post Primary Education Teachers (KUPPET) leads his colleagues with a score of 75.4 per cent.

Trailing him are his counterparts Johana Ng’eno (Emurura Dikirr) and Vincent Musau (Mwala) who come second and third respectively, with scores of 71.4 per cent and 70.8 per cent. Khwisero MP Christopher Wang’aya comes fourth with a score of 70.0 per cent closing the bracket of top four performers.

According to Infotrak Founder and CEO Angela Ambitho, the study involved sampling responses from constituents who gauged the performance of their area leaders on their legislative duties and utilization of CDF funds.

“For some, this could be their legislative prowess and eloquence in parliamentary debates, for others, it could be the proper handling of public finances such as CDF, for others development projects while for others it could be the personal touch and interpersonal skills and charisma with which the politicians handle their electorate.

In the end, it is the kind of synthesis that the respondents in this study used to gauge the performance of their elected leaders that the electorate will use in determining who to elect in the next general election,” Ambitho states in the preliminary of the study.

The respondents, who were drawn from all the 290 constituencies in the country were asked to gauge the performance of the leaders on a scale of 1 to 10, where 1 signifies poor performance while 10 implies excellent delivery.

Some of the notable names appearing on the top 20 list include Benjamin Washiali (Mumias East) who comes at position nine with 67.3 per cent, Opiyo Wandayi (Ugunja) at number 11 with 66.6 per cent and Didmus Barasa (Kimilili) with a score of 66.5 per cent. Kibra’s Imran Okoth, recently elected after his brother’s death (Ken Okoth) made it to position 17 with a score of 64.7 per cent. Imran has tied with Hilary Kosgei of Kipkelion West who also garnered 64.7 per cent score.

Interestingly, former Msambweni MP the late Suleiman Dori is slotted at position 30 with a score of 61.7 per cent. According to the study, Embakasi South MP Julius Mawathe, who was voted in on Wiper Party ticket after a gruelling political battle with ODM is one of the top performers in Nairobi. Mawathe ties with his Alego Usonga counterpart Samuel Atandi at position 61 with a score of 57.1 per cent. Mr Mawathe follows 55th placed Timothy Wanyonyi (Westlands) who stood in for the late Ken Okoth in Kibra when Okoth was hospitalised.

At the tail of the list (position 290) is Isiolo South MP Abdi Tepo with a score of 33 per cent. Mr Tepo follows Clement Kigano (Kangema) and Francis Kimani (Molo) who come at positions 289 and 288 with scores of 36.3 per cent and 37 per cent respectively.

According to the study, sample sizes varied in relation to the population sizes of the counties.

“A county like Nairobi with 85 wards was allocated a larger quota sample of 2500 while smaller counties like Vihiga and Lamu were allocated quota samples of 600 respectively,” it states.

The study was conducted on November and December 2019 through to January 2020.

Below is part of the list released by Infotrak. 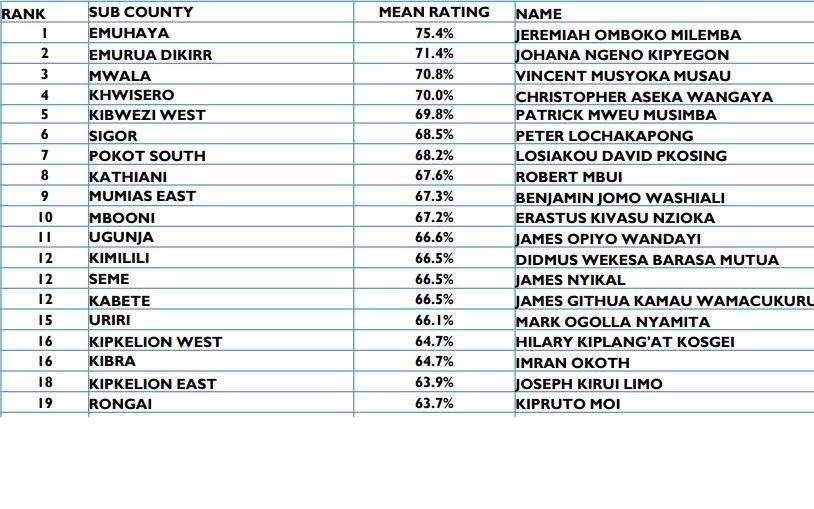 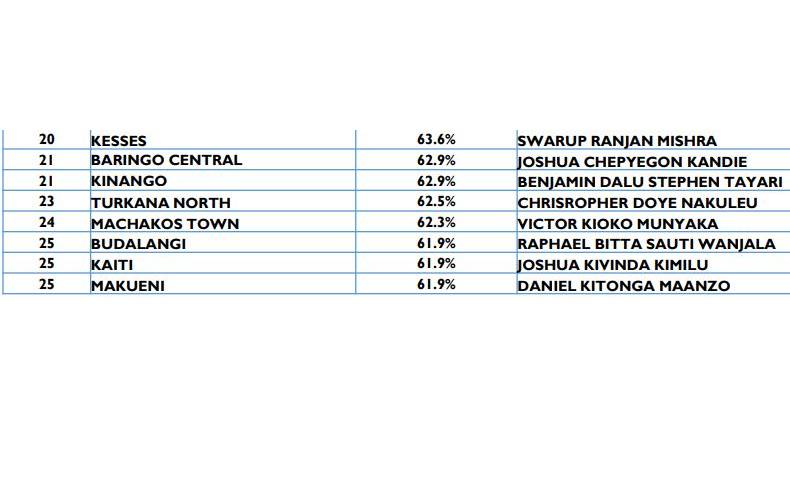 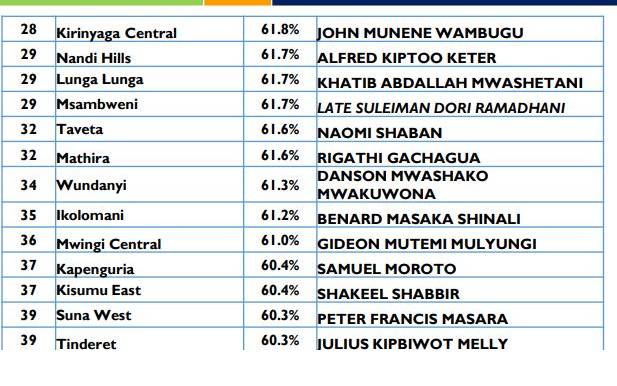 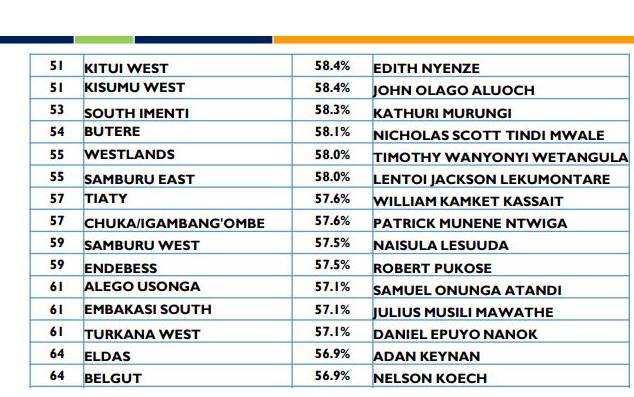 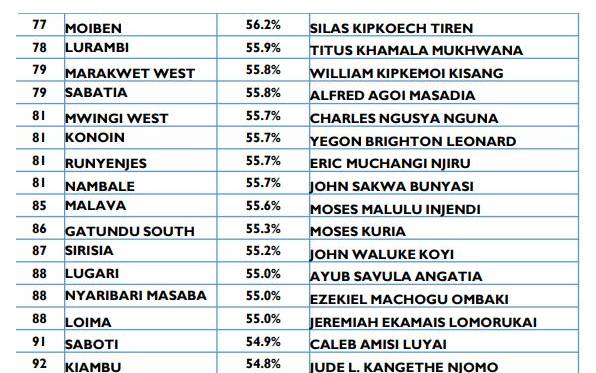 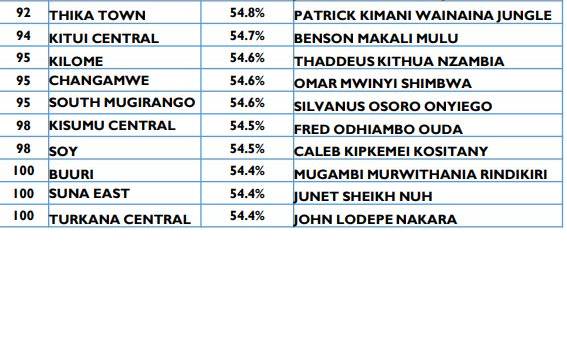 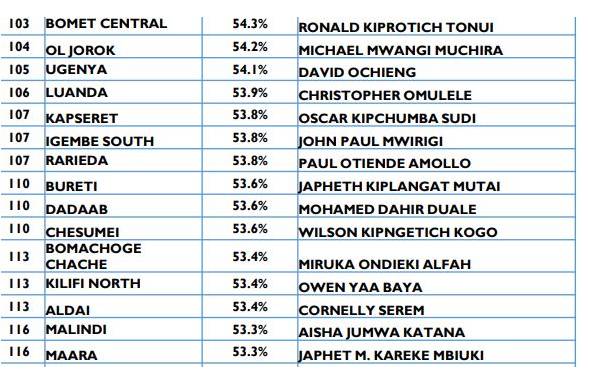 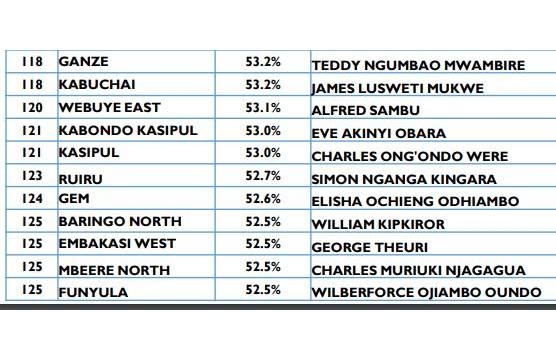 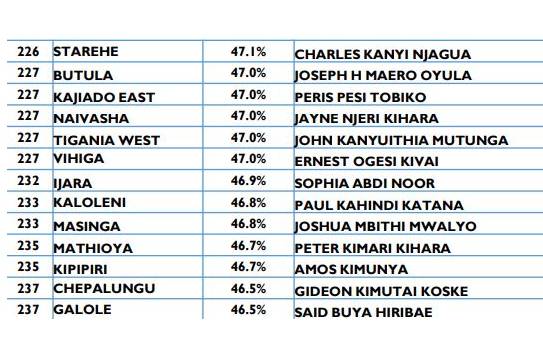 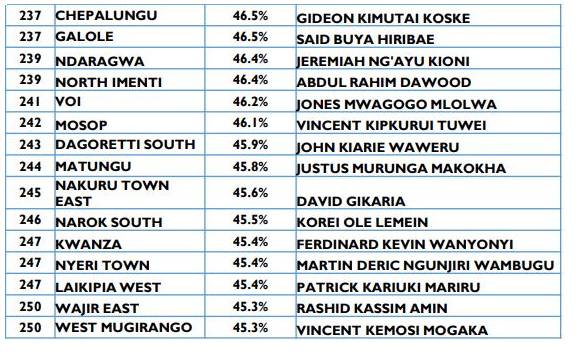