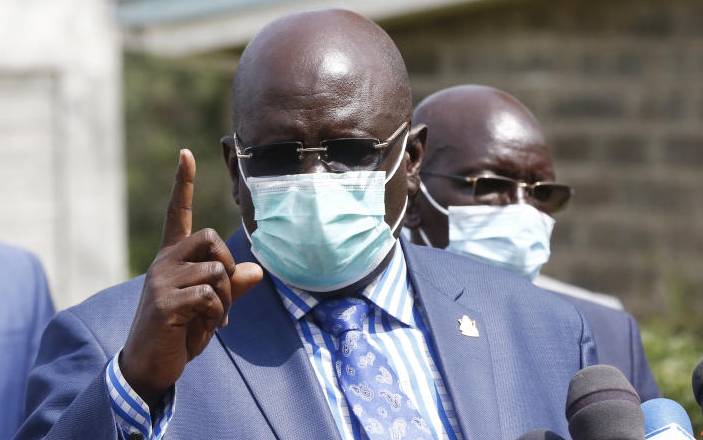 Students may attend school in shifts should learning resume in September.

It has emerged that to comply with social distancing guidelines set out by the Ministry of Health, Education officials are mulling adopting staggered learning.

In primary and secondary schools, the emphasis will be on Class Eight and Form Four candidates.

The transition of Grade Four pupils under the Competency-Based Curriculum is also critical as the government is expected to implement a national roll-out of the new system to Grade Five next year.

The Standard established that Prof Magoha is studying a number of scenarios presented to him in case learning institutions open in the next three months as directed by President Uhuru Kenyatta.

The proposals were made by the Covid-19 Education Response Committee set up by the CS to advise him on the reopening of all basic learning institutions, teacher training colleges and adult education institutions.

Magoha, however, said the decisions regarding reopening of learning institutions may change as informed by prevailing circumstances and increased knowledge of the Covid-19 pandemic.

One of the options on the table is for a section of learners to attend school during the morning session with the rest of the students allowed to report in the afternoon.

Another scenario being considered is where some of the students would attend school for one uninterrupted week or month, with the rest of learners scheduled to report the following week/month.

There is also the option of various classes spread across two or three days of the week.

Under this arrangement, the first group of learners (candidates and Fourth Graders) would attend school from Monday to Wednesday, with the second lot reporting on Thursday and Friday.

The following week, the cohort that attended school for two days the previous week would study for three days, as the other group learns for the remaining two days.

This would be repeated during the entire school term.

Sources familiar with the planning details said this would be an ideal learning system because it would allow candidate classes to be taught and prepare for examinations without putting the other classes at a disadvantage.

Another proposal that required half the learners to stay home for an entire term as the rest attended school was rejected.

Insiders said this proposal was not popular as reports emerged that children had already stayed home for too long, and extending their confinement may be counter-productive.

“We wish to assure all stakeholders that the government is doing all that is within its means to ensure that the right decisions are made regarding the reopening of schools while taking into account the Covid-19 situation as advised by the Ministry of Health,” said Magoha.

The CS revealed that after consultations with stakeholders, the ministry was considering a number of measures for implementation.

“This includes reducing contact in learning institutions by having fewer learners at the same time. This will have a greater impact in reducing Covid-19 cases and fatalities associated with reopening of institutions,” said Magoha.

He said when schools open, teachers will be expected to implement social distancing rules, handwashing with soap, use of hand sanitisers, wearing of masks or face shields, and monitoring temperatures to reduce the risk of infection.

Teachers who spoke yesterday said some of the scenarios will require additional tutors to cater for the expanded class sizes.

“It would be prudent to boost the number of staff such that when shifts change, the teachers who were on duty also take offs,” said a secondary school teacher.

The Kenya National Union of Teachers has proposed that up to 400,000 teachers be hired to cater for the additional classes needed to effect the social distancing rule.

Most of the classes will be split into two or three streams hence stretching the current 340,000 teachers.

Even with the shift system, it emerged that the biggest headache was how to accommodate boarding schools in the programme.

The committee is said to have proposed that tents be procured and used in schools as temporary classrooms, and even as boarding facilities.

Magoha said Sh2.1 billion has been set aside for the construction of additional classrooms in secondary schools.

Education
The Education ministry still does not have a clear picture of how reopening of schools and colleges will look like.