Details of the intrigues that played at the Senate ahead of vote to impeach former Nairobi governor Mike Sonko have emerged. And now top Jubilee strategists are plotting a “handshake duo” ticket in an upcoming by-election.

In the plan revealed to The Standard by top officials, Jubilee will produce the governorship candidate while ODM gives a running mate.

The latest scheme by the handshake partners is likely to open a fresh battlefront pitting Uhuru and Raila on one side against Deputy President William Ruto on the other after Bishop Margaret Wanjiru declared herself the “hustler nation candidate” in the mini-polls.

Dr Ruto allies in the Senate were last week mowed by backers of Uhuru and Raila, who overwhelmingly voted to kick out Sonko from the plum county job.

Nairobi Governor Mike Sonko before the Senate in Nairobi on December 17, 2020 during the hearing of his impeachment motion. /Dennis Onsongo | Nation Media Group

According to the official who sought anonymity, the two political partners are planning for a similar arrangement they currently have in the Nairobi County Assembly, where the Speaker is Jubilee, and deputy speaker ODM. This came after Speaker Beatrice Elachi resigned.

“There could be a meeting as early as next week to firm up the agreement. Since the impeached governor was Jubilee, the consensus is to have Jubilee produce governor candidate and ODM deputy governor,” said the source.

Recently, former Dagoretti South MP Dennis Waweru openly sought the support of Uhuru and Raila for the position, saying it was time for the handshake team to deliver the seat.

“We have seen the clouds gathering in Nairobi. And now that I have passed the exams, nimetosha (I am capable),” said Mr Waweru in the presence of Raila when he received collected signatures at the BBI secretariat.

Yesterday, National Assembly Minority Leader Junet Mohamed said the Orange party was yet to have discussions with Jubilee over the vacant seats.

“It is still too early to have such discussions. We will have to wait for all the processes and have the Speaker sworn in to act before we can get to such kind of discussions,” said Mr Junet.

Speaker Benson Mutura is expected to be sworn in today as the acting governor for 60 days. Swearing in of Anne Mwenda, Sonko’s pick for the deputy governor, was jolted by the courts.

Mr Mutura was to be sworn in on Friday, but a judge who was set to conduct the exercise arrived late.?

The plan came as details of day-long intrigues that culminated in Sonko’s ouster last week emerged.

At the centre of it all was the President, who maintained great pressure on the Senate leadership to deliver Sonko’s head and Majority Whip Kang’ata Irungu, who engaged subtle campaign to boot the governor. 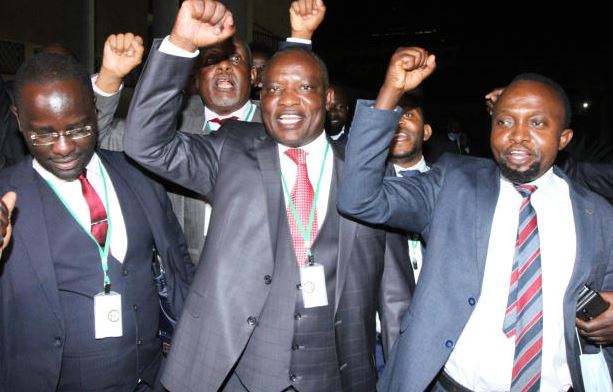 On the other hand, East Africa Legislative Assembly MP Simon Mbugua mobilised for Sonko, while Meru Senator Mithika Linturi did the DP’s bidding.

At the Senate Business Committee, Mr Kang’ata lobbied hard for a committee route in a smokescreen strategy to bait the Sonko supporters into opposing it. When that fell apart and it looked like the plenary was going to ratify the committee, Kang’ata’s team pulled the axe.

Majority Leader Samuel Phogisio was prevailed into refusing to move the Motion, and Speaker Ken Lusaka played ball, ruling that the upshot of it all was that the House would go the plenary route. This caught Tangatanga wing flatfooted.

On the D-Day itself, Sonko was to a large extent favoured by the mood of the House. The lawyers for the assembly did not help much, engaging in sideshows instead of adducing evidence or defending allegations.

As they tore into each other, lobbying was taking place in the background, with moderate senators being won over.

Kang’ata’s team also pushed and obtained virtual voting, which helped consolidate numbers to its side.

Yesterday, Kang’ata denied that unorthodox means were deployed to kick out Sonko. “Senate consists of men and women who have excelled in their respective fields and have long record of untainted service,” he said.

He declined to comment on other aspects of the impeachment, saying what mattered most was that the Senate pronounced itself boldly.

Another Senator allied to Ruto told The Standard Sonko was winning by 3pm until someone leaked to Kang’ata team of their sleeper cells. By 7pm, those “sleeper cells” had been worked on, and all that waited was for the counsel to finish their long winded arguments before Sonko was booted out.

H-Pylori: What is it? Its symptoms, dangers and treatment