The much-awaited consensus to unlock the revenue sharing formula has been reached.

This is after the Senate 12-member committee co-chaired by Moses Wetangu’la (Bungoma) and Johnson Sakaja (Nairobi) agreed to present a comprehensive report to the House leadership today.

Although the committee did not divulge contents of the report to be handed over to Speaker Kenneth Lusaka, Majority leader Samuel Poghisio (West Pokot) and his Minority counterpart James Orengo (Siaya), disclosed that a deal had been struck.

This is even as they warned county chiefs not to give excuses for providing inferior services or not providing at all, saying the National Treasury had given access of up to 50 per cent of last year’s allocation.

The committee has been meeting for eight days to strike a deal that would give the country a revenue sharing formula that takes into account the interests of all 47 counties.

A source familiar with the goings-on at the committee told The Standard that the committee had been banking on the National Treasury to see if it could give an additional Sh9 billion to the Sh316.5 billion that was allocated to the counties.

The source added that counties that were gaining in the third basis for sharing revenue have refused to budge, insisting on getting what they believe rightfully belongs to them.

“They have not responded to us but it is only the Treasury that will resolve this stalemate. It is not that easy,” the source said. 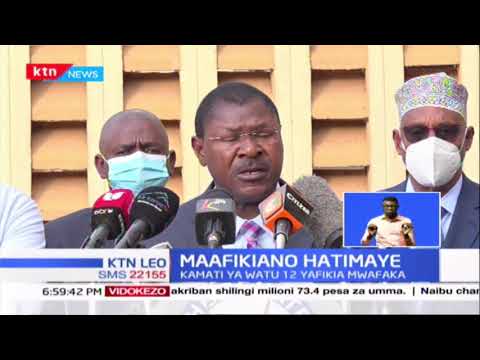 However, the committee’s request for additional resources is futile after President Uhuru Kenyatta poured cold water on additional allocation.

“This is not Uhuru’s money. This formula was crafted by the Commission on Revenue Allocation and went to the Senate, indicating that the revenue should be shared justifiably such that everyone gets their fair share,” the president said recently.

The Standard could not independently verify whether or not the National Treasury had okayed the Sh9 billion.

Wetang’ula yesterday told the press that the Treasury had issued a circular to counties, saying they would access 50 per cent of the funds based on last year’s allocation.

This is in conformity with the Supreme Court ruling that services at the county level should not be halted when Senate is still adopting the necessary formula for revenue sharing.

What First-Time Managers Should Never Say

What Nutritionists Think Of TikTok Health Trends, From Healthy Coke To Lettuce Water

An oral history of USA-Iran at the 1998 World Cup: Political tension, teammate betrayal and humiliation