Two Wisconsin police officers are on leave Monday as state authorities investigate why a Black man was shot multiple times in the back as he entered the driver’s side door of an SUV, officials said.

The man’s three children — 3, 5 and 8 — were in the car, a family attorney said.
Identified by Wisconsin’s governor as Jacob Blake, the man is in serious condition and fighting for his life. Attorney Ben Crump, who now represents the Blake family, posted a video of the Sunday evening shooting in Kenosha. The footage spread across social media, sparking protests and leading county officials to institute a curfew that remained in place until Monday morning.
The shooting came as demonstrators continue to decry police violence in American cities, including the encounters that killed George Floyd and Breonna Taylor. The night before Blake’s shooting, protests erupted in Lafayette, Louisiana, after police killed a Black man — Trayford Pellerin, 31 — outside a convenience store.
In Kenosha, a city of 100,000 located on the Lake Michigan coastline between Chicago and Milwaukee, protesters overnight broke windows and sprayed graffiti at a Kenosha County administrative building, according to CNN affiliate WISN. Vehicles at a nearby auto dealership were torched, a fire was started at a county courthouse and officers in tactical gear formed a line to protect a public safety building, the station reported.
Before the sun rose Monday, numerous dump and garbage trucks remained smoldering on the street after being set ablaze. The courthouse and administrative building were closed Monday, and all court hearings for the day are postponed, the county said on Facebook.

Kenosha officers were called to a domestic incident about 5:11 p.m. (6:11 p.m. ET), police said.
The shooting unfolded on a residential street packed with apartment buildings, a block from a city golf course. The Lake Michigan shoreline lies about a mile east.
In the video clip, an African American man walks around the front of a gray SUV with two officers a step or two behind him, one with his weapon trained on the man’s back. As the Black man enters the driver side door of his car, the nearest officer grabs the tail of his tank top and seven shots are heard.
The man entering the car appears to go limp. A sustained car horn blares. A woman nearby jumps up and down, apparently in anguish.
The police union representing the officers urged the public to withhold judgment until the state Justice Department completes its investigation.
“As always, the video currently circulating does not capture all the intricacies of a highly dynamic incident. We ask that you withhold from passing judgment until all the facts are known and released,” said Pete Deates, president of the Kenosha Professional Police Association. 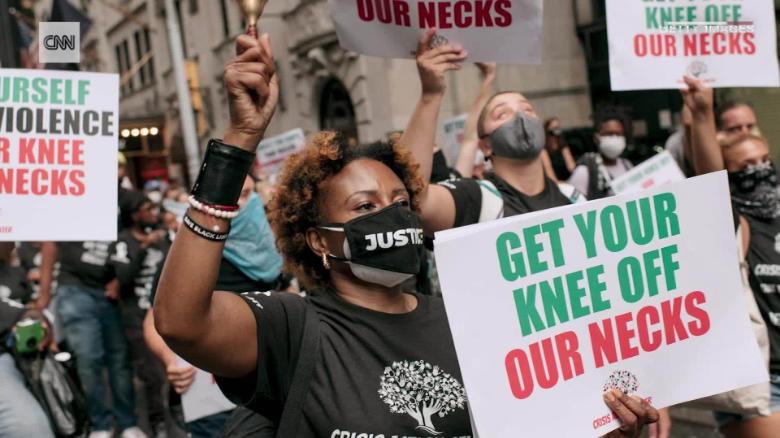 In a tweet, Crump, who represents Floyd’s family, says the man was leaving the scene after “breaking up a fight between two women.”
Officers were called to respond to a domestic disturbance, police said, but it’s unclear who called 911 or what happened before the video recording begins. In a police call, a dispatcher says Blake “isn’t supposed to be there” and that he took the complainant’s keys and refused to leave. The dispatcher later explains she doesn’t have more details because the caller was “uncooperative.”
The dispatcher’s report of shots fired comes about five minutes after the initial report. According to Crump, police had already used a Taser on Blake before the shooting.
It is not clear from the video if both officers opened fire. The second officer has his gun out as the shots are heard, the video clip shows.
Both are on administrative leave, said the Wisconsin Department of Justice’s division of criminal investigation, which is leading the probe into the incident. All officers are cooperating, the department said. Neither officer has been identified.
The state agency aims to submit a report to prosecutors within 30 days, it said, adding no further details are available.

Blake is at a Milwaukee hospital

Blake was critically injured in the shooting, said Gov. Tony Evers.
“Tonight, Jacob Blake was shot in the back multiple times, in broad daylight,” Evers said in a statement. “While we do not have all of the details yet, what we know for certain is that he is not the first Black man or person to have been shot or injured or mercilessly killed at the hands of individuals in law enforcement.”
Deates called Evers’ statement “wholly irresponsible and not reflective of the hardworking members of the law enforcement community.”
Following the shooting, police said, officers rendered aid before the injured man was flown to the Froedtert Hospital in Milwaukee. 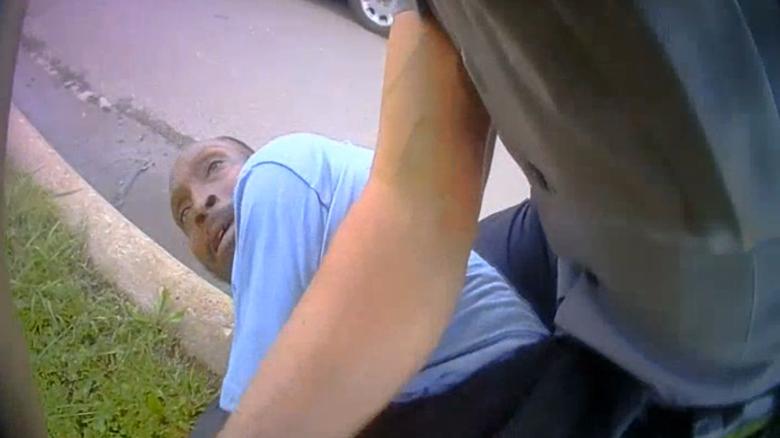 The Kenosha Police Department requested the scene be turned over to the Kenosha County Sheriff’s Department and Wisconsin State Patrol, it said in a statement.
Crump said Blake’s relatives reached out to his office for assistance. Though police did not provide details on the witnesses, Crump told CNN that Blake’s three young sons were inside the vehicle when their dad was shot and tweeted that the kids “will be traumatized forever.”
In a statement announcing the family had retained him, Crump said Blake was trying to “deescalate a domestic incident when police drew their weapons and tasered him. As he was walking away to check on his children, police fired their weapons several times into his back at point blank range. Blake’s three sons were only a few feet away.”
US Attorney General Bill Barr will provide a briefing on the shooting during a previously scheduled visit to the White House on Monday morning, White House chief of staff Mark Meadows said.
“From what I was briefed on, obviously, the video tells a story that’s troubling,” Meadows said, adding it’s still too early to tell what happened.
Jeffery Robinson, a deputy legal director with the American Civil Liberties Union, said Blake’s death — along with Floyd’s outside a Minneapolis grocery store, Taylor’s in her own home and Eric Garner’s in front of a New York bodega — demonstrates “the very institution of American policing is rotten at its core.”
Of Blake’s shooting, Robinson said, “With each of the seven shots fired, the police department made their intent clear — they believed they had the right to kill an unarmed Black man for the crime of walking away from them.”

‘It’s An Honour,’ Kayange Speaks On His Induction Into World Rugby Hall Of Fame

‘Bad timing For a defection,’ Political experts say On Waiguru’s move to UDA