The fallout between President Uhuru Kenyatta and his deputy William Ruto has reached a new level, shredding the last threads holding Jubilee Party which is now at a point of implosion.

Yesterday, six candidates that will take on Kenyatta’s Jubilee wing in the coming by-elections on United Democratic Alliance, (UDA) party were unveiled for Nairobi governorship, Matungu and Kabuchai constituencies and three wards.

This came as the DP held a meeting with the officials of UDA and MPs allied to him. Johnson Muthama, the new party’s interim chair, said they will go all out to ensure that the party wins all the seats.

But in a rejoinder, Jubilee chair Nelson Dzurya said they will be looking at the utterances and behaviour of the politicians in Jubilee with a view of taking action against those who have breached the party’s constitution.

“We are following up the matter, we will take disciplinary action against them where we find culpability,” Dzurya said.

Raphael Tuju, the Jubilee secretary general, said that the disciplinary committee of the party would follow up the matter.

“Such matters are up to the disciplinary committee to look at whether there is any flouting of the Political Parties Act and party’s constitution, and take action where they deem necessary,” he said.

The unveiling of former Starehe MP Margaret Wanjiru as the Nairobi gubernatorial candidate for UDA comes as the Nairobi County Assembly plans to vet Anne Kananu Mwenda who had been nominated by the former governor Mike Sonko.

A case challenging the validity of Kanau’s nomination by Sonko was withdrawn from court.

Kipchumba Murkomen, the Elgeyo Marakwet senator hinted at a showdown with Jubilee. “We have been frustrated in Jubilee but just like the Bible says, in the House of the Lord there are so many rooms, we have secured comfort in the one of the rooms.”

Kikuyu MP Kimani Ichung’wah was categorical, saying they had left the Jubilee House where they had been declared persona non grata.

Ugunja MP Opiyo Wandayi said that the purported launch of the candidates was too much ado about nothing.

“What we know is that political posturing, the party does not have any ideology, apart from the change of the colour of the uniform and their vision to take power.

“What do they stand for? They are a convenient mixture of frustrated politicians and nothing else,” Wandayi said.

Wandayi questioned the criteria that UDA used to select the unveiled candidates claiming that the country never saw nomination process but just picking of individuals devoid of a democratic process.

The by-elections in the two constituencies were occasioned by the deaths of MPs Justus Murunga (Matungu) and James Lusweti (Kabuchai). Other by-elections will be in London and Hell’s Gate Wards in Nakuru and Kiamakoma Ward in Kisii.

“We will have candidates in all the vacant seats. We should not be reminded of party loyalty because even the President the other day endorsed an ODM candidate. We are free to support any candidate of our choice,” said Kosgei.

Nominated Senator Isaac Mwaura said there was nothing wrong with UDA competing against Jubilee, adding that every political party has a right to go for the vacant seats.

“Any party has the right to nominate a candidate for upcoming by-elections. UDA is an affiliate party of Jubilee, with Senate Deputy Majority coming from the party so there is nothing wrong with the party competing with its partners,” Mwaura said.

But Nyeri Town MP Ngunjiri Wambugu said that it was morally wrong for the DP and other Jubilee leaders to push for the interests of a party that is hurting the outfit that gave them their current positions. 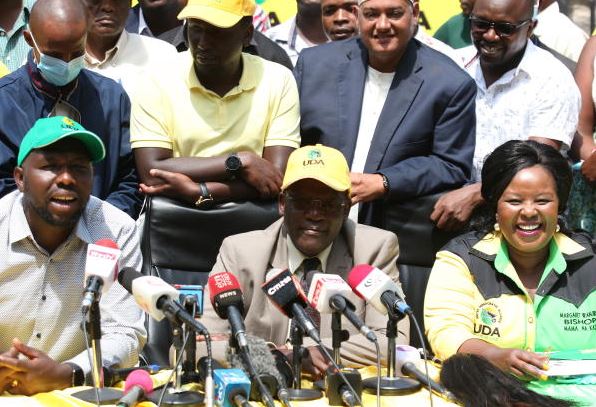 Entered into a pact

“They can argue that there is nothing legally amiss but morally, they know it is wrong. Their intention is clear: to bring down President Kenyatta’s party, they want to destroy Jubilee as they build their new party,” Wambugu said.

In the recent by-elections, Ruto and his allies supported an independent candidate in Msambweni though the president had said that Jubilee would support the ODM candidate in the spirit of the Handshake.

The signs of a fallout started after President Kenyatta won a second term in the 2017 General Election and on March 9, 2018 entered into a pact with his erstwhile rival, Raila Odinga, ending with a handshake which later birthed Building Bridges Initiative, which is now championing constitutional changes.

When President Kenyatta and his deputy posed for a photo opportunity after their swearing-in for their second term on November 28, 2017, their faces were beaming with joy.

Then the question is, what exactly happened to a relationship that started in 1999 when the duo met in Parliament after nominated MP Mark Too stepped down for Kenyatta to get a slot in the 7th Parliament?