Chelsea boss Thomas Tuchel keen to strengthen at centre-back after losing Antonio Rudiger and Andreas Christensen on free transfers; Kalidou Koulibaly has one year remaining on his Napoli contract; 31-year-old is a team-mate of Edouard Mendy with Senegal.

Chelsea are close to agreeing a deal with Napoli to sign Senegal centre-back Kalidou Koulibaly as they look to rebuild their defence for next season, according to Sky in Italy.

The central defender, who has 62 caps for Senegal, is also expected to sign a four-year contract worth around £160,000 per week (£8.2m a year) net plus bonuses to move to Stamford Bridge.

Koulibaly, who was also interesting Juventus, has just one year left on his Napoli contract.

Napoli held their first open training session of the summer in front of fans on Tuesday evening, however, Koulibaly was not present.

The Blues lost Antonio Rudiger to Real Madrid and Andreas Christensen to Barcelona this summer – both on free transfers – leaving Thiago Silva, Trevoh Chalobah and Malang Sarr as the only senior centre-backs in Thomas Tuchel’s squad. 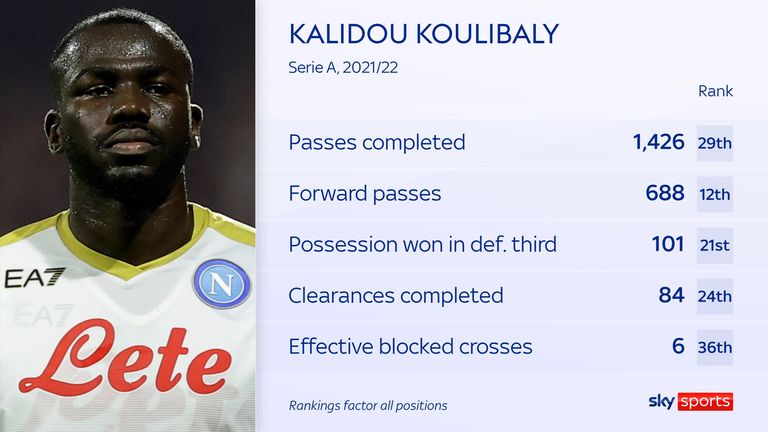 Koulibaly, 31, has made over 300 appearances for the Serie A club since joining from Belgian side Genk eight years ago, being named in the Serie A team of the year on four occasions, as well as being named the best defender in Italy in 2019.

The Blues are also keen on Juventus’ Matthijs de Ligt, but he reportedly favours a move to Bayern Munich.

Meanwhile, Raheem Sterling is set to become Chelsea’s first signing since the consortium led by Todd Boehly completed its takeover of the club. The City forward underwent a medical on Sunday ahead of his £47.5m move to Stamford Bridge.

‘This could be last chance for Napoli to cash in’

“I think we’ve been talking about Kalidou Koulibaly coming to the Premier League for the last 64 transfer windows! He’s 31 years old now and he’s entered the final year of his contract at Napoli, so maybe this is the time for Napoli. If they are going to get any money for him – and he’s not going to sign a new contract – then probably this is the summer to sell.

“Chelsea want to sign central defenders. Antonio Rudiger, he honoured his contract and is now a Real Madrid player on a free transfer. Andreas Christiansen did the same and now he’s at Barcelona. There’s still question marks as well about Cesar Azpilicueta and there are other defenders like Marcos Alonso as well. Thiago Silva might have turned up at pre-season training and thought, ‘where all the central defenders?’

“But Kalidou Koulibaly is one that they are interested in. They’re in talks. Juventus are also interested in Koulibaly as well. That could be as a potential replacement for Matthijs de Ligt, who is being linked with Chelsea as well.

“Another player who Chelsea are pushing to sign is their former defender Nathan Ake. We think that talks are continuing with Manchester City over that one.”

The arrival of Todd Boehly’s consortium as the club’s new owners – and with it the promise of large investment on and off the field – have ensured Chelsea supporters entered this summer riding a wave of optimism.

Even the departure of club record signing Romelu Lukaku on loan to former side Inter Milan – a move that served as an acknowledgment by both the striker and Chelsea that the transfer was a failure – couldn’t dampen the enthusiasm.

Allowing Lukaku to return to Italy was a move that made sense and, while the imminent arrival of Raheem Sterling hasn’t been met with universal approval from the fanbase, signing someone of his pedigree from a direct rival is a clear sign of Boehly’s ambition.

The signing of Sterling, as well as the attempted move for Leeds’ Raphinha – who is reportedly now likely to join Barcelona – also serves as a message to Chelsea’s current crop of forwards that their performances to date have not been up to scratch.

Unsurprisingly, a number of them are rumoured to be available to other clubs as part of what promises to be a busy summer in west London. Hakim Ziyech is a target for AC Milan, Timo Werner and Christian Pulisic have been linked with moves away, and Armando Broja – whose status at Chelsea is uncertain after spending last season on loan at Southampton – is of interest to several Premier League sides.

The clear targeting of wingers by Thomas Tuchel in this transfer window also raises the prospect of the head coach pondering a move away from his preferred 3-4-3 formation. But with a lack of strikers – not to mention centre-backs – how will Chelsea line up next season? How will Sterling fit in? And will Tuchel enter the season with Kai Havertz as his No 9, or push Boehly to make a stunning move for Cristiano Ronaldo?