Politics
Kamar went to the polls unopposed after Senator Judith Pareno withdrew her candidature hours before the House vote on Tuesday. 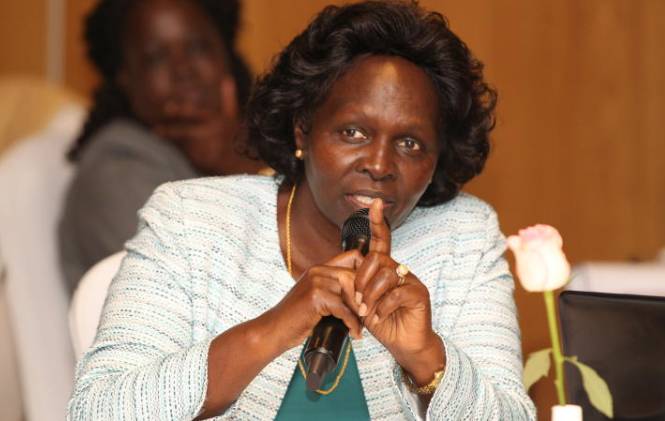 Uasin Ngishu Senator Prof Margaret Kamar (pictured) has been elected Senate Deputy Speaker.
The legislator was sworn in at 2.52 pm on Tuesday to take over the seat after the removal of her Tharaka-Nithi counterpart Prof Kithure Kindiki in a Jubilee Party purge.
According to Senate Speaker Kenneth Lusaka, following the withdrawal of all the four senators, Kamar was the only candidate for election to the Office of the Deputy Speaker.

“Standing Order 11 as read together with Standing Order 13(4) states that in the event that there is only one candidate who has been duly nominated for election as Deputy Speaker, that candidate shall be declared forthwith to have been elected Deputy Speaker without any ballot or vote being required,” Senate Speaker Kenneth Lusaka who administered the oath stated.
Kamar went to the polls unopposed after Senator Judith Pareno withdrew her candidature hours before the House vote on Tuesday.
Pareno, a nominated senator, wrote to Speaker Ken Lusaka explaining her withdrawal from the race after consultations with the Raila Odinga-led ODM party.
“Following the consultations with the leadership of my party, Orange Democratic Movement, I hereby give notice of my withdrawal as a candidate for election as the Deputy Speaker of the Senate,” she said.
Two senators, Kirinyaga Senator Charles Kibiru and Kilifi’s Stewart Madzayo withdrew from the race yesterday after Raila Odinga’s intervention.

Kamar who went to the polls with the endorsement of the Jubilee Party will now replace Tharaka Nithi Senator Prof Kithure Kindiki who was acrimoniously ousted from the position last month.
Kindiki’s removal was after a motion by Senate Majority Whip Irungu Kang’ata was filed in an ongoing purge against Deputy President William Ruto allies.
He was accused of violating various sections of the Political Parties Act, The Constitution of Kenya 2010, and The Jubilee Party Constitution.
The Deputy Speaker was also accused of refusing to attend a meeting held at State House on May 11, 2020, although an invitation had been sent to his last known mobile-phone number even as the matter was widely published in the media.
The purge in the Senate began with Ruto allies led by former Senate Majority Leader Kipchumba Murkomen, Prof Kindiki and former Majority Whip Susan Kihika being kicked out. They were replaced by West Pokot Senator Samuel Poghisio (Majority Leader) and Murang’a’s Irungu Kang’ata as Majority Whip.

It followed by other Ruto’s die-hards, Nandi Senator Samson Cherargei, Bomet’s Christopher Lang’at and John Kinyua of Laikipia being stripped off their chairmanship roles in key Senate committees.
And today, in yet another purge at the National Assembly, Majority Whip Benjamin Washiali and his deputy, nominated MP Cecily Mbarire, were shown the door. The duo will be replaced by Navakholo MP Emmanuel Wangwe and Igembe North MP Maoka Maore as Majority Whip and deputy Whip respectively.
Majority Leader Aden Duale was spared despite earlier indications that he would be replaced by Kipipiri MP Amos Kimunya as majority leader.
Kimunya has instead been appointed to serve as the secretary of the Jubilee Coalition Joint Parliamentary Group