DJs streaming live music on any platform should have a special broadcast license, this is according to the Kenya Copyright Board (KECOBO).

In a May 27, 2020 statement via its Twitter account, KECOBO warned that DJs were becoming broadcasters, violating copyrights and need licenses from owners or Collective Management Organisations (CMOs).

“Anyone who violates the exclusive rights of the copyright owner is an infringer of that copyright. When a DJ creates a live stream and starts broadcasting music to the internet, he has become a radio station. He needs licences from copyright owners or Collective Management Organisations (CMOs),” the statement read in part.

The directive comes amid the coronavirus pandemic that has resulted in the closure of entertainment joints and seen the cancellation of events where most DJs eke out a living, did not settle well with a section of netizens.

Some argued that there was a conflict of interest and highlighted what they said are grey areas when it comes to who should take the blame or if there is any blame at all.

A twitter user by the name Gabriel Maunda posted that the government should actually be looking into ways to alleviate the Covi-19 bite in the industry and compensate the DJs.

“This is the problem with Kenya and African governments mentality in general…  when you start making a move, they think of how they will punish you with taxes instead of giving you incentives so that you can grow, and then you wonder why people remain poor,” his tweet read.

On the other hand, James Obare weighed in on the issue saying some terms have to be defined first before any action is taken.

“In this age, that’s a complicated issue. For now, the word “exclusive rights” will define the whole statement.” He tweeted.

Shading more light into the issue, Paul Kaindo – an advocate at the Kenya Copyright Board warned that using someone else’s content (in this case, music) for personal financial gain is illegal and enough grounds for a lawsuit.

Kaindo went on to add that Kenyan DJs need to apply for two licenses; special broadcast licenses and a public performance licenses in order to conduct their livestreams.

Responding to the board, Joe Mfalme, a top Dj among those who will be highly affected by the new directive who has a show dubbed Club Quarantine, questioned the board’s decision to bring the issue at a time when they had already done over a month’s livestreams without anyone raising any issue.

“As DJs, we’re still trying to consult and understand this, but what we don’t get is why they’re bringing it up now. They haven’t engaged us directly…but we’re also still processing and consulting about it as DJs.” He said.

Other Dj’s on the line of fire include DJ Kym Nickdee –Curfew Party, DJ Moh – Cool Runnings and DJ Crème – Pyjama Party, among others.

KECOBO has followed up this witha clarification as we report below after outcry for DJ’s:

DJs affiliated to licensed business premises will not be required to pay to live-stream their music sets, this is according to a reviewed directive by the Kenya Copyright Board (KECOBO).

Setting the record straight following an uproar from the DJs over its May 27 notice, KECOBO clarified that disc-jockeys who perform at venues that have obtained a Collective Management Organization (CMO) license will not pay a cent.

Those who have, however, not paid will be required to fork out Sh10,000 annually or Sh750 per event, payable to CMOs as a tariff per gig or license.

“Recorded music in many jurisdictions is subject to rights management information monitoring technology that enables owners to account for its usage on digital platforms,” read the statement from KECOBO Executive Director Edward Sigei.

All DJs who live-stream performances containing recorded music are, however, subject to terms and conditions of the platforms they use, an aspect KECOBO reiterated, is beyond its jurisdiction and the ambit of licensing CMOs.

“It is recommended that a deejay or any other digital user wishing to exploit recorded music on digital platforms must whitelist their channels with rights holders as per terms and conditions of the platforms… Deejays are required to acquaint themselves with terms and conditions of service of the platforms that they intend to use and comply including paying for the music usage locally,” added Sigei. 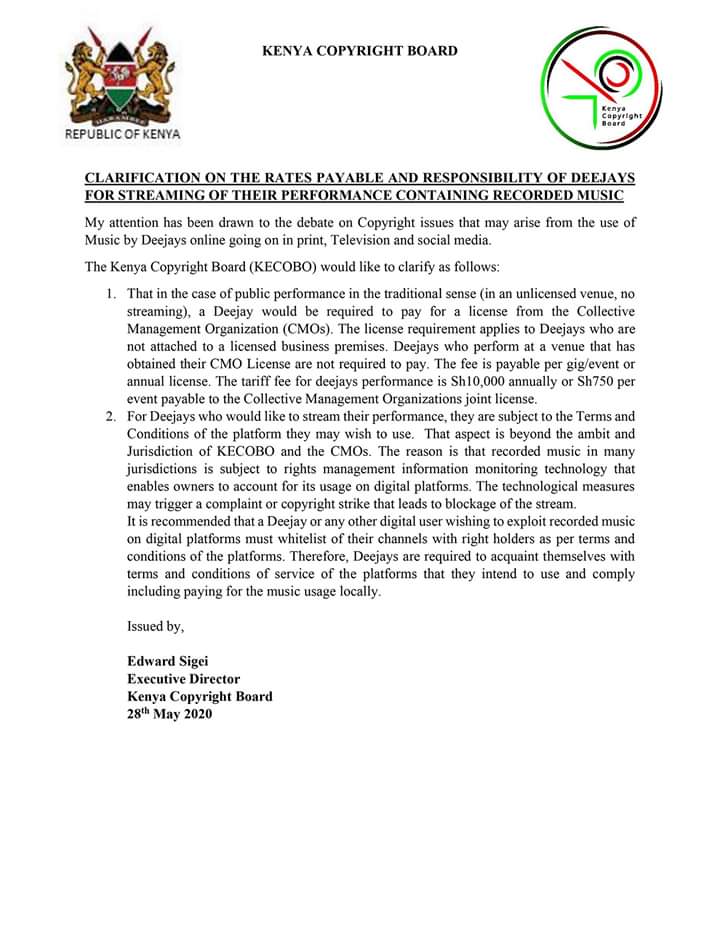 Backed by the Copyright Act Cap 130 and in response to an upsurge of live-streaming events especially by DJs who have turned to social media following the outbreak of Covid-19, KECOBO on Wednesday demanded DJs who live-stream music sets to obtain special broadcast licences.

“When a DJ creates a live stream and starts broadcasting music to the Internet, he has become a radio station. He needs licences from copyright owners or Collective Management Organisations (CMOs),” read the statement in part.

A move protested by among many DJ Joe Mfalme who questioned the timing and lamented that stakeholders were not engaged.

“As DJs, we’re still trying to consult and understand this, but what we don’t get is why they’re bringing it up now. They haven’t engaged us directly…but we’re also still processing and consulting about it as DJs,” said Mfalme.