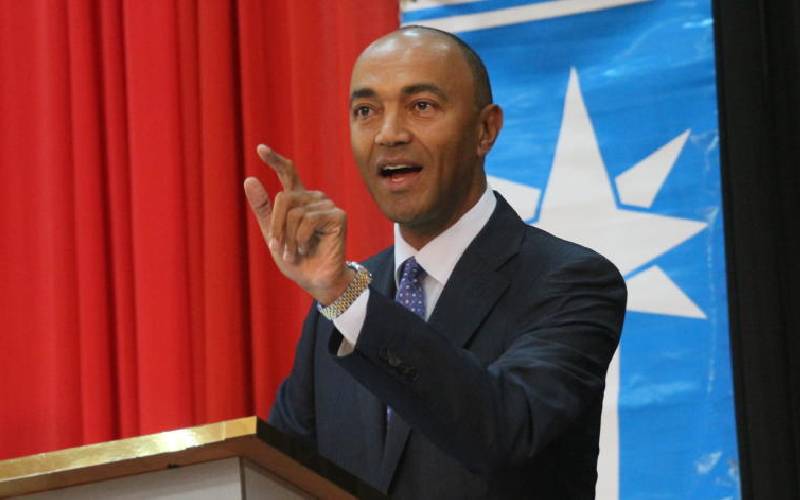 Former Gatanga MP Peter Kenneth’s (pictured) Saturday visit to the rural home of ODM leader Raila Odinga in the company of elders from the Agikuyu community has renewed debate on his place in the 2022 succession matrix.

With President Uhuru Kenyatta’s planned exit from the political scene in the next 21 months, central Kenya has grown increasingly restless, and there are those who are viewing Mr Kenneth’s increased visibility as a strategy to position himself as a possible candidate to fill the power vacuum.

A former assistant minister who saw his presidential and gubernatorial dreams crushed in 2013 and 2017, respectively, Kenneth looks keen to lace up again even as Deputy President William Ruto’s relationship with Uhuru sours.

He has held two meetings with Raila at his Capitol Hill office, and more recently at the Isinya home of the Central Organisation of Trade Unions Secretary General Francis Atwoli.

The head of delegation was Kikuyu Council of Elders chairman Wachira wa Kiago.

Looked at in totality, the meetings offer a glimpse of behind-the-scenes manoeuvres that could see Kenneth, who will be 56 next month, gifted the role of a willing bride who Raila would depend on to woo central Kenya in 2022.

There is also the view that Raila is being pushed towards Kenneth, who it is said he has a soft spot for. During the funeral of Kenneth’s mother last year, Raila asked President Kenyatta to consider him for a Government position.

Kenneth served as Kenya Football Federation chairman between 1996 and 2000, and is credited with bringing a level of professionalism to the beleaguered league.

Two weeks before the Nyanza visit, Kenneth met with elders and spiritual leaders of the Kikuyu community in Nyeri, ostensibly to seek their blessings to run for the presidency after Uhuru steps down.

After the four-hour ritual at the Mathingira Mahiga Matatu Cultural Centre and the Agikuyu shrines inside Mt Kenya Forest, the elders emerged only to declare him a cultural ambassador.

Yesterday, Kenneth said people were reading too much in the visit to Bondo: “I was there because I had been invited by elders. It was nothing political. It was a cultural event between the Kikuyu and Luo elders.”

He said his chief interest is to support President Kenyatta deliver on his agenda, as well as to ensure that the Building Bridges Initiative (BBI) sails through.

“With the BBI proposing increased allocations to the devolved units, and therefore empowering the 47 counties, I support it and I urge Uhuru and Raila to unveil it so that Kenyans can read it,” he said.

“Actions speak louder than words. He, however, needs to build a strong support base in his backyard so that he can be able to command respect and leverage on this clout,” said Mr Mwaura.

Jubilee vice chair David Murathe and National Assembly Minority leader John Mbadi were guarded in their responses to Kenneth’s role in the grand scheme to install Raila in State House.

Mr Murathe said while there are plans to have Raila serve one term as president, the matter of his running mate had not been discussed. “We will have a delegation of Raila supporters visit Nyeri in two weeks. From there we will escalate to more meetings, including the Njuri Ncheke and Kiama. Gradually, we will see what fits in.”

Mr Mbadi opined that it is too early to conclude that Kenneth is positioning himself for a plum post should Raila decide to make a stab at the presidency for the fifth time.

“We cannot conclude that Kenneth will be a running mate of Raila. In any case, Raila has not declared that he wants to vie although we want him to vie. There is nothing wrong if Kenneth positions himself. When the proper time comes, the right person will emerge,” said Mbadi.

Nyeri Town MP Wambugu Ngunjiri answered the Kenneth question with a proverb: utongoria ndukunukaga ta makunu (leadership emerges like mushrooms, that is, it is not propped up).

“Kenneth is yet to emerge and be trusted by the region to represent the community in any negotiations. For Mount Kenya, you do not negotiate outside then come and ask the people to start supporting you,” said Mr Ngunjiri.

The MP said any potential leader will have to win the residents’ trust and carry their aspirations. “At the moment, Mr Kenneth is yet to earn the community’s respect and mandate to go out and speak with others. He still has a long way to go.”

Mr Kamanda said the community’s kingpin is still President Kenyatta and they will wait for his guidance on the succession matter.

Kabando wa Kabando said everybody is free to pursue their dreams and do what they want to do.