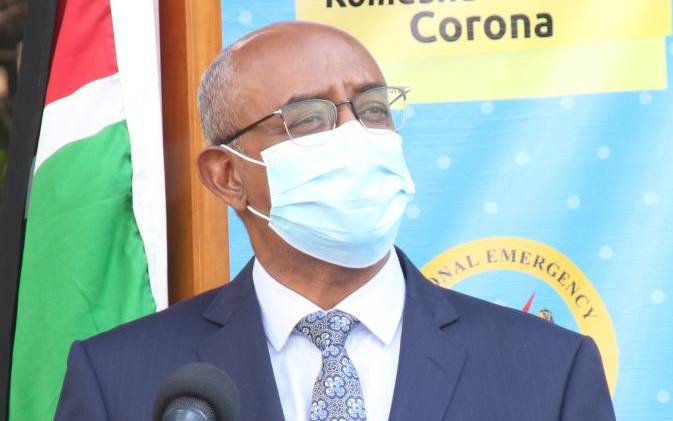 Kenya’s coronavirus tally has climbed to 2,216 after 123 people tested positive for the virus over the past 24 hours.
Speaking during the daily update on the pandemic, Health Chief Administrative Secretary Dr Rashid Aman (pictured) said that the health ministry tested 2,112 samples of which 123 were found to be carriers of the virus.
The country has now tested 85,058 people since the first case was noted on March 13. Nairobi leads with the giant share of positive cases at 44, followed by Mombasa’s 34, as the border point county Busia comes in third with 20 cases. Other cases were from Nyeri, Kajiado, Laikipia, Garissa and Uasin Gishu counties.

SEE ALSO: Noble projects that are yet to see light of day

Nairobi cases were from Kibra, Westlands, Dagoretti, Embakasi-West, Langata, Ruaraka, and Kamukunji.
Mombasa cases came from areas such as Mvita, Jomvu, Changamwe, Likoni, Kisauni and Nyali.
Dr Aman also announced that three people had succumbed to the virus among them a 12-year-old who tested positive for the bug posthumously. Two deaths were registered in Nairobi while one was noted in Nyeri.
According to the statement by Dr Aman, a huge portion of those who tested positive were truck drivers who in the past have travelled within the East African region. For example, he said that all 20 people who tested positive in Malava, Busia County are truck drivers. The same case applied in Turbo, Uasin Gishu County and Kajiado County. These are areas frequented by the truckers.
With the recent traffic snarl-up at the border points proving to be a daunting challenge; Dr Aman has appealed to the truckers and their employers to work on acquiring clearance certificates to help them pass the border.

“We appeal to truck drivers and employers to ensure that drivers undertake their journey upon having Covid-19 free certificate,” he stated.
Backlogs and crises
Dr Aman lamented the backlog currently witnessed in testing samples and relaying the results on time. He attributed the delays to the several samples being delivered countrywide and the logistical processes involved to have them taken to the laboratories for testing and release of results.
Also, he said that the ministry had been forced to prioritise some areas that necessitate the urgent release of results to avoid crises. This, in turn, translates into delays in the release of results in some areas.
He exuded confidence that with the setting up of two mobile laboratories in Namanga and Naivasha clearance points; the traffic snarl-up at the points of entry will be minimised.

“We have activated two laboratories. One is in Namanga border point and another is in Mai Mahiu in Naivasha. They will serve truckers by providing sample collection and testing points…to ensure they can get the certificate before crossing the border into another country.”
Other areas of focus are the prisons and other correctional facilities which he said the government is working on addressing congestions and isolating infected persons to avert mass infections.
Dr Aman hinted at possible relaxation of coronavirus measures imposed in the country if the numbers work in favour of the government.
He said: “Figures we are looking at now as we continue to focus on some of these areas are a bit encouraging…”