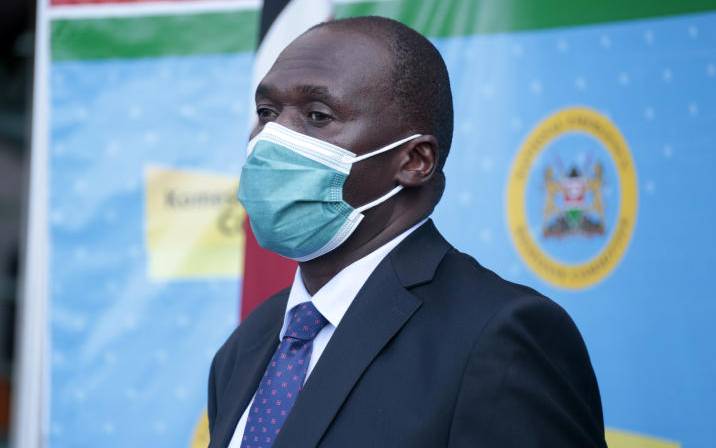 The government is considering locking down Nairobi’s Kibra, the latest Covid-19 hotspot, even as it projected the peak of the disease to hit in August.
During this peak, the government projects a daily tally of 200 new cases.
This comes as a new high of confirmed cases was reported yesterday, pushing the number to 1,109 after 80 people tested positive.

The 80 were confirmed from a sample size of 3,102, also the highest so far tested within 24 hours.
An earlier model shared by the Ministry of Health indicated that the disease would reach its peak in April, where there would be 5,000 cases by mid of the month and later 10,000 by the end of the same month.
Health Director-General Patrick Amoth (pictured) yesterday said the model was for the worst-case scenario expected if no interventions were put in place.
The government implemented measures after the first case was reported on March 13, with the institution of lockdown, curfew, the mandatory wearing of masks and physical distancing.
“We, however, now predict that our peak will be around August and September, where we will be reporting 200 cases a day and that is if we continue with the measures we have put in place,” said Dr Amoth.

SEE ALSO: Why Namanga will not be locked down despite increased Covid-19 cases

He added that the graph had so far not witnessed a spike of cases, instead of remaining smooth to an extend hospitals were not strained.
“This is the model we are looking at, even as we plan on how we can reopen schools and our economy,” he said.
200 cases daily
Despite the expected tally of 200 cases daily in the next few months, the DG said such a figure should not be a shocker, especially considering the country has expanded its testing capacity.
“It will not be surprising that when we test 4,000 samples we get 100 confirmed cases. Even when we report such cases, with the measures we have in place, our curve will still be smooth,” he said.

But while the general curve of the disease in the country may be smooth, the same cannot be said for Kibra Constituency in Nairobi, which reported 13 new cases yesterday, putting it on the red zone, the same category with Kawangware and Eastleigh.
On May 19, Kibra had 24 cases, the following day 15 and yesterday there were 13 cases.
“That is one area that we might be locking down,” said Amoth.
Health Cabinet Secretary Mutahi Kagwe noted that the seven cases in Siaya were also linked to Kibra after some individuals travelled upcountry for the burial of a kin, only for all of them to later test positive.
He said the permit on the burial was signed by an unauthorised person, and police respected it allowing the mourners to pass all roadblocks.
“There is a reason why we lock down areas and institute cessation of movement orders in Nairobi. But people think they are being clever to take a body for burial, which is a case of biting the nose to spite the face. This disease will kill you,” the CS said.