“The Late Show” host Stephen Colbert went live after the first night of the Republican National Convention and was baffled by what he had seen.

In particular, Colbert was stunned by the speeches from Donald Trump Jr. ― son of President Donald Trump ― and his girlfriend Kimberly Guilfoyle. Trump Jr. delivered a sweaty rant that name-checked the Loch Ness Monster while Guilfoyle fired off a screaming speech that had Colbert reaching for the volume control. Or, as Colbert described it, “some very nuanced screams.”

Then he rolled clips of Guilfoyle’s loud address.

“And that wasn’t her only story to shriek,” he said before throwing to footage of her even louder closing lines in which she told viewers that Trump “emancipates you and lifts you up to live your American dream!”

When the camera came back to Colbert, he was in hiding.

“Is the loud lady gone?” he asked as he reemerged. “I’m scared. It’s the first time in my life I’ve had to turn down the volume on C-SPAN. God, I’m glad we already had our kids because I was too close to the TV, I might’ve been sterilized by that.”

“Either he’s high or that’s what happens when you live in the splash zone of Screamin’ Guilfoyle,” he said. “Just bring a poncho.”

Check out his full segment below: 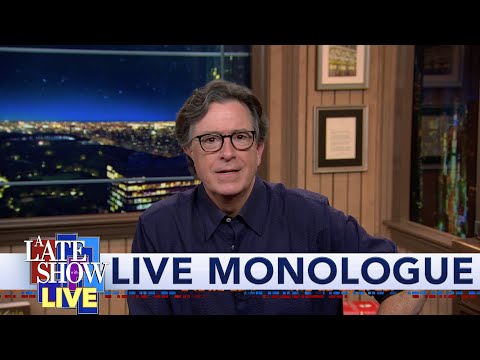