Elgeyo Marakwet Senetor Kipchumba Murkomen has today caused a stir during the unveiling of the Building Bridges Initiative report at the Bomas of Kenya, Nairobi.

The senate majority leader appeared to have been piqued by Suna East Member of Parliament Junet Mohammed’s comments over perceived division in Jubilee Party.

“Today we are launching the BBI. The problems facing Jubilee party should be discussed aside. We’re not part of it,” said Junet.

President Uhuru Kenyatta was seen laughing uncontrollably to Junet’s remarks while his Deputy, William Ruto who was seated next to him had a blank face.

Murkomen who spoke after Junet made the remarks, appeared irked by them and accused the organisers of the event of side lining those who were perceived to be against the BBI.

“This program has been skewed to leave other people who have different opinions to speak what they want to say. If we are going to build an honest Kenya going forward, we must be able to put our views on the ground,” vented Murkomen.

Murkomen went on and on amidst jeers by a section of the attendees, a situation that forced Senator Yusuf Haji to calm them down.

The boos, however, did not deter Murkomen from expressing his displeasure, bemoaning people with different views being side lined.

“It starts with those who mobilised the people who came to this podium. Because if this podium is going to be used to lecture other people then give them a chance to express their views. We must come out and give out our voices,” he said.

Senator Hajji intervened by asking the crowd to bear with Murkomen and allow him to express himself.

“Tuwe na heshima, Rais wetu yuko hapa. Mpeni mtu huyu nafasi. (Let us be respectful. Our president is in attendance and Murkomen should be given his chance),”

Hajji said, adding, “Please give him time, Murkomen will have his say and we too will have ours”.

The crowd finally calmed down and the Elgeyo Marakwet Senator continued with his speech but this time around, praising the BBI.

Wiper Party leader Kalonzo Musyoka who spoke after Murkomen asked him to tone down on the anger and preach peace.

“This is not the time to be angry. Anger cannot resolve anything. Do not be ashamed to say sorry for opposing the BBI and seeking forgiveness,” he said. 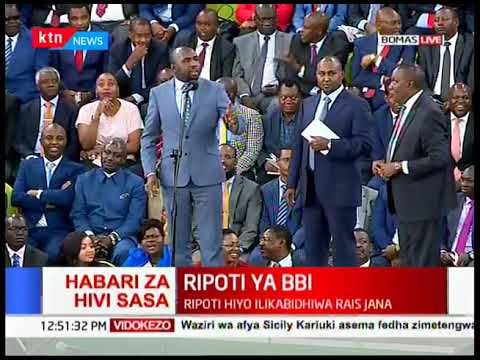