Kenyatta National Hospital (KNH) workers have gone on strike on Monday morning accusing the Salaries and Remuneration Commission (SRC) of failing to harmonise their salaries.

Hospital’s union faults the SRC for failing to implement the 7a clause made in 2012, which elevated the status of KNH to a parastatal consequently elevating all the 7,000 employees’ salaries to a different scale. According to the union, the agreement was passed by parliament and funds released by treasury but the trigger to flush the funds to the workers’ accounts remain untouched by SRC.

Kenya National Union of Nurses (KNUN) Secretary-General Seth Panyako bashed the commission blaming it for failing to execute its role even though other organs of the government have already given the green light to have the funds in the KNH workers’ bank account.

“SRC is behaving as if it wants to prefect every organ in this country and we cannot have workers go on strike when money has gone through the budgeting process by the relevant organs of this government and especially being passed by parliament,” said Mr Panyako.

Panyako explains that the passive stand by SRC is due to a desire to carry out another job evaluation; a move sharply criticised by the union.

The workers further allege that they have remained stunted in same remuneration formula as the CEO has been forced to work with salaries proposed in 2012.

“The salaries of other health workers in KNH was not increased and that has remained a historical injustice since 2012 up to now, said Panyako. 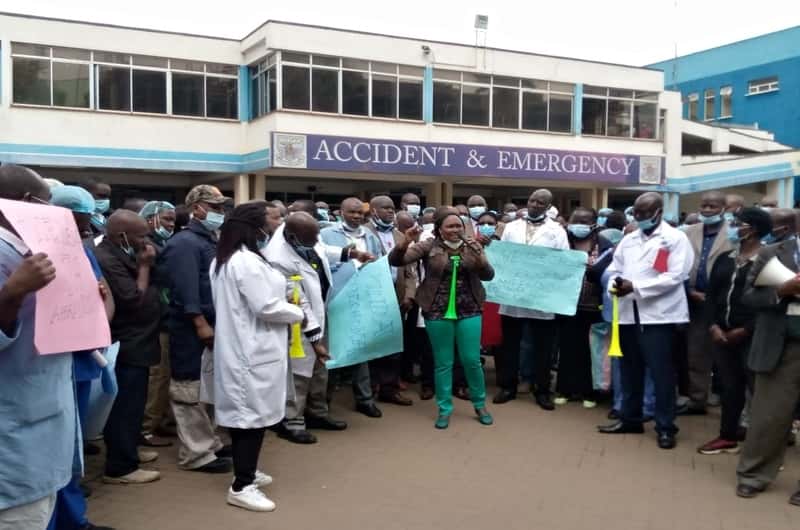 The nurses union boss has insisted that they are not going back to work and will meet with not meet any other government agency. Panyako says they are only waiting for SRC to do what it should have done eight years ago.
“What we want is to see SRC give that letter, advising Kenyatta National Hospital to effect payment of that money to all affected employees and thereafter the strike will be called off,” said Mr Panyako.

He further made a wild allegation that SRC was planning to revert the money meant to pay the workers back to the treasury.

“Parliament approved the money through the budget financial year 2020/2021. The National Treasury released Sh 601 million to KNH for implementation and therefore the only problem that we have is that SRC doesn’t want KNH to implement it,” said Panyako.

Attempts to reach SRC Chairperson Lyn Mengich for a comment bore no fruits after her calls went unanswered.

The strike by KNH workers comes at an unfortunate time when the health sector grapples with the Covid-19 pandemic and mushrooming strikes from health workers from different counties over delayed pay, perennial non-promotion and no health cover.

Is Mourinho running out of time at Roma?