A day after Treasury Cabinet Secretary Ukur Yatani rejected the list of the nominees for the Kenya Ports Authority Managing Director, the post has been re-advertised.

In an advert appearing in the dailies today, the KPA Board of Directors invited applications of candidates who wish to fill the position of the port MD.

On March 3, 2020, Yatani (pictured) said the nominees selected by the board failed to score at least 70 percent in the interview, according to President Uhuru Kenyatta’s Executive Order No 7 of 2015.

He gave the KPA board 45 days to repeat the exercise and thereafter submit a new list of three nominees from which he will choose one candidate for the appointment.

The advert that appeared in the two dailies on Friday however was a copy and paste of the one of April 24, 2020, whose outcome was rejected by the CS.

Last year, over 150 candidates applied for the post but the interview was delayed by the outbreak of Covid-19. The post was left vacant following the resignation of Dr Daniel Manduku.

In the first botched process, the current acting MD Eng Rashid Salim said he did not apply for the interviews. It was not clear whether Salim will submit his applications.

In an interview on Wednesday, CS Yatani said because of the sensitivity of the job and the long-term programmes, the new KPA MD must be a person with utmost competence.

But former KPA MDs, Manduku and Brown Ondego, told the Standard earlier this week that the candidate should also be fearless and brave to weather several competing interests at the port.

“I have reviewed the list of names and ranking of the candidates proposed for appointment as Managing Director, Kenya Ports Authority, and noted that all the candidates scored below the desired threshold of 70 per cent in the interview,” read Yatani’s letter to the board chairman Gen (Rtd) Joseph Kibwana.

In an advert signed by the board’s chairman, all interested candidates must submit their applications not later than March 19, 2021.

The advert offers a three-year contract for the new MD who shall meet all the qualifications by the Board.

The new MD is expected to support the formulation and implementation of the integrated strategic plan for the growth of KPA and the achievement of KPA’s vision mission and corporate objectives among other roles outlined in the advert.

“An attractive remuneration package and benefits determined in line with prevailing public sector guidelines awaits the successful candidate.  This contract is on contractual terms for an initial period of three years and is renewable for a further term of three years based on performance and business requirement,” the advert read.

Applicants must be holders of Bachelor’s and Master’s degree in any of the disciplines; Port Management, Maritime and Shipping Logistics, Engineering, Business, Social Science, Public Policy, Science and Technology, or related field from a recognized institution.

The candidates must have knowledge and experience of not less than 15 years of relevant work with at least eight years served in a managerial role in a large organization-either commercial or public entity with a national mandate.

Apart from being a member of a recognized professional body and in good standing, the applicants must have experience in Strategic Leadership Development and Corporate Governance.

The Board also seeks a candidate with a thorough understanding of public sector policy and reforms, corporate planning and relevant legislation and knowledge and understanding of the port industry and naval or maritime operations will be an added advantage.

The applicants are expected to submit copies of their academic and professional certificates, testimonials and curriculum vitae and state their current position, remuneration and three referees to KPA Chairman.

Yatani said that the credentials and experience must not draw any doubts on the holder’s ability to turn around operations of the Port, which is the priority with KPA.

The board and the ministry refused to reveal the names of the three candidates that had been submitted to the CS.

“President Kenyatta should veto Treasury CS @BaloziYatani decision to reject the three board nominees for @Kenya_Ports MD job on the excuse that none of them raised 70% threshold. Legally, CS can only reject when the process was flawed. Scores are estimates,” Cofek tweeted. 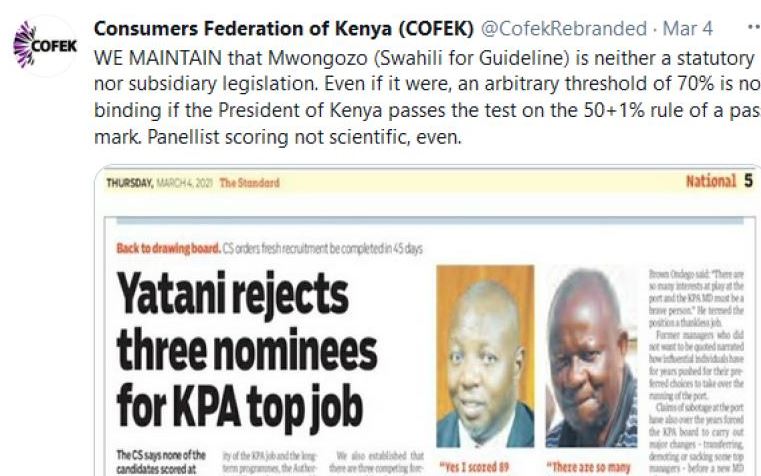