Under the 2010 constitution, Kenya had five years to enact laws ensuring no more than two-thirds of members of elective public bodies are of the same gender.

And on Wednesday, the Law Society of Kenya (LSK) argued the August House cannot escape the wrath of the law for its failure.

LSK president Nelson Havi, in his submissions before a five-judge bench, was of the view that Covid-19 cannot stop the country from conducting by-elections once the President sends the MPs home.

“Failure by Parliament to enact two-third gender rule invited a Constitutional penal consequence of dissolution. The significance of this penal consequence was underscored by the Court of Appeal. Covid-19 cannot be a reason why we should not dissolve parliament,” said Havi.

He blamed the country’s failure to meet gender parity on both Parliament and the Executive. Havi said it was in order for the third arm of government, the judiciary, to act after court orders were not followed.

“The two arms of government – the Executive and Parliament – failed in their people in ensuring gender equity. The Judiciary has performed its role; the other two arms have failed. We have a provision to have by-elections,” he said.

Havi added: “I humbly urge the court to dismiss petitions challenging the advisory by the Chief Justice. We will have failed Kenyans if we did not ensure fundamental rights in the bill of rights are actualised.” 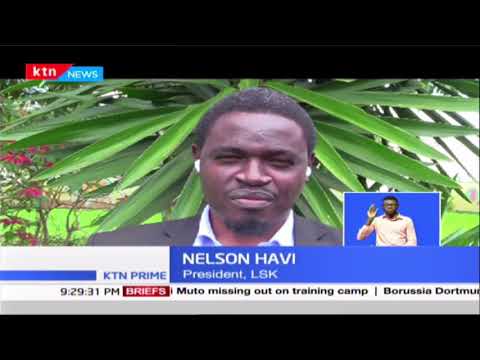 This came as the Kenya Huma Rights Commission (KHRC) faulted parliament for failing to obey court orders. Lawyer John Khaminwa, who represented the lobby in the case, argued failure to implement the two-thirds gender rule demonstrated how the government in general ignores orders from courts.

“This is a case of how the government disobeys court orders. You recall they disobeyed several orders in the case of Miguna Miguna,” he argued, and urged the court to affirm that MPs should go home.

Appearing before justices Lydiah Achode, Pauline Nyamweya, George Odunga, James Makau and Anthony Ndung’u, Dr Khaminwa asserted that the country should bear the pain of by-elections to uphold the constitution.

Justice Maraga, in his reply, told court parliament saw the whip coming but all along ignored or refused to obey court orders.

He said Parliament exhausted the grace period given to them to pass the law and implement it. They then moved on as if court orders compelling them to act would not come back to bite, according to Maraga.

The former CJ noted that Justice John Mativo issued orders to enforce the two-third gender rule and stated the consequences of failing to act.

Maraga argued that Parliament cannot now claim it was never given chance to give its side of the story as the two speakers of Parliament appealed the same and lost.

“We urge you to look at the history and the conduct of the petitioners. It cannot be said they were not aware. The time under the Constitution, the fifth schedule was very clear, and the extension of the time was very clear. It shows the consequences of default, step by step. The public interest is to uphold and defend the constitution and that is what he did and cannot be faulted,” Maraga said through lawyer Ochieng Oduor.