Film-maker Spike Lee has said people in the US are angry because they “live every day in this world where the system is not set up for you to win”.

The Oscar-winner said the reasons for the current unrest included the deaths of black people like George Floyd but also wider injustices and inequalities.

Mr Trump has threatened to send in the military to quell growing civil unrest across the US.

On Monday, the president walked from the White House to a nearby fire-damaged church to pose with a Bible, after demonstrators were cleared from his path.

Lee, whose new Netflix film Da 5 Bloods follows a group of African-American war veterans, said: “I was watching this last night with my family and we were all screaming in disbelief that this thing was staged.

“This show of force – gassing, beating innocent, peaceful bystanders so you could clear the street so you could take a walk to the church. It was ridiculous.

In his speech before walking to the church, Mr Trump said: “I am your president of law and order and an ally of all peaceful protesters.”

Many US cities have seen demonstrations and unrest since the death of 46-year-old Mr Floyd in Minneapolis on 25 May, when a white police officer knelt on his neck for almost nine minutes.

On Sunday, Lee released a short film combining footage of Mr Floyd and Eric Garner, who was killed while being arrested in 2014, with a scene from his 1989 film Do the Right Thing in which the character Radio Raheem is murdered. 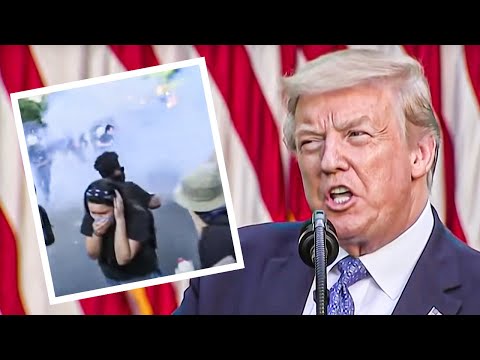 “Why are people angry?” Lee said on Tuesday. “People are angry because black people are being killed left and right, cops walked away free.

“Black and brown people are angry at the disparity between the haves and have-nots – education, drinking dirty water, racism.

“People are angry for a reason. It’s not like you’re just born angry. You’re angry because you live every day in this world where the system is not set up for you to win.

“The life expectancy… There are just so many things that one could make a list of [them] forever – that’s where the anger’s from.

“It’s a stupid analogy, but if you leave the pot on the stove, the water boils.”

Social inequalities have been particularly evident during the coronavirus pandemic, he said, with people from minorities more likely to die after contracting the disease.

“It’s the black and brown people who had to go to work, front-liners of all aspects, they kept this [country] going,” he said.

And racism is far from being unique to the US, he added.

“Racism is all over the world. This was a global pandemic before corona.

“I’m a very spiritual person and I don’t think that’s a coincidence that these two things are happening at the same time.”

He traced the inequalities in the US back to the country’s foundation.

“So the foundation of the United States of America is genocide, stealing land and slavery.

“Any architect will tell you that if you don’t have a strong foundation, the building’s going to be shaky, and shaky from day one… This original sin has not been dealt with since the birth of this country.”