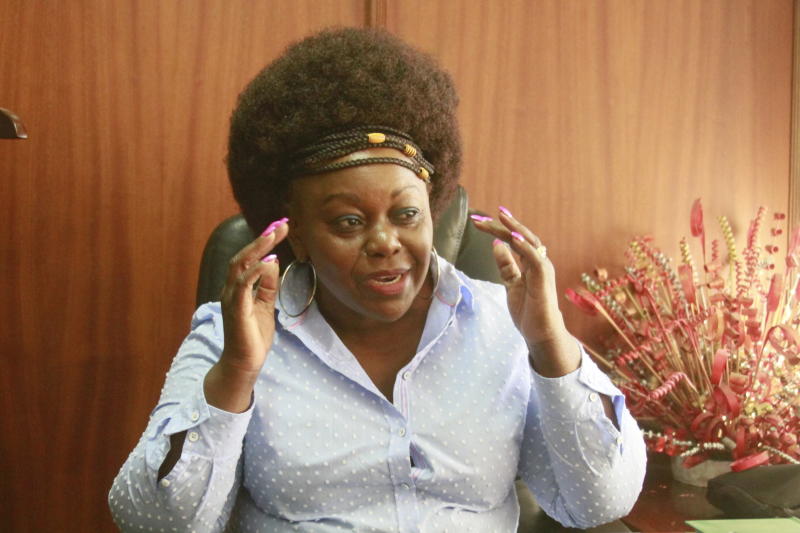 Suba North MP Millie Odhiambo (pictured), has denied shouting down Deputy President William Ruto at Bomas of Kenya yesterday saying she was only answering questions posed by the DP in his BBI address.

The outspoken legislator claimed she lacked a microphone to respond to him as he poked holes on the Building Bridges Initiative (BBI) report.

“I was answering his questions because he was asking us questions about what should be done, and I was basically reminding him he is the deputy president and I should be asking him the questions he was asking and not vice versa,” the MP said in an exclusive interview with KTN News.

She concurred with DP Ruto’s thinking when she acknowledged that there may be areas that need strengthening in the report even if it promises more gains to the Kenyan people.

“There are some issues that will be addressed through the constitutional review and some through legislative action,” she said.

Yesterday, the DP rose up during the launch to put a strong case for his position on the BBI report.

In his speech, he said the real elephant in the room was the post-polls winner-takes-it-all mentality which the BBI was trying to address by creating the position of the Prime Minister and two deputies.

But he wondered how that would take care of other big political heavyweights who would still find themselves without political offices.

Midway his speech, as he raised these issues, he had to fight off jeers by a section of the delegations when some shouted “Respect the President.”

According to the Suba North MP, DP Ruto was talking of a coalition government something that the BBI report is not addressing.

“BBI is talking about inclusion [and] we are saying that in a case where you win as a president, then you need to expand the framework of regions that are represented in the executive,” she said.

Odhiambo said the majority of the Tangatanga MPs chose not to show up despite being invited to the forum that was to be used to air issues in the report.

This has been dismissed by DP Ruto ally, Kikuyu MP Kimani Ichungwah saying the process was surrounded with hypocrisy.

He echoed Ruto’s remarks that the report did not touch on issues affecting Kenyans such as unemployment of the youth, saying this ought to constitute the national dialogue.

“The only two people who captured imaginations of Kenyans were DP Ruto and former vice president Musalia Mudavadi,” he said, adding that, “those are the only people who were bold enough to articulate the real issues affecting Kenyans.”

Despite being heckled Ruto made his remarks insisting we needed to have a candid discussion before the report is embraced.