Mr Brainwash was discovered by grafitti artist Banksy. Inspired by Marvel and neon, his message is inspiring and uplifting 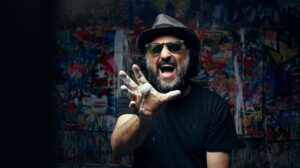 What I love about Mr Brainwash is his constant enthusiasm, his ginormous open-mouthed smile and exhalation of positivity wherever he goes. He’s unapologetically happy. When he greets the camera, he even lets out an inner scream that is so subtle and fun that you feel like you are with that one person who is always having a good time.

What defines his art and what makes the enigma of who he is and why are his creations so appealing?

He focuses on love, happiness, truth, friendship, and the expression of positive feelings. With the use of cartoons, Marvel comics, bright neon lights, balloons, and iconic pop icons who make us smile, Mr Brainwash has a rare gift of expressing happiness and nostalgia. We long for the simplicity of a bygone era where Elvis, Marilyn Monroe, Charlie Chaplin, and Mickey Mouse graced our screens and now, they are being romanticised in Mr Brainwash’s artwork.

Adorned with a flat floppy hat, baggy trousers, and beard, I can imagine Mr Brainwash as the modern Charlie Chaplin (who is showcased in many of his artworks).

Mr Brainwash (aka Thierry Guetta) was discovered by infamous street artist Banksy whilst working as a vintage clothing store manager in Los Angeles who then captured his story in the 2010 Academy Award-nominated film Exit Through The Gift Shop.

Modern graffiti or street art was classified as such in the 1970s with Philadelphia’s Darryl McCray “Cornbread”, New York’s Julio 204 and Taki 183. To “tag” or spray art on a wall or subway station was known negatively as “graffiti”, was seen as illegal, and were mostly found in poorer neighbourhoods with local councils scrubbing off the work. The change of perception about graffiti as art happened around the time neo-expressionist Jean-Michel Basquiat rose to fame in the 80’s as part of a graffiti art duo called SAMO in New York.

Now, a Banksy graffiti drawing on the side of a building will INCREASE its property value. Now, Basquiat’s artwork is being showcased in the latest 2021 Tiffany advert with American rapper Jay Z and a yellow-diamond adorned Beyonce: two of the most well-respected and celebrated music artists in the world. Tiffany is the epitome of luxury; bought in November 2020 by LVMH as part of a multi-billion dollar deal. In 2021, Tiffany has associated itself with art that, 30 years ago, would have possibly been removed.

How did this shift in art and culture change?

In London, billions of dollars have been poured into one of the hottest new luxury regeneration projects called Battersea Power Station. With multi-million-pound luxury apartments, high-end restaurants, and coffee shops, Battersea Power Station is also getting a luxury art injection of its own by street artist Mr Brainwash.

On Thursday 23rd September, Mr Brainwash’s latest 17-metre art piece was unveiled at Battersea Power Station then digitally projected onto the whole building’s façade to make the statement “luxury is here.” Famous graffiti art is now a statement for the super-rich with brands like Hublot partnering with artists such as Mr Brainwash to show their bespoke creativity. This luxury and art collaboration now signals prestige.

Mr Brainwash flew into London to exclusively showcase his work at top art gallery Clarendon Fine Art Covent Garden. The Clarendon Fine Art brand is part of the world’s largest and most exciting gallery group and is dedicated to the presentation of the finest British and international artists, introducing exceptional contemporary art to established and emerging collectors. Mr Brainwash’s collection is a prime example.

Clarendon’s inaugural gallery opened in 2010 gracing an elegant space on Mayfair’s Dover Street and offering unique statement pieces for distinctive interiors. The response from collectors was overwhelming and their passion has driven the growth of the brand into more than 20 beautiful locations in London and beyond, and a vibrant programme of expansion is underway for 2022/23.

Specialising in both unique original works and collectable contemporary editions, the gallery has also built a superb collection from some of the greatest Modern masters working during the twentieth century, including Pablo Picasso, Marc Chagall, David Hockney, Andy Warhol, L.S. Lowry, and many others. Mr Brainwash is in good company.