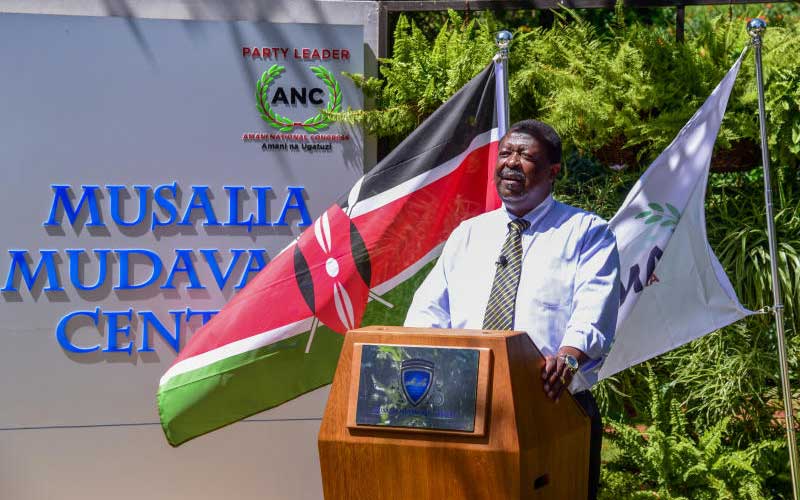 Amani National Congress leader Musalia Mudavadi (pictured) has said he is ready to work with Deputy President Wiliam Ruto on condition he endorses him for the presidency.
Speaking in Lugari, Kakamega County yesterday, Mudavadi said he was not going to play second fiddle to anyone in the race to State House.
“I am at liberty to work with anyone who has the same aspirations like ours, including the deputy president and other leaders. We are tired of being told that we are working for William Ruto. Let me say that we welcome Dr Ruto as long as he supports our bid for the presidency,” said Mudavadi.

The ANC boss has lashed out at leaders he claimed were out to create rifts between him and President Uhuru Kenyatta.
Mudavadi claimed some of the leaders have been using the police to disrupt meetings organised by ANC and Ford Kenya leaders in Western “but when put to task, they are quick to invoke the name of President Kenyatta,” said Mudavadi.
He denied claims that his meetings are meant to undermine the president.
Lugari MP Ayub Savula and his Lurambi counterpart Titus Khamala said they fully support President Kenyatta’s development agenda. “We ask the president to stop listening to propaganda being perpetrated by Mudavadi’s critics,” urged Khamala.
Mudavadi argued that such impunity could reduce the democratic space Kenyans have enjoyed in the past. “I will not allow that to happen, we must protect people’s democratic rights.” He spoke during a Western leaders consultative meeting where he said nothing would stop him from going for the top seat.

SEE ALSO: Why this pandemic calls for an honest discourse