Fact Check
Some social media users claim prolonged use of masks causes hypoxia, oxygen deficiency in the body and fatigue 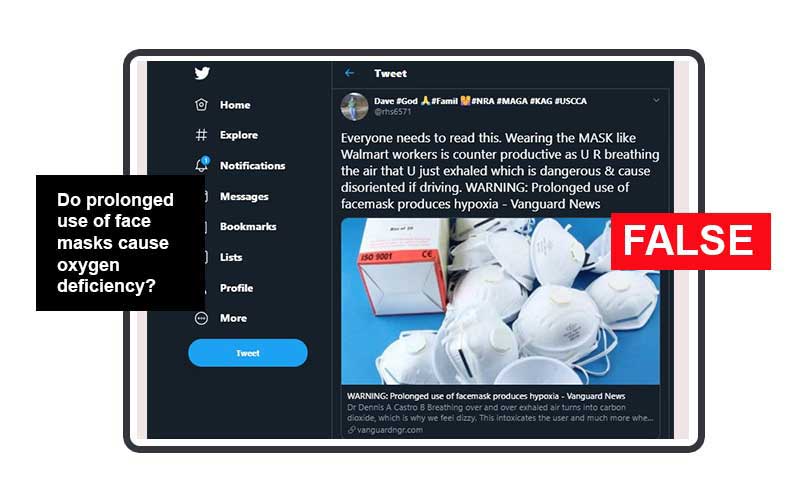 Face masks are the new normal for many as the world battles the coronavirus pandemic. And just as the other measures to contain the virus spread, masks have been riddled with scepticism.
In recent weeks, numerous social media users have claimed that prolonged use of protective masks causes hypoxia.
According to the hypoxia-physiopathology laboratory of the University of Grenoble, France, hypoxia is a condition in which the body or a region of the body is deprived of adequate oxygen supply at the tissue level.

“Breathing over and over exhaled air turns into carbon dioxide, which is why we feel dizzy. This intoxicates the user and much more when he must move, carry out displacement actions. It causes discomfort, loss of reflexes and conscious thought,” reads one of the posts widely shared on Facebook.
The claim is FALSE and misleading.
One can have hypoxia in different pathological situations such as during respiratory or cardiac diseases. Your whole body or part of it (tissue hypoxia) may be deprived of the necessary supply of oxygen.
In other instances, the imbalance may occur when the lungs are not able to oxygenate the blood sufficiently. This can happen for example during chronic obstructive pulmonary disease (COPD) or sleep apnoea syndrome.
With the coronavirus spreading through microscopic droplets, the rallying call across the world to prevent people from catching the virus has been wearing of face masks when in public.

Surgical and respirator masks have effective filters and have not been associated with lower blood oxygen content.
The misleading claims do not specify what type of masks cause hypoxia, but going by the pictures attached to the posts, the insinuation is on medical masks.
Dr Sam Oula, a consultant paediatrician and Chief Executive Officer of Guru Nanak Ramgarhia Sikh Hospital in Nairobi told Standard Digital Fact Check desk that the claims are false.
“There’s no evidence linking the use of masks and hypoxia. Hypoxia is simply the lack of sufficient oxygen reaching body cells and tissues. Body cells need oxygen for metabolism to generate energy for life and work,” he explained.
“Some of the common symptoms of hypoxia include confusion, elevated heart rate, rapid breathing and shortness of breath. Chronic hypoxia kills cells of the brain,” he added.

SEE ALSO: Banks choke under the weight of unpaid loans

Also, the United Nation’s World Health Organisation in its advisory on the use of face masks does not mention the risk of hypoxia.
Albeit, breathing in excessive carbon dioxide is dangerous for the body, cases of some people with pre-existing respiratory illnesses reporting health issues after prolonged use of tight-fitting masks or uncertified respirators are not foreign.
People wearing cloth or surgical masks are in little to no danger of breathing in unhealthy amounts of carbon dioxide.
Dr Oula explains that inhaled air contains 21 per cent oxygen, 78 per cent nitrogen and a very small percentage of mixed gases including carbon dioxide. Exhaled air has 74 per cent of nitrogen, 15 per cent oxygen, four to five per cent of carbon dioxide, with the rest being water vapour and other gases.
The amount of exhaled carbon dioxide is at least 100 times the amount in the inhaled air. This presents no problem with the use of face masks.
“When wearing a mask, there will be retained air within the space between the mask and the face that is rebreathed. But this air is mixed with good air that’s sucked in from the environment and what ends up in the lungs is very close to what should be. This close to normal air would not cause hypoxia. The body has ways of adjusting to fit within these small insignificant physiological variations,” Dr Oula said.
This is an initiative of the Standard Group to combat fake news, misinformation and disinformation. If there’s something you want us to look into, email [email protected]