The party has rubbished claims of a political witch hunt against the embattled governor, who is facing corruption charges.

ODM National Chairman John Mbadi said; “It Is foolhardy for Obado to attempt to claim political witch hunt.”
Mbadi was speaking on Thursday at Orange House, Nairobi where he also alluded that Obado is now trying to divert attention from his crimes by seeking sympathy.

“He must be starved of the sympathy he fervently seeks especially from the very people he has stolen from,” a stern Mbadi said.

The party believes that the case against the governor is serious enough to warrant his removal from office, adding that they do not condone corruption.

Claims that Obado is trying to convene a cabinet meeting at his rural home tomorrow (Friday) also surfaced, which the party sees as a move to undermine his deputy who will take over, should he be impeached.

ODM also added that it will protect the 37 ward reps who have signed the petition to impeach Obado, whilst urging the government to provide security.

On Tuesday, 37 of 41 MCAs agreed to back the ouster motion, after a consultative meeting with the party’s top leadership at Chungwa House.

Mbadi said the decision was necessitated by the fact that the Anti-Corruption Court verdict blocked Governor Obado from accessing his office.

“Due to corruption charges against Governor Obado and the decision by the court to bar him from accessing his office, the party, in consultations with County MCAs, has resolved to initiate a motion of impeachment against the governor and have his deputy take over,” he said. 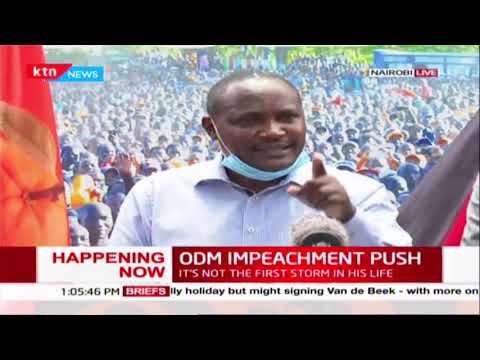 Charges
Obado and his four children, Dan Achola, Scarlet Susan, Jerry Zachary and Everline Adhiambo Zachary and other individuals have been charged with a conspiracy to defraud the Migori County government of Sh300 million.

He was arrested last week in Migori alongside his family, and arraigned in court on Monday.
Obado was then freed on Sh8.7 million cash bail. Together with his co-accused, they face 28 charges, among them conspiracy to commit an economic crime.