Munn admits that she’s not sure how her dogs will react to the new child, since they’ve been walking over her stomach.

Olivia Munn is in good spirits about having a child with comedian John Mulaney but admits she doesn’t know how her dogs will react.

Mulaney announced the upcoming birth Tuesday on “Late Night With Seth Meyers,” and Mario Lopez asked her about it Friday on “Access Online.”

The actor’s response suggests she hasn’t told her rescue dogs about the new addition yet.

“I’ve actually been really surprised. People tell me that your dogs can pick up on those kinds of things, but they’ve been walking over my stomach,” Munn told Mario Lopez. “They don’t care. They have no idea what’s happening.”

Although the pregnancy comes just months into her relationship with Mulaney, which came after he split with wife Anna Marie Tendler in a tumultuous year that included stints in rehab for cocaine addiction, she has found the experience positive.

“I’m feeling really good, and just the outpouring of love and support has been really amazing,” Munn said. “There’s been a big ol’ mom tribe that comes up. I’ve heard about it, but they really come up in full force. There’s a really great dad tribe, too. Everyone who comes up is really supportive, and it means so much to me.”

During the interview, Lopez tried to persuade her to wait until the birth to find out the child’s sex. She refused to commit to that.

“I haven’t decided if I’ll find out yet or not, but I’ll take that to heart. It’s a good surprise to find out; there’s very few surprises in life,” she said.

This will be the first child for both Mulaney and Munn, according to Today.com, which noted that Mulaney had previously said he had no interest in parenting.

Back in 2019, when he was still with Tendler, he told Entertainment Weekly that kids are great, “but I love what I do. And I love my wife and spending so much time with her and we have a really fortunate life. I get to travel, do stand-up, and our relationship is so wonderful. It’s just something I wouldn’t want to change.”

You can see the entire interview above. 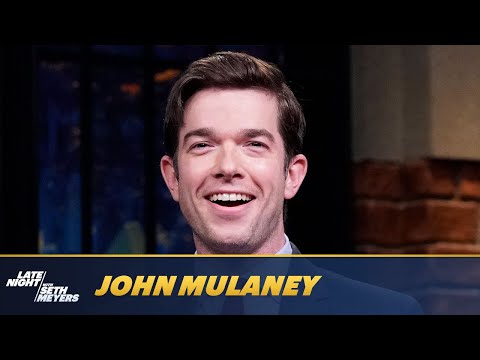