Politics
She sat before Jubilee Party disciplinary committee, meek as a mischievous child awaiting punishment, uncertain of whether or not to speak. 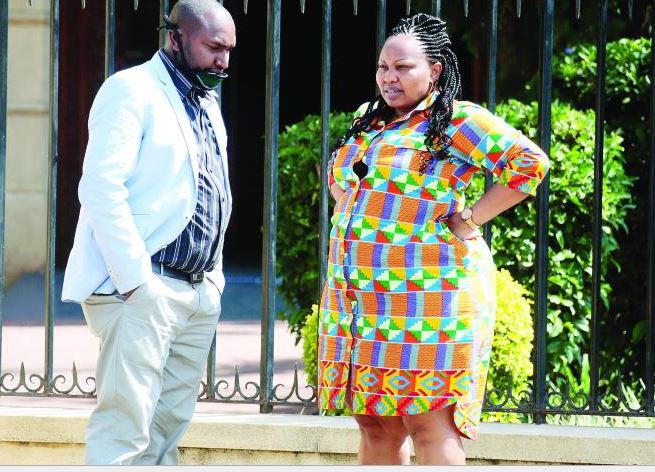 Poor Millicent Omanga (pictured right). Just as she had dared them, they brought it on and they paraded her like a criminal.

While she might have seemed to have a clear target in mind when she made the threat, her submission to the Jubilee Party disciplinary committee revealed that it might have been an open challenge.

“Perpetrators,” she responded when asked for whom the threat “bring it on baby” was meant, leaving it open for whoever dared to face her.

Sadly for her, the disciplinary committee took up the challenge. And boy did the ‘baby’ bring it on. The duel was sufficiently publicised and the media called in to capture every moment.

It wasn’t going to be a press conference and no one would be flanking her. There would be no buffer between her and the ‘perpetrators’.

There she was, all by herself, faced by masked men and women intent on ridding her of her fat pay cheque. She had noticed the first sign of trouble when, as she had said, a meeting meant to exonerate her turned into a retributive one.

She sat quiet, meek as a mischievous child awaiting punishment, uncertain of whether or not to speak. She would have done anything to save her skin. Yet, she appeared to embrace all the blunders.

“I did not see the message,” she said when asked why she had skipped a Jubilee Parliamentary Group meeting at State House a fortnight ago. She should have stopped talking, but her mouth had other plans.

So she went on, rambling as a cornered – again to borrow her words – ‘perpetrator’ would. “I have more than 7,000 texts,” she claimed. Yet in the same breath, she couldn’t receive any messages as “sometimes unapata simu yako imekatwa kama uko postpaid (sometimes you find your phone disconnected when you’re on postpaid).”

Poor Omanga. The nominated senator, despite her tribulations, made sure to cater to everyone’s needs. She spoke in English and when those who only understood Kiswahili felt slighted, she switched things up. And she was there for francophones too.

“Pardon,” she asked a question be repeated in a seemingly French accent, making sure the ‘n’ at the end of the word was silent.

She did not tremble but no amount of shaking would upstage her eyes. They appeared alert and sorry at the same time. She had them wide open and kept her blinking to a minimum.

It was as though she was afraid she would miss something, maybe another text, if she blinked. When she eventually blinked, her eyes fluttered uncontrollably, perhaps keeping stock until the chance would present itself next.

The first-time senator insisted on wanting to clarify matters and assured that she was happy to be before the disciplinary committee. Her mouth could say what it wanted, but her eyes had already let out the truth. She wanted the hearing to end. Soon.

Anyone with an ounce of empathy would have ended the grilling in the first 10 minutes as she was already sorry for her truancy. But not the disciplinary committee. ‘Sorry’ wasn’t good enough for them.

They wanted her shaken enough to avoid repeating her offence. They had paraded her for the public for this sake, and so that everyone would see her defeated. They wanted her humiliated.

They took turns at her, bullying her from all sides as they tore open the bag full of excuses Omanga had brought with her.

Her face was stripped of the confidence she wears when defending her allies and she occasionally looked like she would cry the next minute.

Her eyes, too, kept wandering, scouting for signs of remorse from faces that were hidden behind masks.
Her voice didn’t fare any better. She sounded nothing like the fiery senator from a few months ago. No vulgarities escaped her tongue.

Her repeated pledges of loyalty to the party appeared to have worked when her prosecutor, Senate Majority Whip Irungu Kang’ata, pleaded that she be spared from expulsion.

And while the experience may have been emotionally draining, it must have taught her one or two things about politics and even more on loyalty.

Four to be charged over Sh1 billion theft from Britam