Kenya’s 100m record holder Ferdinand Omanyala has finished fourth at his Diamond League debut at the Van Damme Memorial in Brussels on Friday.

Omanyala ran 10.02 seconds behind US sprinting trio of Kerley, Bromell and Norman who finished first, second and third respectively.

Kerley clocked 9.94 seconds to emerge the winner followed by Bromell with 9.97 and Norman with a season-best time of 9.98 seconds. 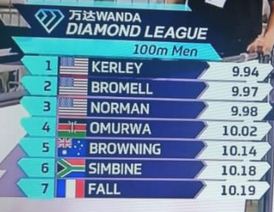 Omanyala, in the process, defeated South Africa’s Akani Simbine, the fastest man in Africa (9.84) in his debut.

The Olympic semi-finalist has been in fine form this year, breaking the Kenyan record consecutively, twice running 10.01, then 10.00 before breaching the 10-second barrier with a 9.86 run in Austria to become the first Kenyan to achieve this feat.

Omanyala is currently the joint second-fastest African alongside Namibian legend Frankie Fredericks but behind Simbine.