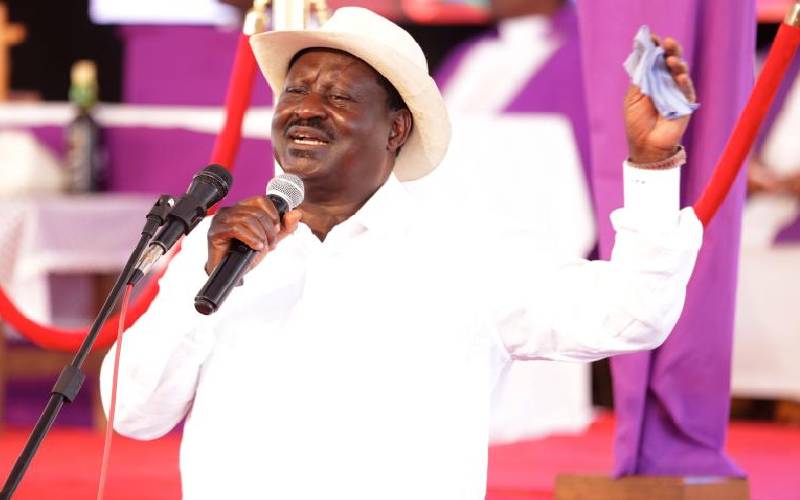 Opposition chief Raila Odinga has dismissed media reports that he met Kirinyaga Governor Anne Waiguru at night over her impending impeachment motion in the Senate in a last-ditch effort to save her.
In a statement sent to media houses on Sunday, Raila (pictured) hit out at the Daily Nation for publishing what he described as fake news after carrying a story of a meeting between the duo.
“I am deeply concerned about the false story published in the Sunday Nation today,” he tweeted on Sunday.

SEE ALSO: Nyeri leaders rally behind CS James Macharia over plot to kick him out of office

The ODM leader said that he did not hold any meeting with Waiguru, Kiambu Governor James Nyoro or their Nyeri counterpart Mutahi Kahiga as claimed by the publication.
“I did not meet Waiguru or Nyoro of Kiambu and Mutahi Kahiga of Nyeri to discuss the former’s ouster as reported in the Sunday Nation,” read the statement in part.
Raila said on June 11 that the publication claims the meeting took place,  he met Laikipia Woman Rep Cate Waruguru among other MPs but did not discuss Waiguru and her fight with Kirinyaga MCAs.
“I can confirm that at the said evening hours on Thursday referred to in the Sunday Nation lead page story, I had a meeting with Laikipia Woman Rep Waruguru in the company of some MPs, but the meeting had nothing to do with Waiguru,” he said.
The former Prime Minister said he updates Kenyans through various social media pages on his meetings and did the same on June 11 wondering where the Nation got their ‘other’ meeting from.

SEE ALSO: Is Waiguru on her own or will Jubilee politics save her?

“I routinely update the country on any such meetings and this would not be different if it had happened,” he said.
According to the Nation report, the two met at an unnamed posh club in Karen where Waiguru is said to have appealed for help from the ODM leader to rally his allies behind her when her motion comes to the Senate.
“It is not rocket science what the meeting was about. She wants to be saved at the Senate. He (Raila) was with his close allies and I don’t need to name names,” disclosed a source to Nation.
Mudavadi complaint
On Saturday, ANC leader Musalia Mudavadi also slammed the Nation for publishing a story about a meeting between him, Ford Kenya leader Moses Wetang’ula and Deputy President William Ruto to form a political alliance for 2022.

Mudavadi in his official twitter handle hit out at Daily Nation for distorting the reality to achieve his political opponent’s agenda.
“Is this what you call professional journalism? Your headline is a distortion of reality. Whose narrative are you pushing? Fake News!,” he tweeted on Saturday.
Daily Nation had reported that the trio was in talks over a possible political alliance ahead of the 2022 election with Ruto as the Presidential candidate and either Mudavadi or Wetangula to be his running mate.