Besieged former Sports and Heritage Cabinet Secretary Rashid Echesa kicked up a stink after he was charged with forgery in a case involving an alleged Sh39 billion fraudulent arms deal.

Echesa was arrested on Thursday last week following a complaint by two gun dealers who claimed he swindled them Sh11.5 million they had paid as ‘consultancy fees’.

But who is this man at the centre of a multi-billion scandal that is linked to a very senior government office?

The name Rashid Echesa was little known of until in 2018 when it appeared in the list of nominated Cabinet Secretaries to be vetted in parliament.

His name became the talk in town as people widely questioned his ability to step into the big shoes of his predecessor Hassan Wario in a docket that has been threatened by various scandals.

This was after a report by the Parliament Committee of Appointments revealed that Echesa underwent basic education only.

According to the report, Echesa went to Shibale Primary school in Mumias, Kakamega County between 1990 to 1997.
His critics had claimed that he was a class seven dropout, questioning his skills to run the Sports Ministry.

When he appeared before the committee, Echesa said he came from a poverty-stricken family where his parents could not afford to educate him and his seven siblings.

“I was born and brought up from a very humble background. My father was just a charcoal burner. My mom could walk like six kilometres away to go sell sweet bananas for us to earn living,” he said.

He added: “I found it difficult because my mom and dad were really struggling for the ends to meet and they were even unable to pay school fees for my siblings.”

Echesa said he was forced to quit school at an unspecified date to work as a labourer at Mumias Sugar Company. 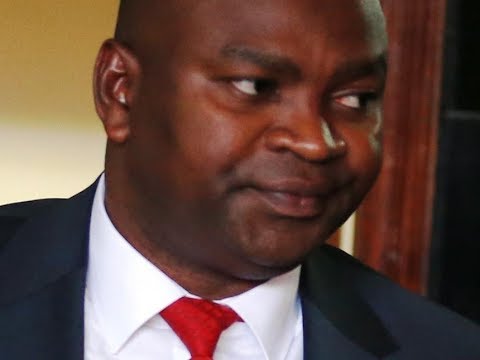 Despite his questionable academic qualification, the committee approved him.
“That though his academic credentials show that he only underwent basic formal education, his professional training and experience in sports and entrepreneurial and resource mobilisation are impressive,” the committee says.

Former MP Cicily Mbarire told him: “Your story is quite inspiring and indeed you are approved by this house. You will be the perfect of example to the youth that all dreams are valid.”

He was named Sports CS by   President Uhuru Kenyatta on January 26 2018.

Various reports published suggested that at the time of his appointment, Echesa was a boxer valued at “Sh40 million in fixed and movable assets.”

This, however, was refuted by Ex- Boxing Association of Kenya chairman John Kamata.

“I’ve heard some people say he is a former boxer. That is a big lie. According to our records, Echesa has never been a boxer. If he really was once a boxer, he would have had the interest of the sport at heart,” he said.

His reign as a CS was short-lived as he became a major casualty of President Uhuru’s cabinet reshuffle in March 2019 when Echesa was unceremoniously relieved his duties.

His tenure which was marred by national teams lack of financial support while preparing for major competitions was termed as unimpressive by many.

He was criticised for failing to implement the Sports Fund which was part of the Sports Act 2013 that was enacted into law during the tenure of his predecessor.

Among other failures was his fake promises on stadiums construction and renovations.

Echesa blamed the dismissal on former Prime Minister Raila Odinga whom he had dared to sack him.

“I want to dare you Tinga wherever you are come and sack me. If you are the appointing authority in this country come and sack me,” he had said weeks before Uhuru fired him.

Months after he was fired, Echesa would openly admit that he was illiterate when he was appointed a CS.

“Mimi vile nilipewa kazi ya uwaziri, unajua masomo ilikuwa chini kidogo, nikasema niende kwa ngumbaru (You know my education level was low when I was appointed cabinet secretary so I enrolled for adult education,” he said on Saturday, April 13.

After the sack, Echesa did not stop making headlines with his push for Deputy President William Ruto’s 2022 presidential bid.

In May 2019, Echesa was arrested alongside Kakamega Senator Cleophas Malala over killings by a criminal gang in Matungu village which claimed lives of 18.

The duo was questioned over claims that they are linked to activities of the gang.

Days after their arrest, Echesa moved to court accusing the Executive of using officers attached to the Directorate of Criminal Investigations (DCI) to harass and frustrate him.

He claimed to be unfairly being targeted over his political alienation.

He was arraigned today alongside three other suspects said to have been involved in the fake firearms deal.

What First-Time Managers Should Never Say

What Nutritionists Think Of TikTok Health Trends, From Healthy Coke To Lettuce Water

An oral history of USA-Iran at the 1998 World Cup: Political tension, teammate betrayal and humiliation